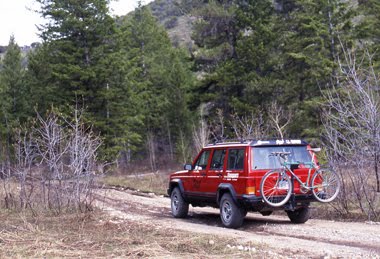 The idea of the Great Divide Mountain Bike Route (GDMBR) was born from a series of discussions between then-executive director, Gary MacFadden, and then-assistant director, Michael 'Mac' McCoy somewhere around 1990. Their idea was to take bicycle travel off road and into the mountains with a route that would roughly parallel the Continental Divide. For an excellent retelling of the history, see A Great Decade on the Great Divide (PDF) from Adventure Cyclist.

The intrepid Mac McCoy took on the task of researching every mile of the GDMBR in the Jeep Cherokee (pictured above) generously loaned to us by Missoula Jeep dealer, Flanagan Motors. Mac is a seasoned researcher for Adventure Cycling having been part of mapping and research teams since 1976.

One bit of information that Mac hadn't intended to test was whether or not a Jeep had the ability to swim.

"In June of 1996, I approached a Colorado creek crossing that did not appear to be terribly wide or deep. Still, for reassurance I switched into four-wheel-drive, then gunned it. The next thing I knew I was stopped dead in the middle of the stream, water lapping against the tailgate window. A sick and literally sinking feeling came over me. The starter motor wouldn't even turn over. So, I opened and crawled out the window, hoping to prevent gallons of water from rushing through the door opening, and struggled through the ice-cold, waist-deep current to dry land. After gathering myself, I elected to return to the Jeep, get my valuables, and grab my bike off the back rack. Then I would ride for help.

"After crawling back through the window, I decided to try again to start the Jeep. With the tailpipe submerged it was a no-go, but this time the stater turned. So I tried something I really didn't think would work: I shifted into four-wheel-low first gear, released the clutch and walked the rig out of the creek by turning the starter over with the ignition key - maybe 12 inches per step over at least 15 yards."

This story is only one of many that Mac gathered over the course of three summers of research, all of them adventure filled. If you ever run into him, be sure to ask to hear another tale from the Great Divide.

The GDMBR maps have also spawned a guide book, Cycling the Great Divide and two races, The Great Divide Race and the Tour Divide. And in 2004, a map of our route extension northward into Canada was published.

Number of states and provinces it crosses: 5 states & 2 provinces

Longest stretch without services on the Great Divide: 133.5 miles between Atlantic City and Rawlins in Wyoming. (The average rider takes 3 days to do this)

In this photo: The trusty Jeep Cherokee that doesn't quite swim.

Jenn asked if I would reply to your comment. Happy to do so.

Yes, I managed to the get the Jeep all the way out of the creek that way. Jenn didn't have room to tell the whole story (or maybe I never told it to her). While it was still in the creek, I made the super-dumb mistake of forcing open the upstream (driver's side) door, which permitted dozens, maybe even hundreds of gallons of water to flow into the Jeep. I got most, but not all, of it out by opening the doors after I got the Jeep out of the creek. Later, as I was on the downhill side of Gore Pass en route to Kremmling--where I took everything out of the interior that wasn't permanently fastened, and set it out in the sun to dry--water came rushing to the front from the back, reaching half way up my calves and submerging the foot pedals. I thought I was going to see trout swimming at my feet!

After it was all drained and dried out, the Jeep seemed no worse for the wear (could've been a good Jeep ad). To be honest, I may have neglected mentioning the incident to the dealership. But they expected it to go through the mill, which it did.

Seems like Mac has had some crazy times during his research. I have been stuck in my jeep many times but never in that much water. I didn't fully understand the end. Did he get the jeep completely out? How did the dealership that loaned it take the news?