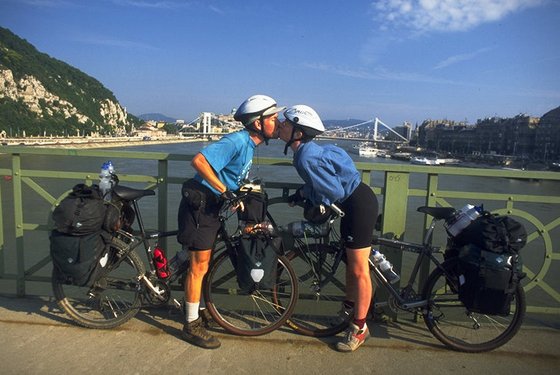 Romance is in the air. Three times this spring, at public speaking engagements, I've had an audience member ask, "What is your most romantic travel memory?"

It's hard to come up with just the right answer to many travel questions, but I never hesitate with this one. It was in Hungary.

Below is the transcript from the commentary that aired on public radio station KUOW in Seattle. It was later published in different forms and an expanded version can be found in the 2nd edition of Spokesongs: Bicycle Adventures on Three Continents.

Their voices filled the still night with such sweet harmony it sent chills up and down my spine. I squeezed Kat’s hand and we exchanged glances and smiles. Was this real? It had all of the elements of a dream.

We were being serenaded with a French love song by an all-men’s Italian chorus on a midsummer night’s eve, near a Greek Catholic church on a street corner of a village in Hungary.

It all began as we attempted to look through the large keyhole of an ornate church. The groundskeeper spied us and unlocked the sanctuary. As we gazed up at the Byzantine-styled frescos painted on the walls and ceiling he went on and on about a concert. The only thing that we understood for sure (our Hungarian limited to two-word phrases almost entirely related to food) was the event was that very evening.

Was it to be a local children’s choir? The history of Hungary as interpreted by a mime troop? Traveling Scottish bagpipers? We had no idea, but we took a chance and waited for evening while drinking abysmally bitter cups of coffee in the local sweet shop.

We changed into our formal attire in the city park. “Formal attire” while on a multi-month bicycle journey often consists of a clean, wrinkled T-shirt, shorts and sandals with socks.

Our under-dressed anxiety was relieved by Father Ernst, who greeted us wearing a long black robe descending to bright white sneakers.

The group of men who filed into the now crowded church were members of Coro Monte Pasubio, an award-winning choral group visiting from Italy. We were treated to an hour of the finest singing I have ever heard. The audience applauded enthusiastically for encore after encore.

Having secured our bicycles in the church’s schoolhouse, we wandered into a restaurant after the concert. In a back room seated at an enormously long table were the members of the chorus and their local supporters. Several people waved us in and we entered to smiles and applause. News of our bicycle journey had spread.

We sat down to glasses of red wine and seltzer. Franco, one of the choir members who spoke English, acted as our interpreter as we answered questions about our trip. At one point we let slip that we were engaged. A week prior I had asked Kat to marry me as we gazed across the Danube at the grand parliament building in Budapest. We hadn’t even told our parents yet. But somehow it seemed appropriate to divulge our secret to this man with the voice of an angel.

We drank more wine and listened to more songs, wishing the evening would never end.

Two of the last to leave, we exited the restaurant only to find the entire chorus gathered in a semicircle facing us. Franco smiled and said, “It’s your fault. You told me you were engaged. Now we Italians, being romantics, must sing for you.”

The basses, baritones, and tenors all found their notes, then broke out in laughter after a phrase, discovering they had begun in the wrong key. The second attempt was flawless. As they serenaded us with the French ballad Les Plaisirs (The Pleasures), some smiled warmly at us, others simply closed their eyes.

We were touched, awed and somewhat embarrassed all at the same time. Each of the members came up to us afterward and wished us a safe journey and much happiness. The leader presented us with one of the group’s cassette tapes and his comments brought a chorus of laughter. Franco translated, “He says you must listen to this tape before or after les plaisirs…it is a collection of our church songs after all.”

Then they were on their way to Debrecen and their next engagement, leaving us to bask in the glow of our own personal midsummer night’s dream.

We may never top the event above. But it sure will be fun trying.

The audio below is from the church concert earlier that evening. I didn't record the song outside the restaurant. Both Kat and I were in romantic shock.