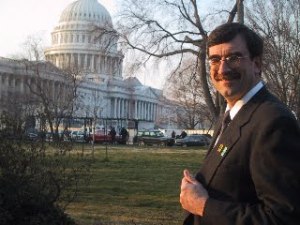 Meet Tony Barrett, adventure cyclist extraordinaire and an incredibly devoted advocate for bicycling in the state of Maine -- and beyond. Tony and I had little time to catch up this year at the National Bike Summit in Washington, DC so when we returned to our respective home states, we conversed about his support of the U.S. Bicycle Route System (USBRS).

How did you first hear about the U.S. Bicycle Route System?

Bruce Burgess of Vermont showed me hand-drawn maps and directions for Bike Route 1 developed in the late 1970s.

Just after graduating from high school in 1971, my father and I rode bicycles from New England to Washington, DC. We rode on limited-access highways, down the length of Manhattan via Broadway and got stuck on New Jersey bridges that didn't allow bicycles. Our only guide was highway maps. It was a memorable trip, my last with my father, but oh how much easier would it have been following USBR 1.

What is your relationship to Adventure Cycling?

I was working construction in Colorado in 1976 and saw the Bikecentennial riders. I wanted to join them but needed to earn money to finish graduate school. But the dream of riding cross-country lived on. In 1998, after spending 6 years overseas, I fulfilled the dream and rode the TransAmerica route from West to East. What a great way to reacquaint oneself with America. I have been an Adventure Cycling life member ever since.

League of American Bicyclists, East Coast Greenway Alliance, Rails-to-Trails Conservancy, Alliance for Walking and Biking, my local bike club (Merrymeeting Wheelers Bicycle Club) & my state advocacy group (the Bicycle Coalition of Maine) -- I am proud to be a member of these organizations which deserve support from all of us. 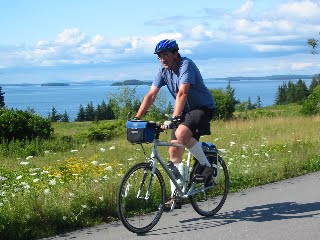 What corridor are you working on? Where does it go?

USBR1 & 1A pass through an amazing diversity of natural and cultural history utilizing 600 miles of nice roads and shared-use paths in Maine. From coastal communities and historic mill cities to Down East blueberry barrens and the gateway to the Canadian Maritimes, travelers will experience some of the best Maine has to offer. USBR 1 will take you by some hidden gems like a giant wooden chair, a statue of Paul Bunyan, a hand-built stone fish ladder, the shop of the oldest and most prolific chainsaw artist in America, as well as views of rivers and coastal harbors, a moose or two, and plenty of opportunity to eat lobster."

How are you involved?

I am a volunteer working with about a dozen other volunteers assisting Maine DOT to finalize and prepare its Bike Route Designation application to AASHTO.

Who else is involved in developing the USBR 1 route?

Hundreds of people in about 20 "town hall" mapping sessions applied their local knowledge in developing the USBR 1 and 1A routes. The routes offer an alternative to traveling on US Highway 1 and are fairly direct, expose the traveler to scenery or a destination that wouldn’t otherwise be experienced. When choosing a longer route on lower-traffic roads, people ask is the’ PAIN WORTH THE GAIN’? No gratuitous extra miles just for mileage sake. Fortunately, Maine has many local “nicer” roads, which offer a varied traveling experience for little deviation from a direct highway route."

Tell us about the statewide bicycle advisory group you work with and the relationship with the Maine Department of Transportation (DOT)?

The Bicycle and Pedestrian Advisory Council works with the Bike/Ped Program DIrector of the Maine DOT. This council has been reviewing the development of the USBRS in Maine.

What is your long-term hope for this national system?

Increased bicycle mode-share in our transportation system and increased tourism using bicycles -- which is the best way to experience America.

BUILDING THE U.S. BICYCLE ROUTE SYSTEM is posted by the Travel Initiatives Department and focuses on news related to the emerging  U.S. Bicycle Route System (USBRS).