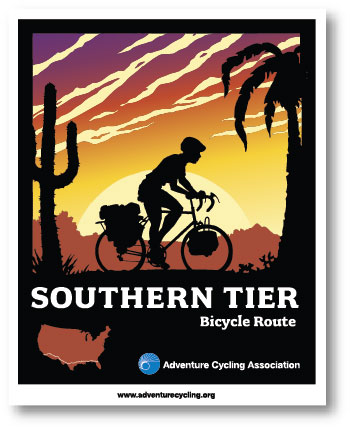 Earlier this year we released the first of our route-specific mobile apps for navigating the TransAmerica Trail, Bicycle Route 66, and Pacific Coast routes, followed by the Chicago to New York City (CNYC) route a few months later.

And today, I am happy to announce a fifth addition to our route app family, the Southern Tier Bicycle Route, just in time for those planning to ride this venerable, cross-country route as an autumn or winter adventure. Leave your navigation worries behind! 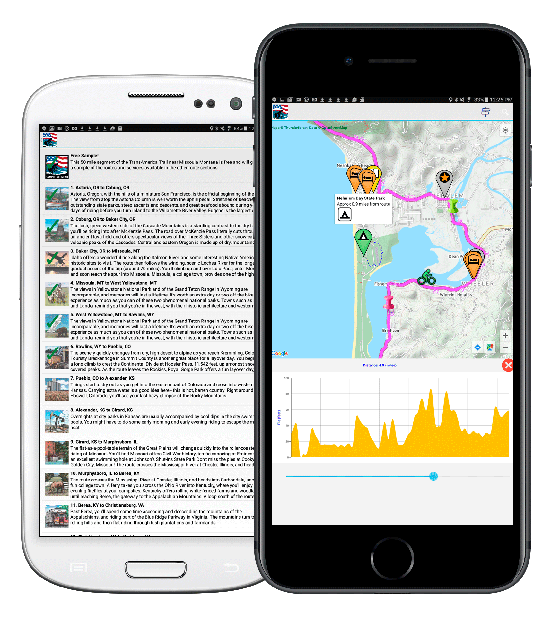 Along with the Southern Tier, our app developer, Steve Resnick, has recently updated all of our route apps with a wind speed and direction layer. Will it be a headwind? Tuck in and pedal on. Or will you enjoy a tailwind, ensuring smooth sailing for a bit? And then there’s the possibility of a side wind. Will it blow you towards the road or the shoulder? It’s all good information to psych you up for the miles ahead.

Very importantly, the Southern Tier and Pacific Coast apps have an exclusive feature: a severe weather warning events layer. This would have been especially handy during hurricanes Harvey and Irma. And while the West burned with wildfires this summer, this information will be practical for potential winter landslides along the California coastline.

Note: The weather-warning feature will go live in the Pacific Coast app the week of October 2, 2017.

Speaking of those extreme weather occurrences in Florida, bear in mind they will have left a lot of damage in their wake from washed out roads to closed or reduced services. These areas — from Jacksonville to Daytona and Fort Myers through the Keys, as well as many in between — will be recovering from the effects of the storms for months to come. Additionally, in Texas some roadways have been affected due to residual flooding.

Where repairs are being made, know there is a ripple effect. Often, visiting, temporary workers tax the available services. Campgrounds and lodging options could be full, and supplies at convenience and grocery stores may be experiencing higher demands.

And Don’t Forget Our Forums

Beyond the app’s severe weather warning layer, you’ll also want to monitor our forums, forums.adventurecycling.org, and specifically this board: Temporary ACA Route Road Closures. Adventure Cycling’s Routes & Mapping staff often post gathered information here, and we encourage you to do the same, but the best information you’ll find here comes from area cyclists and concerned locals.

Please comment below! How many of you are planning a ride on the Southern Tier this fall or winter? 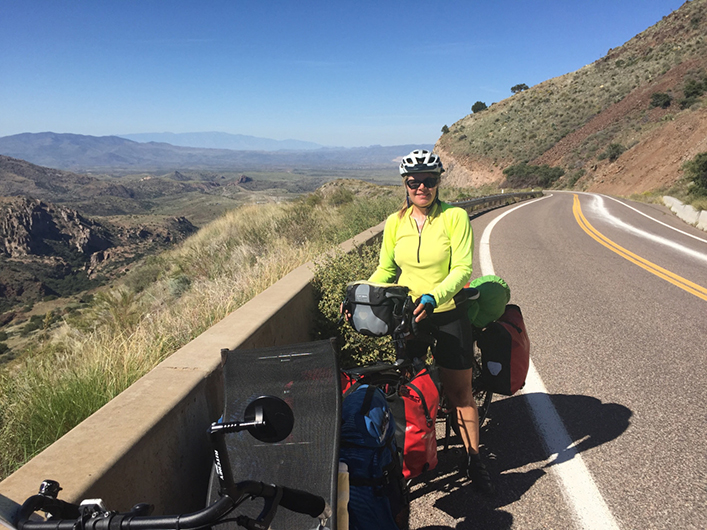 My wife and I plan on starting the southern tier in Sept. 2020.

I'm doing the southern tier backwards. I'm just about through Mississippi and I've had to go off course because of the distance between hotels is too far for me. I'm only doing between 20 and 40 miles a day. But it's been quite an adventure. I'm having the time of my life.

I'm glad you are having a great experience out there on the Southern Tier! Keep on keeping on!

I purchased a segment of the Southern Tier and I'm curious if your app offers the option of using the route on Google maps. The map base layer is openstreetmaps. Is there a way to change it?

No, unfortunately the digital data and the app are separate products.

This is great! Thank for developing this. I am currently riding down the east coast and will be getting on the Southern Tier as winter hits. This is especially helpful for me!!

Way too cool. Waiting for all the cycle routes to come out in digital format. Issues... 1) do the digital versions get automatic upgrades when corrections are made? You you do a major ride upgrade, can users upgrade for a discount price? 2) can you eventually have the maps on OpenCycle & USGS so that a larger picture of the ride can be had... and also that those maps could be uploaded for when the cyclist looses wireless communication (sort of like Guthook does for backpacking trails such as the PCT) 3) I always like paper maps, even when using digital. Will you come out with a reduced price digital/paper combination package for sale? I hope so, since I plan on doing the TransAm next year. 4) Will you ever offer your other guided tours in a for purchase format? Too often, when I do a guided tour with the ACA, the tour leader is in a panic to generate the digital ride before the start date. Why not just offer them for a small price with an overlay to nice maps? Just a few suggestions. By the way, you all are way too cool, and are one of the few organizations I am proud to be a life-member of. Ken Feucht

Thanks for the enthusiastic response to the app release! I'll answer your questions below.

1) Yes, upgrades are available within the app whenever we make them.

2) OpenCycleMap is one of the base map layers you may choose to have the route overlaid on. Also, map download is possible so it may be used even when you don't have a cell signal.

3) The apps are free and route purchases happen through the app itself, not through our sales system. The map sections are only $4.99/ea so not a large investment.

4) At this time we do not sell our Tours routes, digitally or otherwise. Offering the tour routes in a digital format is at the discretion of the tour leader and many do.

For more information (and links to the apps), see our app page:

I hope this clears things up for you!