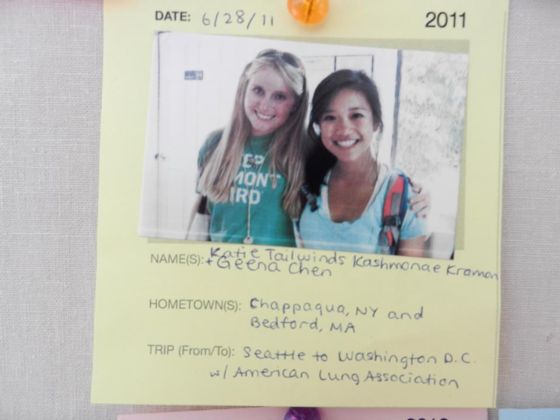 Meet Katie Kramon, Adventure Cycling’s newest intern who is working on various projects with Development, Travel Initiatives, and Tours. She has been a bike-touring junkie since her first cross country ride in 2009, a self-contained trip from Savanna, Georgia, to Santa Monica, California, that raised money for the Fresh Air Fund in New York City. Her second ride was two years later after graduating high school: a fundraising ride with the American Lung Association from Seattle, Washington, to Washington, DC. The next bike tour is always on her mind, and she uses breaks from school to do shorter rides along the Pacific Coast—biding time until the next cross country ride. She is a student at Stanford University and is taking a “gap year,” to work, travel, and do some out-of-classroom learning. Above is a picture taken in 2011 when she stopped at Adventure Cycling on a cross country tour with her friend, Geena. Working at Adventure Cycling this spring is a dream come true for her.

Tell us about your background.

I’m from New York originally, and moved to the California Bay Area in 2011 to attend college. I completed my freshman and sophomore years studying earth systems. I had dreamed of taking a gap year since high school, and decided the halfway point of my undergraduate education would be a great time to do it. In the fall, I worked as the Historical Wildlife Populations Research Intern at the American Prairie Reserve in Bozeman, Montana. I fell in love with Montana — its natural beauty and its wonderful people! I traveled in Europe and India for three months, before finding a way to return to Montana: working at Adventure Cycling in Missoula. I will return to college in the fall and will miss the bike-loving environment here tremendously!

How did you find out about Adventure Cycling? Why do you want to work here?

I found out about Adventure Cycling on my second cross-country trip, when we rode through Missoula and had a buffer day in town. We visited the Adventure Cycling office, and were thrilled from the moment we went in the front door, with its bike-handlebar door knobs. We had our picture taken, talked with the friendly office staff, and were inspired to buy Adventure Cycling maps for future trips.

Tell us about your experience bicycle touring.

My first tour was when I was 16 years old with Overland Summers, an outdoor trips company that caters to students 10-18, based in Williamstown, Massachusetts. We rode self-contained from Savanna, Georgia, to Santa Monica, California, dipping our tires in the Atlantic Ocean on day one and in the Pacific on the final day. We rode 83 miles a day through intense heat, and it was the most fun I had ever had! Two years later, a friend I met on my first trip (Geena, she is in the photo with me) joined me for the American Lung Association Big Ride Across America. Participants were ages 16 through 72, and it was wonderful to experience a northern version of our first trip — this time West to East. The next summer we rode Boston to Montreal, and over spring break we did San Francisco to Santa Barbara. That has become a favorite ride of mine, and I have repeated the route. At the beginning of last summer, I took two friends new to touring on a trip from Seattle to San Francisco, covering more of the Pacific Coast by bike. I hope to bike across every U.S. state border to border. The good news is that I’m only at 25 states. There are many more to enjoy!

Tell us about your interest in bicycle advocacy.

Bicycle touring was an incredibly formative activity for me, and I hope to get more folks under 30 involved in the incredible sport. What an amazing way to learn about the world, and yourself.

What are some of your hobbies?

I live in a 53-person vegetarian cooperative house at school. We decide everything by consensus, cook and eat meals together, run a house garden, and body paint on special occasions. It is a wonderful community that I am proud to be a part of.

A perfect world would include or be ...

Trike-Centennial: 2076, when everyone bikes across the country on trikes!