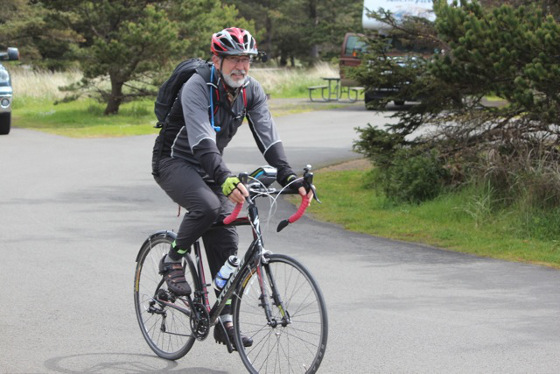 Meet John Pope, a volunteer in Washington State working on the U.S. Bicycle Route System (USBRS). John is an extremely valuable asset to the USBRS effort. He brings years of experience sitting on the boards of both the Bicycle Alliance of Washington and his Regional Transporation Planning Organization. He's also toured extensively, having traveled by bicycle all over the western United States. Due to John's hard work over the last two years and his unmatched persistence, Washington may be able to designate U.S. Bike Route (USBR) 10 later in 2013. Here's our recent interview with John about his work and the development of the U.S. Bicycle Route System.

How did you first hear about the U.S. Bicycle Route System?

Several years ago while I was helping put together the regional bike map for Skagit County, I contacted Ginny Sullivan and she got me going. I used the USBRS concept to help justify two safety improvements: one on the Coast Millennium/Pacific Coast route and the other on the Adventure Cycling’s Northern Tier route. In the latter case, we began using regional route signage and adopted “10” as the regional designation for a segment that will become part of USBR 10.

I volunteered as soon as I heard that the Bicycle Alliance of Washington was going to work on it with the Washington DOT (WSDOT). I was a new Alliance board member at the time, and I took it on as my personal challenge.

What corridors and routes are you currently working on?

I asked and attained approval from the Washington DOT to pursue designation of USBR 10 as the state's first U.S. Bike Route. I petitioned the executive director with a concept map that included all the Adventure Cycling Association routes, plus a number of other routes on principle river and coast corridors.

USBR 10 is now regionally designated through Skagit County, with resolutions of support from the municipal and county engineers in Anacortes to the Cascade Mountains. The route is straightforward over the Cascades because it follows SR20 with no parallel road existing. Only three more counties need to sign resolutions of support before Washington DOT can apply for designation through AASHTO.

What is your relationship with Washington DOT?

I love my local planning group and our state bicycle and pedestrian coordinator, Ian Macek. As an experienced engineer who has been involved in regional transportation issues for decades, I have worked closely with lots of WSDOT folks with generally good results. I have a few heroes in WSDOT including the local WSDOT engineering manager. We have solved some tough problems in this region, including minimizing rumble strips and using innovative methods for getting cycle crossings at state highways.

What is your long-term hope for the USBRS in Washington?

We should be filling in the grid by designating all the U.S. Bike Route System corridors and more!