Meet Bonnie Winslow: Getting Her Kicks on USBR 66 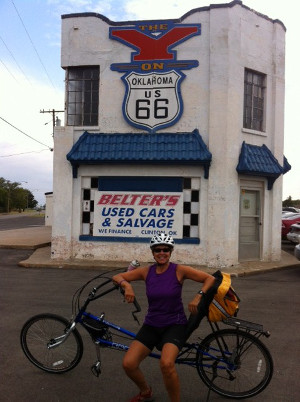 Meet Bonnie Winslow, a volunteer for the U.S. Bicycle Route System (USBRS) in Oklahoma. Bonnie has been working feverishly to designate U.S. Bike Route 66 (USBR 66), which will follow the corridor of one of America’s most historic roads: Route 66. Working in partnership with Adventure Cycling, the proposed route for USBR 66 aligns with the same roads being mapped for Bicycle Route 66, which will be released by Adventure Cycling next year.

There are a large number of cyclists from across the globe looking forward to riding the Mother Road, and Bonnie, with the aid of several others at the Oklahoma Bicycle Coalition (OBC), is working hard to make U.S. Bike Route 66 official. Recently we interviewed Bonnie about their efforts.

How did you first hear about the U.S. Bicycle Routes System?

Ginny Sullivan, director of travel initiatives at Adventure Cycling, gave a presentation on U.S. Bicycle Route System at a Bike Summit in 2011. I had been interested in cycling Route 66 and attended the summit to hear Ginny’s presentation.

After hearing about the possibilities from Ginny, I approached Kevin Musset, former Oklahoma Bicycling Coalition president, about assisting in the effort.

While this wasn’t my initial reason for involvement, I met a young Korean cyclist at a campground on Route 66 in Amarillo, Texas, last spring. His English was limited, but I could tell he had had quite a trip since leaving New York. He seemed a little road weary, and didn’t know what to expect ahead. Meeting him reinvigorated my commitment to get Route 66 established as a U.S. Bike Route.

Under the auspices of the Oklahoma Bicycling Coalition, Kevin Mussett, Bill Elliott, and I have spent nearly two years working towards the designation of Route 66 as a U.S. Bike Route through Oklahoma. Although the Oklahoma Department of Transportation (ODOT) is responsible for the nomination of the route to AASHTO, early on ODOT chose not to participate in mapping or nominating the proposed route. As OBC volunteers, we took on validating the proposed route, developing grassroots support from the communities along the route, and communicating with ODOT towards a future nomination. We visited officials in 24 communities, presenting at city council or board of commissioner meetings, and ultimately received 19 support letters or resolutions. We also received letters of support from organizations that are directly linked to Route 66 tourism in Oklahoma such as visitor bureaus or Route 66 museums.

What is the current status of the Oklahoma DOT’s support?

Their bicycle and pedestrian coordinator is interested in the project and always willing to discuss what we are doing. He has been involved in multiple conference calls and provides good feedback on how we might approach things.

We continue our discussions with ODOT toward nomination, hoping to gain their support, and they have received grassroots letters of support. Recently, we sent an issue paper to ODOT, addressing their concerns regarding liability of designation.

What is your long-term hope for the U.S. Bike Route System in Oklahoma?

Route 66 would be the first U.S. Bike Route through Oklahoma. As the highway crossroads of the nation, it makes sense that other U.S. Bike Routes in Oklahoma should also be considered. While the designation of U.S. Bike Route 66 is our first and biggest goal, there are other great cross-state routes that link historical and scenic way points, which could bring additional bike tourists and tourism dollars to our state.

(Note: We're happy to report that Bonnie is safe after the devastating tornado in Oklahoma. Our thoughts are with everyone impacted by this terrible storm.)

Thanks go to Adventure Cycling who started this initiative and motivated Kevin, Bill, and I to do this. Kevin and Bill must share in the success and hard work put toward this. Anyone interested in Oklahoma USBR 66 or other routes established in Oklahoma, please let your state representatives, and the Oklahoma Department of Transportation know.