Map It and They Will Come

On May 10 of this year, I received an email on my personal account (as opposed to my Adventure Cycling account) from Don Hollingshead of Alberta, Canada. In his message, Don wrote:

Hi Michael,
I’m trying to track you down to invite you to speak at a cycle tourism conference this Sept. 17 and 18 (2016) in Canmore, Alberta, Canada. If I have the right Michael McCoy, as instigator of the Great Divide Mountain Bike Route (GDMBR), you may be interested to learn that an important trail that bypasses the gravel Smith Dorrien Road will be completed this summer. Known as the “High Rockies Route” the trail connects Goat Creek with Lower Kananaskis Lake in Peter Lougheed Park. The High Rockies Route will form an important link in the Trans Canada Trail, scheduled for “connected” status on July 1 2017 (Canada’s 150th birthday). Please let me know if I have reached the right Michael “Mac” McCoy and, if so, if any of this interests you and whether you would like to speak at our conference.

I assured Don that he had found the right Michael McCoy, and that I would indeed be interested in his kind offer. First I had to point out, however, that Adventure Cycling has a three-person department, known as Travel Initiatives, that specializes in topics like bicycle tourism. Wouldn’t he rather have one of those experts speak at the cycle tourism conference?

No, Don and his colleague on the speaker selection committee, Karly Coleman, both assured me. They were interested in having attendees at the Alberta Bike Conference learn about how the GDMBR came about. 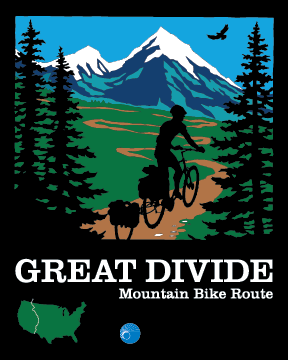 So, in the weeks leading up to the conference, I put together a slideshow and talk, titled “Connecting the Dots: Map It and They Will Come” and subtitled “The Genesis of the Great Divide Mountain Bike Route.” The presentation was somewhat of a hybridized version of ... 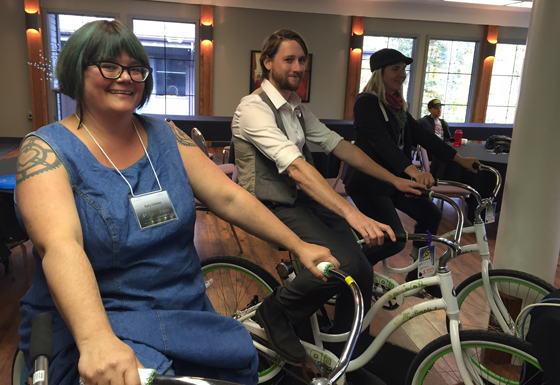 Conference M.C. Karly Coleman of the Alberta Bicycle Association (left) joins Brad Curtis and Lyndsie Plowman from Music is a Weapon! on their power-generating stationary bicycles.

A lot of the other presenters at the conference represented cities, provinces, or national/provincial parks. Not surprisingly, there was a lot of talk about raising money and building infrastructure. I summarized my message, which was a bit of an anomaly for the conference, like this: “Perhaps the biggest lesson is that this particular tale is not a story of ‘build it and they will come.’ It was already built; the roads and tracks were all there. No new rights-of-way were needed or secured, no new bridges built, no new trails cut. We simply had to tell riders where the roads and tracks are, and make them relatively easy to find and follow. So this is a tale of ‘find dirt and gravel roads, connect the dots, put them on a map, promote the dickens out of it, and they will come.’”

Later on the afternoon of my morning presentation, Ryan Correy followed suit by speaking on “The Emergence of Bikepacking in Canada.” In addition to other feats of cycling endurance, Ryan has twice raced the Tour Divide on the GDMBR.

In addition to enjoying the two-day conference, I got a real kick out of visiting the venue where it was held: the beautiful Bill Warren Training Centre just outside Canmore. It’s the location of the Nordic trails where the cross-country and biathlon events took place during the 1988 Calgary Winter Olympic Games. I was a spectator back then, and this was the first time I’d been back to the venue since. It was obvious that the trail system, which includes summer mountain bike trails and roller ski trails, has evolved into a major training ground for Canadian athletes.

I left Alberta, aka “Wild Rose Country,” feeling positively positive about what’s happening in our neighbor to the north in regard to bicycling and cycle tourism. My only disappointment? While I enjoyed the bustle of downtown Canmore and its many boutiques and bistros, it wasn’t until the morning after my third night at the Coast Canmore Hotel — as I was leaving for the Calgary airport in my rental car—that I discovered the Grizzly Paw Brewing Company hidden on a side street about a hundred yards from the hotel.

Oh well, one more reason to plan a future visit to this beautiful place on the east slope of the Canadian Rockies.

All Photos by Mac McCoy.

I am looking for bike map info from Tampa to Springfield mo. Thanks Kevin

Unfortunately, we do not have a route with those specific endpoints. I suggest you take a look at the routes we have mapped to see which parts you could potentially use. You can view an interactive map from the page below to see our network and how it intersects with itself. From the interactive page, you can also download an Overview Map (pdf) to print:

The next step is to get in touch with the bicycle coordinators for the states in which you will be traveling through and need routing. Many have online resources as well as printed materials. Nearly every state publishes a bicycle map of some sort that they will send out for free and the coordinators often have more information they can distribute for no charge as well. And while the maps aren't as detailed as ours, they generally offer suggested roads for cycling through their state. Here is a link to the contact information for all of the bicycle coordinators and some online materials:

For more tips and ideas on how to create your own route, see this blog post on the topic:

Once you have an idea of routing, you might want to solicit feedback and refinements from the community of cyclists on our Forums.