This is the third in a series of three, describing Routes & Mapping’s execution of the strategic plan statement to, “Improve and update the Adventure Cycling Route Network.”

This week, we discuss a reroute conducted on the North Lakes Bicycle Route in Michigan and Indiana.

Since May 2012, when AASHTO approved the 500-mile U.S. Bicycle Route (USBR) 35 in Michigan from Saulte Ste. Marie in the Upper Peninsula to the Indiana line just east of New Buffalo, we had been interested in realigning the North Lakes Route to match.

Though in large part, the USBR 35 routing brings cyclists close to the shores of Lake Michigan and we wanted to follow it, there are a few stretches in the far north of Michigan that are a bit more distant from the shore. In those cases, we had route researcher and tour leader Dave Cox investigate roads closer to the lake.

In addition to wanting North Lakes to align with USBR 35 as much as practical, we had also been hearing of the sprawling growth in the Fort Wayne, Indiana area. We received feedback from seasoned bicycle travelers Joy Santee and Jeff Lee:

“I [Joy] created our route from our Illinois home to Monroeville, IN, where we got on the North Lakes Route. Jeff and I have done lots of touring on a lot of routes (mostly Adventure Cycling routes, though some of our own, too), and we decided, hands down, that the riding around Fort Wayne and where the route tries to go between Kalamazoo and Battle Creek was some of the most unpleasant riding we'd ever done. It seems that all 3 of those cities, plus Grand Rapids farther north, have sprawled since the route was created, so what was probably a pretty good route even 10 years ago is now really dangerous in a number of spots because of traffic speeds and volume. We spent 4 days on the route and then abandoned it … because we couldn't find a safe way out of the Saranac area. We are pretty experienced — Jeff's ridden the Atlantic Coast, Northern Tier, TransAm, and a lot of his own routes, and I've done the Underground Railroad, TransAm, my own routes, and a good amount of urban riding, and if we felt it was too dangerous, I can't imagine what a less experienced cyclist would think. We were there in early July, which would see some increased summer and holiday traffic anyway, but I thought the route was too dangerous to ride regardless.”

This additional feedback spurred us to make this reroute a reality. With the fall of 2015 designation of USBR 35 in Indiana, we were able to use that routing to connect with the Northern Tier Route in Denver, IN. Unfortunately, this leaves Monroeville, one of the premier Cyclists Only Lodging and Camping locations, off the North Lakes Route. It also leaves about an 80-mile gap between the North Lakes Route, Section 3 and Northern Tier Route, Section 9. 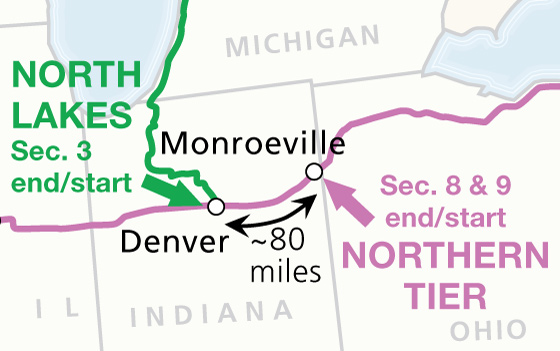 If you are purchasing North Lakes, Section 3 and Northern Tier, Section 9 with the intention to connect them, you will want to download a .pdf file of the map panels that cover the distance between Denver and Monroeville. We are looking to see if there may be an alternative route from the Indiana border, south of Fort Wayne, to Monroeville to maintain the continuous nature of these routes. The .pdf file is also available via the addenda/map updates and corrections for Northern Tier, Section 9.

Some of the highlights of this route include the Tunnel of Trees on SR 119 through Harbor Springs north of Petoskey and passing the historic Legs Inn in Cross Village.

And while there is no shortage of water views through the plethora of lakeside vacation towns — Harbor Springs, Petoskey, Traverse City, Glen Arbor, Onekama, Ludington, Saugatuck, South Haven, St. Joseph — you may be surprised to come across the occasional farm house or two set in a picturesque pasture.

If you’re in the mood to lock up your bike for a few hours, the Sleeping Bear Dunes National Lakeshore is a great place to stretch your legs and take in the lake from another vantage point.

There has never been a better time than right now to join Adventure Cycling. When you join, you're helping support programs such as route updates, as well as receiving a multitude of benefits. Throughout the month of January, first-time members will receive a free 2016 Adventure Cycling calendar in their new member packet, entry into weekly drawings for products and services donated by our corporate members, and a chance to win a limited edition Salsa Marrakesh touring bike! For complete details, check out our online join form.

I am trying to plan a summer ride 2021 with my 11 year old granddaughter. I will be 75. I want advice on a good ride. About 300 miles, not too hilly, not too much traffic, maps available, good and/or historic vistas. My husband will sag us so I would prefer a road ride rather than a trail. He lost us on the C and O Canal trail!

When will updated way and service points become available for the updated major reroutes?