Loop Routes on the Underground Railroad 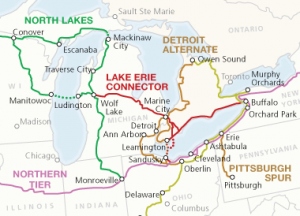 With the release of the Underground Railroad (UGRR) Detroit Alternate Section #2, a number of loops in varying distances can easily be created by mixing and matching routes in the region. As I pencilled out the following three ideas, I was reminded of playing Yahtzee — a great travel game, by the way — and present them with that theme in mind: 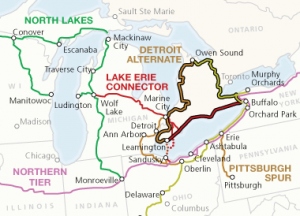 Small Loop: You could begin this route either in Buffalo, New York or keep it all in Canada and begin/end in Toronto, Ontario finding your way to the main UGRR route. This trip would take in the northern shore of Lake Erie as well as the southeastern shore of Lake Huron, historically-rich Owen Sound and multiple sites in between. To complete this 670 or 880 mile tour, you'll need UGRR Detroit Alternate Section #2, Lake Erie Connector, and UGRR Section  #5 maps. 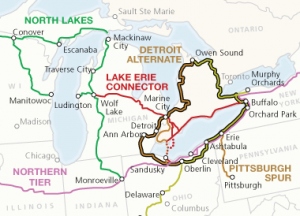 Large Loop: This tour takes in some of the same ground as the Small Loop above but runs along the southern shore of Lake Erie instead of northern. It will take you through Detroit, Michigan and Cleveland, Ohio -- either of which could be good starting/ending points. With this loop, you will visit Oberlin, Ohio and the Niagara Falls area (on both sides of the border). These communities offer multiple sites where you might want to take an extra day. To complete this 1,072 mile tour you'll need UGRR Detroit Alternate Sections #1 & #2 and UGRR Sections #4 & #5 maps. The mileage could be reduced with a ferry ride across Lake Erie. 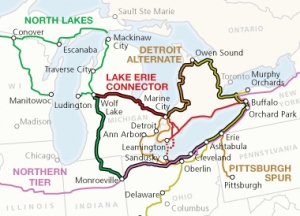 Three (of a Kind) Lakes: In addition to the Underground Railroad theme, this route would also give you bragging rights of having touched three of the five Great Lakes: Erie, Ontario, and Huron. If you're interested in a Bonus roll, you could throw in Lake Michigan for around an extra 100 miles roundtrip. This route also includes a visit to uber cyclist friendly Monroeville, Indiana. To complete this 1,500 mile tour you'll need UGRR Detroit Alt Section #2, UGRR Section #5, Northern Tier Section #9, North Lakes Section #3, Lake Erie Connector maps. 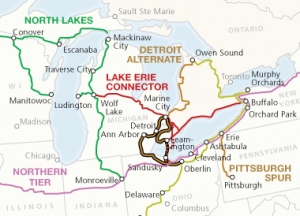 Chance: This tour could easily begin in Detroit, cross the border to Windsor, Ontario, ride south to Leamington or Kingsville, take a ferry to Sandusky, Ohio then ride northward to return to Detroit. The fly in the ointment in this idea, hence the Chance label, is that currently there is no way to ride your bicycle across the border between Detroit and Windsor. In order to do so, you'll have to hire a taxi to take you and your bicycle from one country to the other. Todd Scott, Detroit Greenways Coordinator at the Michigan Trails and Greenway Alliance suggests, "Another option is to use the Transit Windsor bus. They will allow bikes on the bus under some restrictive rules, however, the bus drivers do have some discretion. If the bus is not crowded and the bike can be secured on board, they may take you. If I were doing the route, I would try my darndest to get to Windsor. I just wouldn't want to miss out on their UGRR history." There are plans to add ferry service to this border crossing. When it is implemented, we'll let you know. To complete this 270 mile tour you'll need UGRR Detroit Alternate Sections #1 & #2 maps.

For more tour ideas and information about the Detroit Alternate Route, check out the official press release.

Love this, Mac! Thanks for playing along.