Lock it or Lose it!

We hope it never happens to you, but having your bike and/or gear walk off without you can be a horrible experience and possibly the end of a great trip. One of our most popular items that riders purchase along with maps and panniers is the RavX Combo X Pocket lock.

I recall speaking with a rider who called in to repurchase a lifetime of touring gear. His story was shocking but not unheard of. It was raining hard and he was waiting out the storm under a bridge just off the roadway. His bicycle was leaning up against a post and he was standing just a few yards away with his back turned, watching the storm. With the wind blowing and rain pounding down, he never heard the perpetrator approach.  When he turned around a few minutes later, his bike was gone. He looked up and caught a brief glimpse of his bike disappearing around the bend.  His bike and everything on it — in essence his home — were gone and never recovered.

It can happen that fast even while you’re standing right there.

Another instance I heard of was about a rider having lunch at an outside café. Her bicycle was leaned up against the wall next to her table. As she’s eating her lunch, the thief grabs the handlebars and begins to walk off with it. She jumped up and yelled. Once the perpetrator realized the owner was right there, he dropped the bike and ran. She was able to continue her tour. She was lucky! 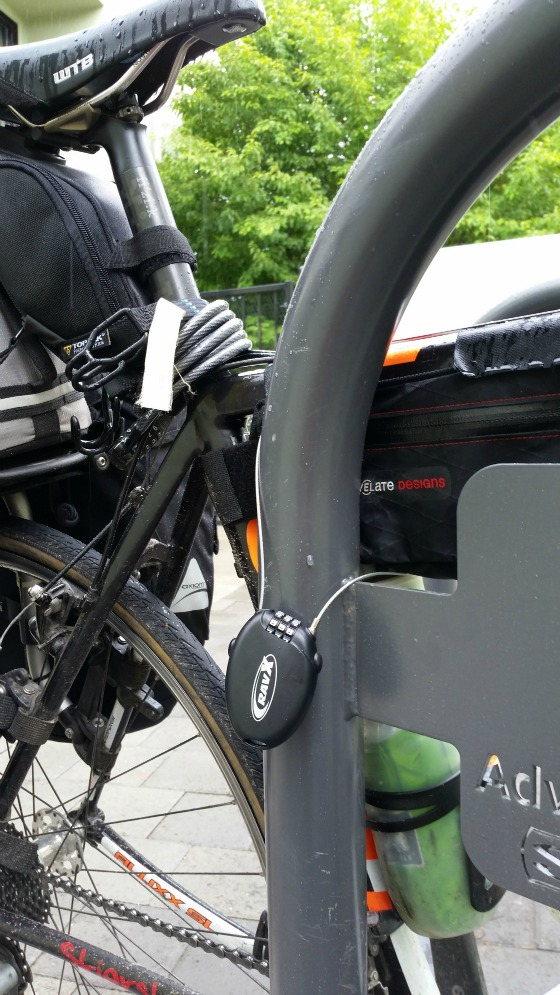 The RavX Combo X Pocket lock is by no means a lock to secure an unattended bike or gear for any extended length of time, but is useful for those short stops. This lock is really ideal for deterring those quick grab and run thefts. Some people use multiple locks, one for the bike and another for securing panniers.

The RavX Combo X Pocket lock is small and lightweight. Coming in at only 2.2 ounces, overall size 2.1” x 3.1”, cable length extended is 29”. The combination can be set easily and is resettable.

Again, plan to use a heavy duty lock when you leave your bike unattended for long periods of time or overnight.

Adventure Cycling Cyclosource carries the RavX Combo X Pocket lock. This handy little lock as well as other gear that you may need can be found in Cyclosource.

Attached links to the lock do not resolve to anything. Has the RAV X lock been discontinued?

I have one of these locks hanging from my bag for leaving my beater around town and doing just as you describe in the article. They are sold as luggage locks at airports. The other option is the good old 'helmet lock' - clip the helmet strap around the back wheel and seat tube.

I usually leave it in the hardest gear so if they try to ride off they gotta pedal really hard. Giving time for me to catch em !!!

For attended stops or quick unattended in quiet areas I lock my brakes (elastic bands that come with my Click Stand) and clip my helmet through my spokes. Hope those two unexpected stops will distract long enough for me to act. I carry a substantial lock for longer or busier stops.

I agree, lock the bike. Classic case is running in the store for just a secound. But, why do you equate loss of bike with ending tour. You get a bike at the first yard sale or discount store and ride on. Any less determination would find some reason to quit anyhow.