Welcome to the first of a four-part series of Interbike roundups. To kick this off, I'll be running down some of my favorite bikes that I spotted on the convention floor. These are all going to be new models for 2014. Here we go. 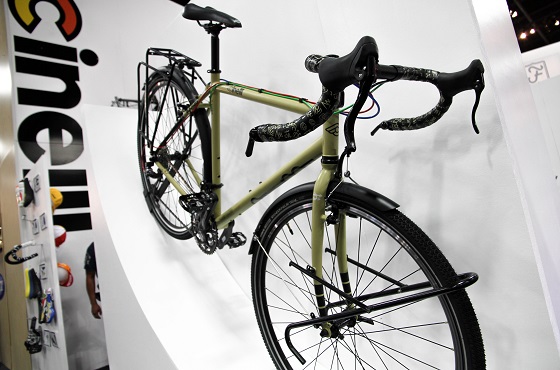 I've been a huge Cinelli fan for a long time, and I'm really excited to see them pushing out a dedicated long-distance touring bike for 2014. This Columbus steel framset will feature a 3x9 Shimano Deore drivetrain with Microshift bar end shifters. Highlights include a set of durable Vittoria Randonneur Trail tires, as well as front and rear Tubus racks. Fenders are also included. Just grab a set of panniers, and this bike is ready to ride across the country out of the box. Retail is looking like $1850. 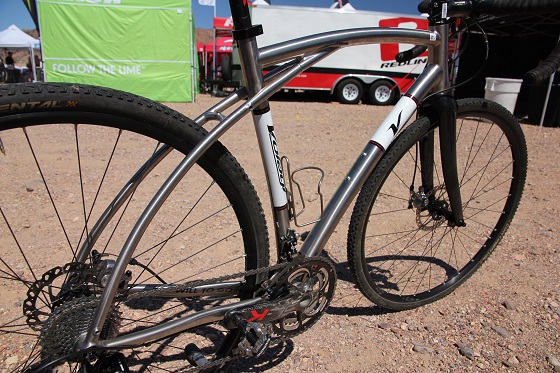 This is a new titanium version of Volagi's current steel Viaje bike. Their Long Bow Flex Stay provides some vibration dampening in back to help smooth out rough gravel roads. It has loads of tire clearance, and can handle 32mm tires with full coverage fenders, or 42mm tires on their own. In back, you have rack braze ons for hauling some gear. An excellent light duty touring bike that can be a lot of fun unloaded as well. This is still in the prototype stages, so we don't have an MSRP price tag quite yet. 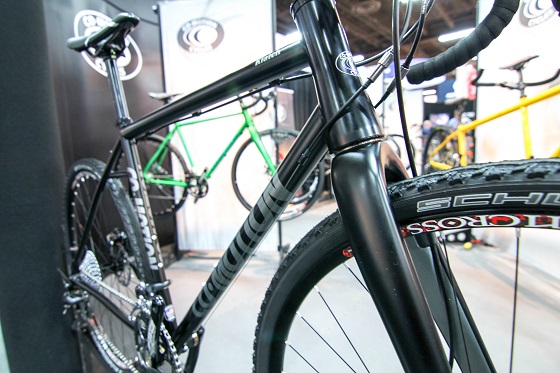 When Co-Motion launches a new bike model, you know it's going to be good. The Klatch is aimed at the gravel grinder crowd, which seems to be getting a lot of attention these days. This style of bike sits somewhere between a cyclocross bike and a touring bike, and with the Klatch sporting a Reynolds 843 frameset complete with three bottle cage mounts and rear rack eyelets, I'm going to call this good to go for some lightly loaded touring. The framset alone retails for $2195, and includes a headset and ENVE CX disc carbon fork. There is a complete build option for $4460 with component highlights that include a Shimano 105 drivetrain, TRP Spyre mechanical disc brakes, and a Stans NoTubes Iron Cross wheelset. The bike is geared as a 2x10, with a 52/34 FSA crankset in front, and 11-32 cassette in back. 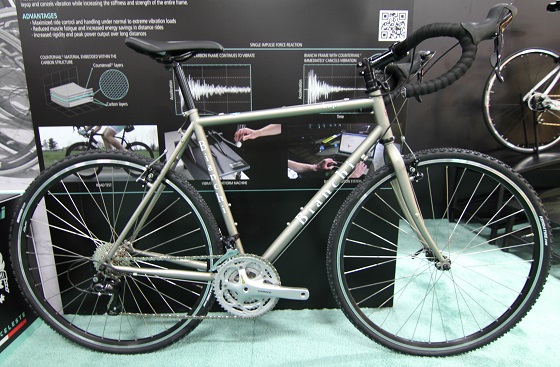 Bianchi's Volpe has been a long standing jack of all trades bike. It's been used for cyclocross, commuting, gravel riding, and long distance touring. Bianchi's new Lupo uses the same steel Volpe frame, but specs it out with a more affordable Shimano Sora 9spd component group. At $1050 this is the perfect gateway drug to whatever type of riding you decide you want to take on. If that style of riding happens to be long distance bicycle touring, the Lupo has eyelets for a full set of racks and fenders. 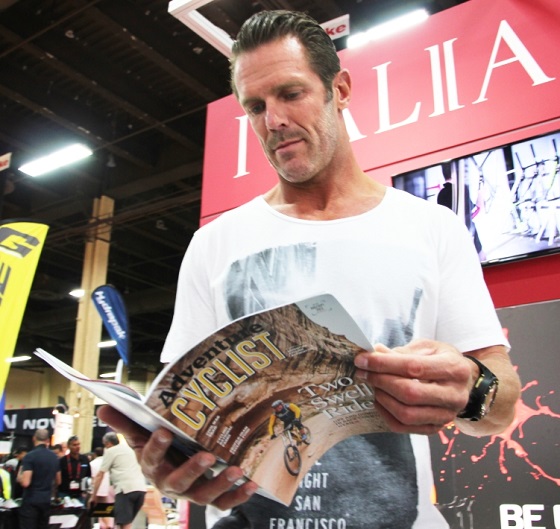 Okay, Mario Cipollini hasn't pushed out any dedicated adventure bikes yet, but we did catch him perusing the latest copy of Adventure Cyclist magazine. Hopefully he's getting some good ideas for a 2015 touring bike with plenty of Italian flair.

That's it?? Only 4 touring bikes previewed?? What about Surly? Anything new from them? And how about new touring bikes with disc brakes and Ti couplers for travel? I will stick with my Surly LHT which I had Bilenky install Ti disconnect couplers 3 years ago to save me $600 r/t on every international flight on Delta. Just wish it had disk brakes on the 700C wheelset.

Fargo 3 is a good one as well.

Was Salsa not there?