Inspiring the Next Generation of Adventure Cyclists 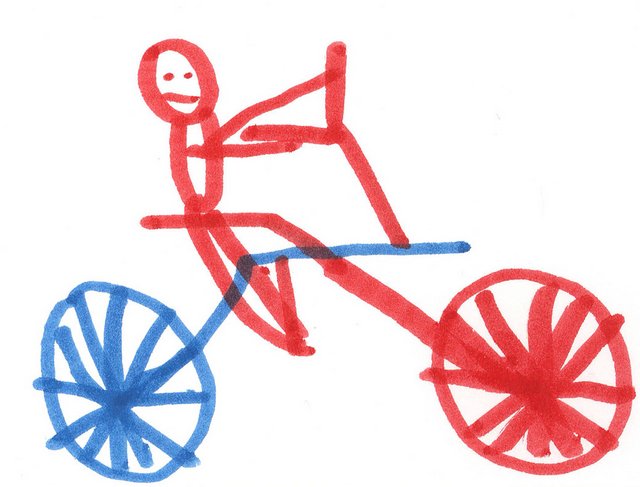 The artist is Zak and he attends a primary school in Washington state where I presented an assembly entitled "The World's Greatest SUV". It introduces kids to the magic and wonders of bicycle travel.

If you haven't ever talked to young students about your bicycle travels ... you should.

You may think your trip across your state or across America pales in comparison to the hundreds of blogs and posts of epic world travelers. But to the students you take the time to visit ... you'll be Columbus, Magellan, Neil Armstrong, and Amelia Earhart all wrapped into one. You'll rock their world.

The following is an excerpt from a column I wrote for Adventure Cyclist magazine in 2000 (pdf):

The question remains, how do today’s students get introduced to the bicycle as a vehicle of travel and discovery? Most are driven to school in SUVs until they reach the age where they can buy their own car. The media is saturated with advertisements about adventure, nearly all of which are connected to sales of automobiles, jet skis, and snowmobiles.

For the generation growing up today, the bicycle is something you put on top of your Ford Explorer until you reach a recreational trail. It is a toy, not a viable means of transportation. Just this past year I revisited my primary school while classes were in session. I walked onto the very same courtyard once saturated with bikes. It contained one lonely bike rack occupied by a total of three bikes.

But kids and students can only get excited about what they’ve been exposed to. One of the most rewarding experiences of my life came, not on a mountain pass in a far away country, but with my relationship with a third grade class in San Francisco.

Before I left for India, I promised Jennifer, a teacher friend of mine, I’d visit her school. I have to admit I wasn’t too excited about the experience. I figured that compared to video games, Power Rangers, and extreme sports, a guy on a bicycle was going to go over about as well as cold oatmeal.

I rode into her classroom with my bicycle fully loaded. To my surprise her students were totally enthralled with my bike, the same type of vehicle most of them already owned. After I talked about my planned journey, dozens of hands shot up when I asked if they had any questions.

Throughout my five-month journey I sent letters to the students. When they received them, they had to locate from where they’d been sent on a giant map of India in their classroom captioned, “Where’s Willie?”

Three months into my journey, I pulled into the city of Indore in central southern India. I had arranged to have mail sent there. There were a couple of letters from family and friends, and one large packet. Enclosed was a bundle of letters … every kid in Jennifer’s class had written to me.

Upon my return to the States I visited Jennifer’s class again. I had to break through a large “Welcome Back” banner held across the doorway. I spent the day with thirty future travelers, answering questions about tigers, mountain passes, and strange foods.

Then it was their turn. They all stood up and sang a song they had written for me and presented me with a gift, a hand-painted t-shirt of a bicycle wheel with the caption “The World for Willie.” The back of the shirt was filled with the pastel colored signatures of the kids. I stood in that classroom, tears rolling down my face, relishing in what has become one of my dearest travel memories.

I hope one day to open up my mailbox and pull out a postcard from a foreign land. I won’t recognize the name, but I’ll smile and laugh and cry. It will begin something like …

Do you remember talking to my class several years ago?”

Will there be a next generation of adventure cyclists? There won’t be, unless those of us with a passion for bicycle travel find ways to share our passion with others.

I recently got into cycling and I am obsessed with it. It's odd that I stumbled across this website as it is very timely and a great read!

This is an excellent article. People wonder why I travel all over the country riding bike trails and sharing my insights on www.trailsnet.com This article says it all.

As a former teacher and current travel writer, I couldn't have said it better myself. Thanks for the great story.