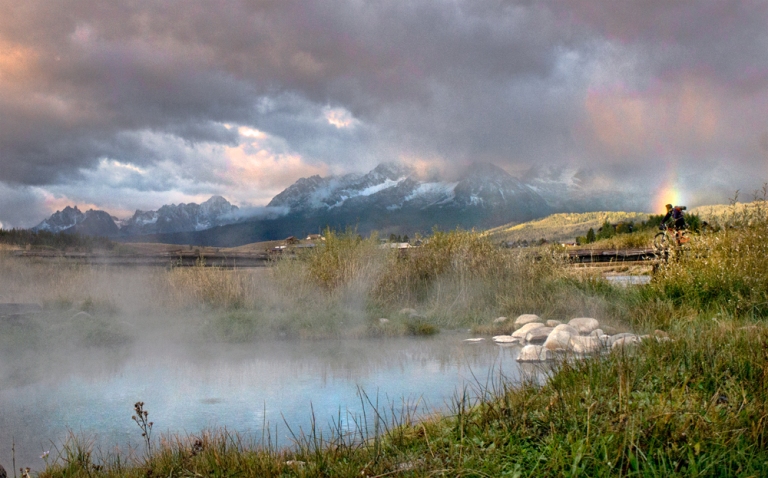 Late September snow in the Sawtooths calls for an early morning soak at Snakepit Hot Springs.

We at Adventure Cycling Association have long felt that bicycle travel and backcountry byways go together like pie and ice cream. After all, it's been nearly two decades since we commenced research on the Great Divide Mountain Bike Route, and we've run off-pavement tours for fat-tire enthusiasts since the 1980s.

But it took the vision of Adventure Cycling cartographer Casey Greene to add a third element to create what just may be the perfect triad: natural hot springs. And the combination of bicycles, wild country, and steaming water is obviously a winner, because the maps for the new Idaho Hot Springs Mountain Bike Route (IHSMBR) have been flying out out door like ... well, like pie and ice cream in a small Iowa diner after the RAGBRAI riders hit town.

Idaho claims the most soakable hot springs of any state in the Union, with roughly 130 of its 340 springs considered soaker-friendly. 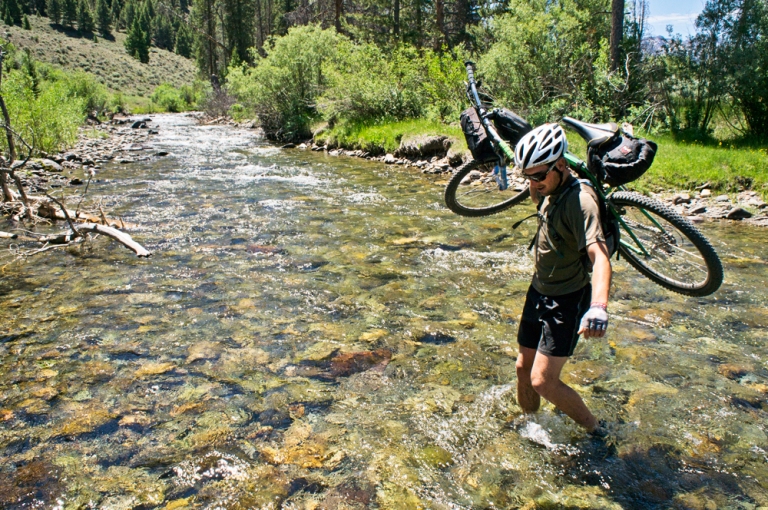 Not all water in central Idaho is hot by any means. Here Mickey Smith gingerly crosses
the East Fork of the Salmon River.

A long record of human recreational and utilitarian use of these hot springs exists in Idaho. Artifacts and petroglyphs found near certain springs reveal that prehistoric Native Americans gathered at them. Hot springs were later used by 19th-century settlers, miners, and trappers. Burgdorf Hot Springs, for example, was frequented by trappers as early as 1862. It was a German immigrant by the name of Frederick Burgdorf who turned an undeveloped hot spring into a commercial one. After a failed attempt at gold mining in nearby Warren, Burgdorf turned instead to the bounty of hot water bubbling forth at a spring about ten miles to the west. He established a resort there in 1870, building a pool and an associated hostelry and cabins. He also raised cattle, selling meat and milk to area miners. (Burgdorf Hot Springs lies along the IHSMBR's Secesh singletrack option, north of the resort community of McCall. You can read about it in this Bike Overnight post.)

Hot springs derive from water percolating through faults and loose rock to points deep within the earth’s crust, where it is heated through association with intrusive hot rocks and/or molten material. As the water heats up, its hydrogen and oxygen molecules become very active, which eventually forces it back upward. Springs develop at the points where hot water emerges at the surface. 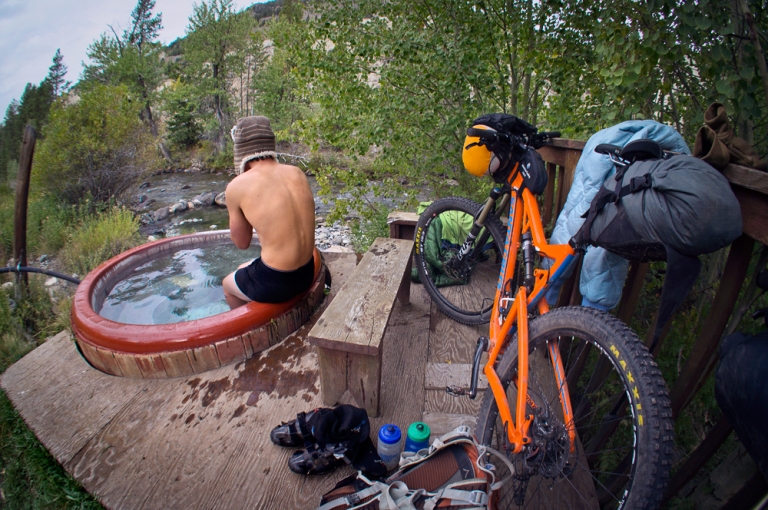 By way of definitions, intrusive rock is that which is forced, as magma, between the cracks or layers of other rocks at depth within the earth’s crust. A batholith is a large body of igneous rock formed by the cooling of a mass of such intruded magma. The Idaho batholith, at 200 miles long and 75 miles wide, extends even into western Montana. Among other ranges, it contains the Sawtooths, Idaho’s Pioneer Mountains, the Salmon River Range, the Clearwater Mountains, and the Bitterroots.

The Idaho batholith also wholly encompasses the IHSMBR, helping to explain the presence of all those delectable pools of luscious hot water. So enjoy!

These maps have been flying out the door at Bike Touring News in Boise as well. Thanks for putting this together!