"I Never Intended to Be Brave, A Woman’s Bicycle Journey Through Southern Africa" — A Great Read!

One of the reasons I love travel narratives is that I feel like I personally know the author by the time I finish his or her book. This time, I met Heather Andersen first as our tour leader on Adventure Cycling’s San Juan Island Inn to Inn Tour in 2013, and read her book, I Never Intended to Be Brave, A Woman’s Bicycle Journey Through Southern Africa, months later.

In her book, I Never Intended to be Brave, she recounts her five months and over 5,000 miles of cycling across Southern Africa in 2003-2004, immediately following her two-year Peace Corps volunteer service in Lesotho, Africa. Her cycling route takes her through the southern countries of Malawi, Zambia, Botswana and Namibia.

As her Peace Corps commitment was coming to a close, Heather felt like she had not had the opportunity to explore Africa and did not want return immediately to the U.S. She had brought a mountain bike with her for casual riding and decided that cycling would be her preferred way to travel. Heather placed ads in cycle touring magazines hoping for a group of four or five interested riders. Eventually, only two travel partners committed, and then one of the riders stopped communicating with her altogether. Heather was then left with just one riding partner, Paul, from Chicago, with whom she had only communicated with via email.

About a month into the tour they are unable to reconcile differences in trip expectations and Heather finds herself having to make a decision on whether to keep going solo or end her dream.

She writes at this juncture, “In a way it would be easy to just go home, back to the U.S., rather than going on alone. It's easy to say, “well, I tried and it didn’t work out," easy to blame Paul for misrepresenting the kind of trip he wanted to do, easy to choose the illusion of safety in quitting rather than the uncertainties of solo travel …”  Heather does not step down. She decides to continue her Africa dream trip, alone. 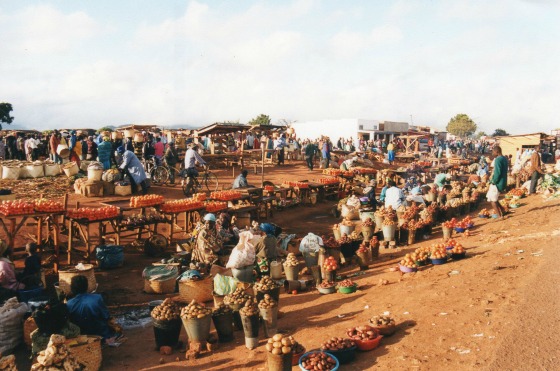 What struck me as courageous was Heather’s decision to go forward on her own, in that moment of vulnerability.  Not only as a solo cyclist traveling across the African terrain with limited resources, but also cycling in a land with  possible dangers. Not only the unwanted attention she might get cycling as a woman, solo, but also as a white Caucasian. She describes how being fair-skinned could almost bring celebrity status to you in more remote areas. Instead of the anonymity most feel with touring, you are noticed and presumably you have money and sweets to be shared.

Heather gives us a gem-like snapshot of modern day Africa—both beautiful and flawed. Just like any country, there was welcomed hospitality at times, as well as unwanted offers of hospitality. Heather describes these moments with diplomacy and humor. One great quip is when she was advised in the previous town to camp at the police station in the next town. When she arrives the police will not allow her to camp on the lawn.

“We can’t let you camp here because we don’t really know who you are,” the officer tells her. The dialog continues with Heather asking about lodging alternatives but it’s late in the day and there are no other options.  The man continues, "the captain said there’s no way we can let anyone camp here. The only way you can stay is if we put you in a cell.” Spending the night in a South African jail cell would put me in the company of Nelson Mandela, perhaps not such a bad place to be.”

You will have to read her book to find out the rest of that story as well as other unpredictable encounters Heather dealt with daily. I Never Intended to be Brave is a fun, fascinating, and adventurous read for anyone interested in bike touring or just getting to know Southern Africa on a day-to-day level. 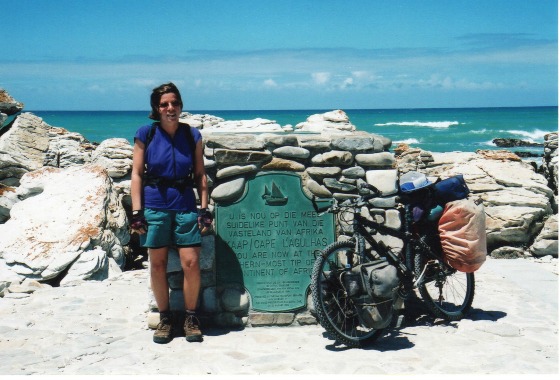 On one of our San Juan tour evenings, Heather offered to do a book reading. She had one extra copy to sell, and another couple and I both wanted it. Since I live in Missoula and could easily pick up another copy from Adventure Cycling Association’s Cyclosource, I missed out on the signed copy.

Heather, please let me know when you and your bike roll through Missoula and you can stay with us. You can pitch your tent or take a bed, enjoy a warm shower and home-cooked meals, all in exchange for signing my book!  — Bridget McMillion

I Never Intended to Be Brave, A Woman’s Bicycle Journey Through Southern Africa, by Heather Andersen, can be purchased through Adventure Cycling Association’s online Cyclosource store.