How To Quit Smoking 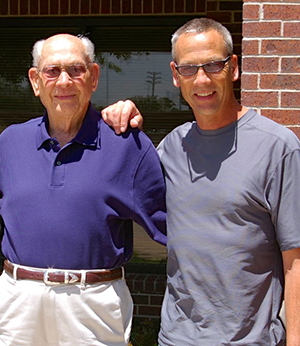 1984. San Diego, CA. I had been riding my bike to San Diego State University for school and work, piling up 200 miles per week. I was into it. I read Bicycling Magazine, owned a copy of the classic Glenn’s Complete Bicycle Manual, and ultra-cylists and Race Across AMerica veterans, like Lon Haldeman and Pete Penseyres, were my cycling heroes.

Then, I sprung the idea on my parents. I was talking with my dad on the phone, my mom and dad lived in Philadelphia, PA, and I said, “Hey, I’m going to ride my bike across the U.S. this summer.”

I said, “Dad, people ride across every summer.” And in fact, I had already used the Bikecentennial ’76 map booklet to ride from San Francisco to my home in San Diego.

Me, “Tell you what Dad, if I ride all the way across, you have to quit smoking.” He thought it was a sucker bet.

I left my apartment with about $425 cash, all I had, and six weeks to make the east coast. In retrospect, I WAS crazy. After finals, I headed east on June 1 and it was very hot in the Imperial Valley, duh. So, logically I thought, I rode in the middle of the night to make Yuma, AZ.

Naiveté goes a long way on a bike tour when you’re young and I got lucky with a strong, cool tailwind all the way to Quartzite, AZ. The ride was easy from there, averaging about 100 miles per day. I had one very high mileage day from Conchas Lake in New Mexico, all the way to Guymon, OK, about 200 miles away. A city maintenance worker let me sleep in the park in Guymon, the sprinklers came on at 4:00am.

When I rolled into Norfolk, VA after five weeks on the bike and camping the whole time, I had $20 in my pocket. I shoved a quarter in a pay phone and called Dad to pick me up because $20 wasn’t going to feed me to reach Philly. I bought a pizza, one beer, a hamburger, and fell asleep on a bench right on the boardwalk at the beach.

Dad smoked his last cigarette on the his down from Philly to pick me up. Many times over the years he thanked me for adding years to his life. 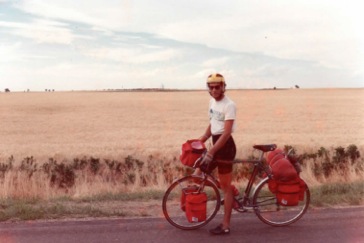 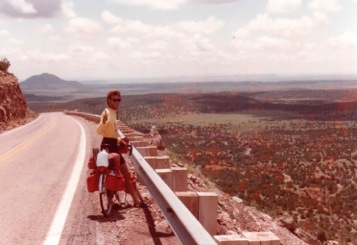 This is a great love and adventure story. Thank you. It brings tears to my eyes.