How To Find The Perfect Touring Bicycle 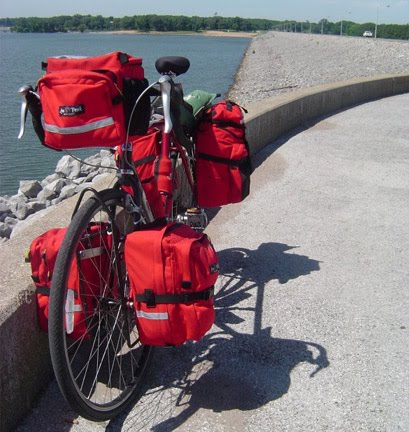 I get emails all the time from people who ask:

“I'm planning to go on a bicycle tour sometime soon. What kind of touring bicycle should I get?”

The problem is, there is NO SUCH THING as the PERFECT touring bicycle.

Pick the right bicycle for your trip and you’ll be sure to come home with those wonderful bicycle touring memories you’ve been dreaming about. But pick the wrong touring bicycle and your trip could be over before it’s even had a chance to begin.

So, if you're planning a bicycle tour any time soon and you're looking for YOUR perfect touring bike, here are some questions you need to ask yourself before you begin shopping around.

The location of your tour also affects what kind of brakes you'll use, which type of frame material is best, and a whole host of other factors.

The location of your bike tour very much determines which type of bicycle you should ultimately be riding.

2. How much gear do you plan to carry?

The second thing you need to consider is just how much gear you plan to carry, as the weight of your load determines the ruggedness of the touring bicycle you need to purchase.

If, for example, you plan to carry a lot of gear (i.e. tent, sleeping bag, sleeping mat, etc), you're going to want a more rugged frame than if you plan to stay in hotels each night and travel with nothing but a change of clothes and a credit card to buy food and drinks along the way.

Next, consider your budget. Touring bicycles range in price from around $850 to several thousand dollars. For some top-of-the-line touring bicycles, you can easily spend more money than you would if you were to purchase a motorcycle or even a used car.

The reason behind the price differences in various touring bike models is an article for another day, but when picking out a touring bicycle, your budget is going to play a large part in determining which models are ultimately available to you.

4. Will you use your bicycle on other tours in the future?

Finally, when you go about purchasing a touring bicycle, think about whether or not you plan to use that bicycle in the future. Many people purchase a brand new touring bike, use it for a short tour near their home, and then never use the bike again. Do you really need a special touring bicycle just for that? Probably not!

When purchasing a touring bicycle, consider the fact that 1) you can use the bike for multiple tours and 2) you can always use your touring bike as your commuter or around-town bicycle once your get back home from your first adventure. Consider your touring bicycle an investment, not a necessary expense for completing just a single trip by bike.

There are many other factors to consider when picking out your first touring bicycle, but these four items should help you get started.