Here to There (and Everywhere in Between): Going West on the TransAmerica Trail 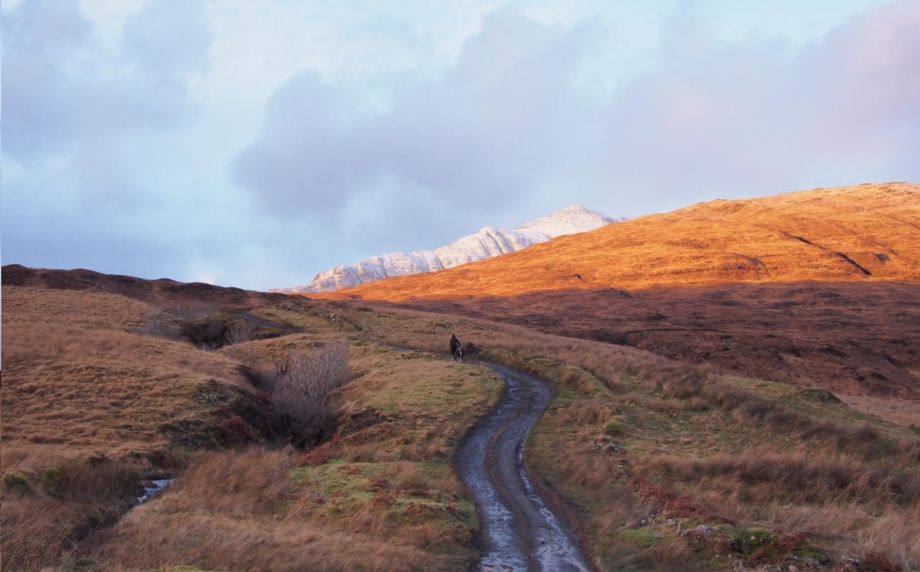 My Warmshowers hosts were kind enough to have turned on the heat and left a key under the doormat. They were tree farmers and winter was peak planting season in the Scottish highlands, so they wouldn't be home till late. Considering the back-to-back days of riding into the wind and rain—not to mention waking up in a pool of standing water that morning—I was elated just to be inside. After peeling off a few sopping layers of wool, I put the kettle on and checked my email for the first time in a few days. I scrolled through my inbox and the saw subject line: TransAm2015.

My head went flush and my stomach dropped out as I read on, “Are you available to co-lead a TransAmerica tour with the Adventure Cycling this summer?" Yes and without hesitation.

I was already five months deep into a nine-month bicycle tour and research fellowship in Europe when I signed my contract—another three months on the road couldn’t hurt. The thought of coming back to The States to lead a tour across one of America's most historic bicycle routes was a dream. A visiting friend was kind enough to hand deliver my TransAm map set during a stopover in Budapest and I began reviewing materials for the tour immediately.

As I read through the field notes and looked over the maps I started thinking a lot about the similarities between the USBRS and the Eurovelo system, most notably their use of historic byways. Many, if not all, of the Eurovelo routes are based on old pilgrimage and trade routes, like the Eurovelo 3, aptly titled The Pilgrims Route, which begins north of Jutland and follows an old cattle track into Hamburg before meeting up with the traditional start point for the Camino de Santiago de Compostela, just west of the French Pyrenees. For hundreds of years these paths had been trod by native populations, pilgrims, and traders. A deer track turns into a hunting path, then a trail, then a road and over time these desire lines developed into the framework of paths we cycle on today.

In looking over the TransAmerica route, I noticed similar adaptations. Over its 4200 mile traverse, the TransAm not only crosses though many historical sites and national parks it follows the chronology of our country's complicated settlement and westward migration. Our east to west trajectory for the summer linked together, and intersected with, some of the most storied landscapes in our nation's history including the Trail of Tears, Nez Perce (Nee-Me-Poo) National Historic Trail, Sante Fe Trail, The Morman Pioneer Historic Trail, Lewis and Clark, and last but not least the only trail to be imoratilized in 8-bit video game glory - The Oregon Trail. The histories of these trails are rich and deep and I looked forward to learning more about these narrative landscapes as we cycled through them.

I boarded a plane from Chopin International to JFK. From New York it would be less than a week's ride to historic Williamsburg where I'd meet up with my group for a shakedown ride to the official start location of the TransAmerica Trail in Yorktown, Virginia. There, we ritually dipped our tires into the Atlantic and began the thirteen week process of getting to know one another. Over lunch at a local parish, we were invited to go around and share the story of how we came to be here in this space and how we had, individually, come to the shared conclusion that it was good idea to bike over four thousand miles across the country with a group of strangers. The answers were as varied as the personalities in the room and by the time we got around the circle, I was grinning wildly through my tears. It wasn’t a full-on ugly cry, that would come later, it was pure joy and excitement for the journey ahead. Although I was to be leading the tour, I was humbled to recognize the multi-centered leadership already surfacing from within our group and felt lucky to be sharing this experience with such remarkable people.

We departed Williamsburg in high spirits, cycling through the dense green of late spring knowing all too well that we would soon encounter the inevitable trials and tribulations of the touring cyclists' monomyth—headwinds, rainstorms, punctures, aggressive dogs, saddle sores, and the occasional unsavory pit toilet. There was even a moment in Kansas where I was convinced we had slid into the Zombie apocalypse. Though I'm told they call it the Race Across America, I'm still not convinced that it is a human act to ride a bicycle across the United States in under twelve days.

Not unlike the hero's journey, my experience on the TransAm started off great, went bad, got worse and redeemed itself. Over and over again. Sometimes it took several days and other times only seconds, but hard times shifted into soft focus in that landscape and faded away completely in good company. I've heard folks talk about their experience with bicycle travel, “it's not the places, it's the people you meet,” and while I don't disagree I can't help but insist that it is the place, or the path, that helps shape that meeting.

We hop-scotched with several groups and individuals all along the trail, some for several days at a time and others for weeks on end. These people became like family to me on the road. You can learn a lot about yourself and your comrades while hiding out and sharing sandwiches under a tree during a rainstorm, as was the case with Hurricane Bob in Missouri. Or gallantly fighting off dogs in Kentucky. Or when camping out in a church basement to escape a militant cloud of mosquitoes in Jeffrey City—though the mosquitoes were the least memorable part of that remote Wyoming town.

The uranium mine in Jeffrey City was shut down in 1982. Shortly after, it nearly became a ghost town, losing over 95% of its inhabitants within three years of the mine's closure. I got in some post-ride bonus miles trying to find the old mine site. Remnants of it still stand looming over the town, a scar along a mountain at the end of a long dirt track clearly visible from the little white church where we were invited to make camp. Jeffrey City was originally named "Home on the Range, Wyoming " and is now home to an estimated population of forty-one, according to one of our gracious hosts. It was not uncommon to come across a town like Jeffrey City along the TransAm. Since the route is strategically designed to avoid major roads and cities, riders often find themselves on side roads and in small towns that have undergone significant changes since the 1976 Bikecentennial.

Spending day after day in the saddle, we came across a variety of sights from the pastoral and picturesque to the sub-urban and industrial. Not every moment was a bike in the park and managing expectations is always difficult. Sure, we marveled at the Tetons and the Grand Prismatic Spring. Caught our breath atop Hoosier Pass. Cycled the skyline of the Blue Ridge and high-fived thru hikers on the Appalachian and the Pacific Crest Trails. These were obvious highlights and while I gawked at them in slack jawed awe I found myself equally, and oddly, captivated by the unexpected landscapes as well. The epic climb up a pass that suddenly reveals a power plant or section of clear-cut. The dam at the far end of what you thought was a natural lake. The endless miles of barbed wire and commercial agriculture. The not-so-subtle impact of progress on the landscape.

Over the course of the tour I began to see the TransAm as a contemporary pilgrimage of sorts. A transient effigy and celebration of manifest destiny—a reenactment of exhaustion and exuberance stretching from sea to shining sea. 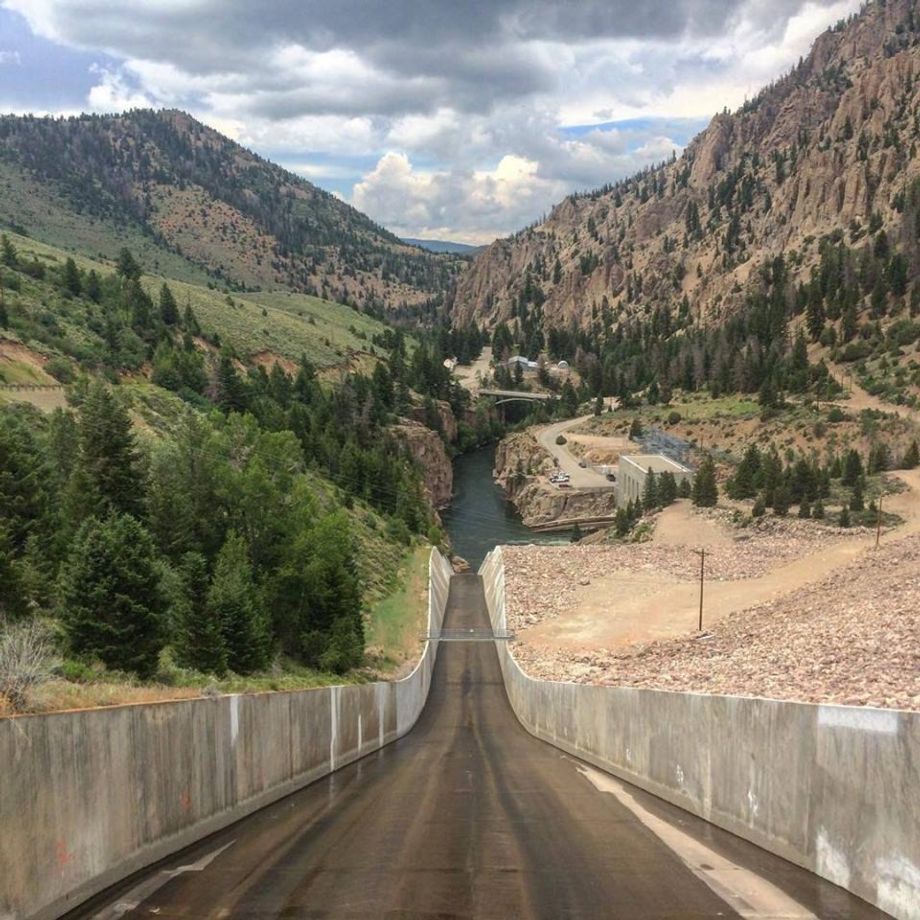 Diclaimer: I was reading a lot of books by Lucy Lippard and Rebecca Solnit during this trip.

Tryptic 3, Image 1:Celia & Leia - our Road Family, Leah Crosby
All other images: Whitney Ford-Terry
For more photos from this trip (and other adventures) you can visit @whitneyft on Instagram
__

Always pleasant to recall the trip through the eyes of another. Thanks.

It's almost literature from Whitney. Despite the realistic description of the cyclist's 'monomyth', one must be very strong to resist the temptation to ride the TransAmerica Trail..

what a delightful blog to read...Whitney is well-storied and her writing is insightful and a joy to read. The photos were wonderful as well.