I am really excited to introduce a new component of the Build It. Bike It. Be a Part of It. campaign for 2013: Club Week.

For the rest of this week, clubs throughout the country have sponsored match challenges to raise money for the U.S. Bicycle Route System and raise awareness of the project to their members and supporters. As of Friday morning, USBRS supporters have donated $81,770 towards the $100,000 campaign goal.

Our first club sponsor is one of the largest bicycle clubs in the U.S.: Cascade Bicycle Club! Cascade is presenting us with a two-day, $1,000 match, so please donate today to help us meet the challenge!

Cascade Bicycle Club boasts more than 15,000 members from the Puget Sound bicycling community. Their mission is to create a better community through bicycling. They host numerous rides, activities, and events in the community including the Cascade Presentation Series, which covers a wide range of topics of interest to members and the general cycling community. Cascade volunteers lead over 1,000 free daily club rides — at least one ride virtually every day of the year. The club also leads multiple day tours and Cascade Affiliated International Tours. Cascade is active locally in advocacy and education to improve the facilities and safety of all cyclists. Cascade produces several major event rides during the year. The most famous is their double-century ride, the Group Health SEATTLE TO PORTLAND (STP) BICYCLE CLASSIC.

Cascade Bicycle Club envisions a community that bicycles — an inclusive, diverse and accepting community where people of all ages and backgrounds bicycle to work, to get around, for fun and for health, and where bicycling brings people and neighborhoods together. Bicycling will be convenient, cyclists will be connected by world-class bicycling infrastructure, and cycling will be widely recognized and appreciated as an important contributor to a prosperous and livable community.

Tonight Cascade Bicycle Club is very proud to present an evening with TWO of the true legends in the history of cycling; Phil Liggett, MBE, and Paul Sherwen. Phil is universally referred to simply as "The Voice of Cycling." For those of us who watch cycling regularly, he is indeed considered royalty; someone who is totally revered and whose voice transcends the sport itself. His broadcast partner for many of these years, Paul Sherwen will be joining Phil onstage for one glorious evening you'll not want to miss!

Adventure Cycling is very grateful to have the support of Cascade Bicycle Club and its members. I hope you'll help us meet their match challenge by donating today. And remember, your donation enters you into the sweepstakes to win a SERFTAS bike case from BikeFlights!* 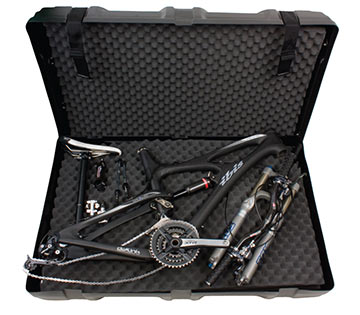 *No purchase necessary. See sweepstakes details on the sidebar of the campaign page.