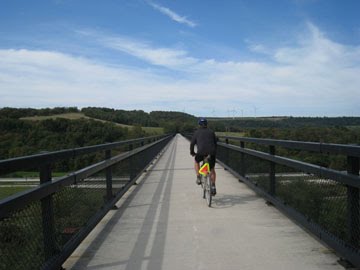 Adventure Cycling member Bob Youker of Bethesda, Maryland, is a former World Bank employee and current cheerleader of all things rail-trail. He emails me on a fairly regular basis, telling me about trails he's recently ridden and urging me to promote them. I guess his efforts work, because here I go ...

Bob says it would difficult to narrow it down to a quartet of his favorites — he's ridden some 80 rail-trails — but that if pressed, these would be the four:

As for me, of those I've ridden my fab four would include the Great Allegheny Passage (Maryland-Pennsylvania), the Route of the Hiawatha (Montana-Idaho), the Raccoon River Valley Trail (Iowa), and the George S. Mickelson Trail (South Dakota).

What about you? Do you have a favorite rail-trail you'd like to share with me and your fellow readers?

Photo on the Great Allegheny Passage by Michael McCoy