Gone in a Flash--Tour de Spain 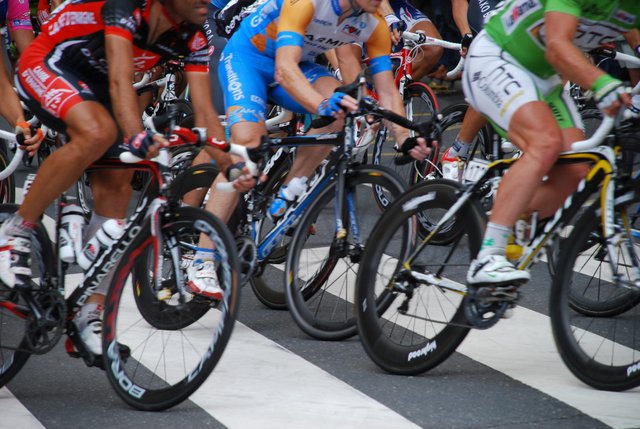 Thirty seconds max. That's all it took from the time we saw the peloton approaching till the time it had whizzed by.

We found a room in a hostal in Salamanca, Spain. After we hauled our bikes and gear upstairs, the woman behind the checkout desk excitedly explained to us that a bike race was coming through town ... in 90 minutes.

Further discussion in broken Spanish led us to discover that we had happened upon this insanely gorgeous city on the same day that a stage of the Tour de Spain was passing though, just five blocks away.

We gathered with a thousand spectators. The police were busy closing down and diverting traffic while also trying to keep the eager onlookers from pushing beyond the yellow tape. Fans gathered with signs, kids squirmed their way to the front of the line, photographers trampled flowers surrounding a fountain.

Everyone one waited with anticipation. The police barked at locals who tried crossing the street that was closed off. A series of civil guard and police vehicles came screaming past. Then more motorcycles and some team vehicles. All eyes searched for a glimpse of the first bicycle.

The leaders, a small pack of six or seven riders, became visible and the crowd lurched forward. There was barely time for me to raise my camera ... and they were gone, taking the corner faster than I'd imagined was possible.

Then 90 seconds later a large mass of muscles and bicycles appeared. The peloton. What an experience. Like watching a swarm of bees go by.

As a touring cyclist who has never raced, never even considered racing, I was in awe of the grace and speed. From someone who is traveling on a loaded touring bike whose weight tops 100 pounds--it was the lumbering elephant watching the gazelles.

Mark Cavendish won the stage. As travelers, we felt like we'd won the lottery.