Glacier National Park has been on my list of places to ride for about as far back as I can remember. When I was given the opportunity to take on the role of co-leader for Adventure Cycling’s Glacier Waterton Loop self-contained tour, I was ecstatic. I knew that Going to the Sun Road was going to be spectacular (after having ridden and driven it in the past), but what I did not anticipate was the gorgeous scenery we’d encounter on other parts of the tour.

Our group assembled in Whitefish, MT on the evening of day one for our introductory meeting and dinner. The group consisted of several longtime Adventure Cycling members (including a couple life members), as well a few newer members. Several were veterans of numerous self-contained tours while others were brand new to touring without vehicle support. Regardless of experience, everyone was eager and excited to hit the road and begin our adventure together. 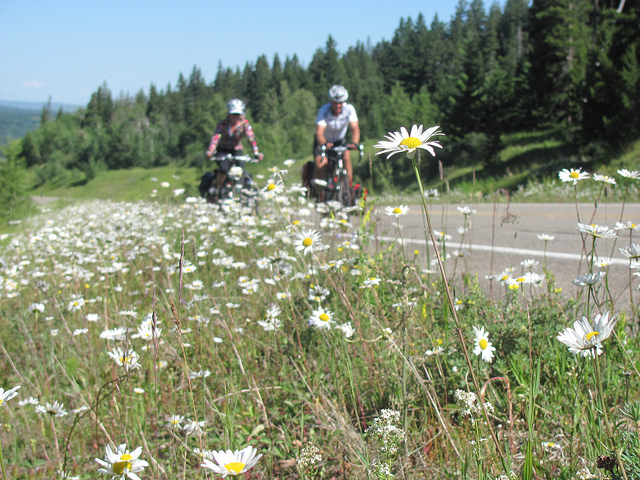 In the days that followed, we made our way to the U.S./Canadian border, said goodbye to Montana, and headed north to Fernie. In Fernie, a hostel stay treated us with nice beds, showers, and other amenities touring cyclists don’t take for granted. Leaving Fernie, our group traveled through Sparwood (home to the world’s largest truck – good thing we didn’t encounter that thing on the road!), then up Crowsnest Pass and through the communities of Blairmore and Pincher Creek. After a brief ride through the windy plains of Alberta, we dropped south to the majestic Waterton Lakes National Park, where a layover day was spent exploring the park. Some members of the group took a boat ride shuttle and all-day hike to Crypt Lake, others opted to hang out in town and relax. 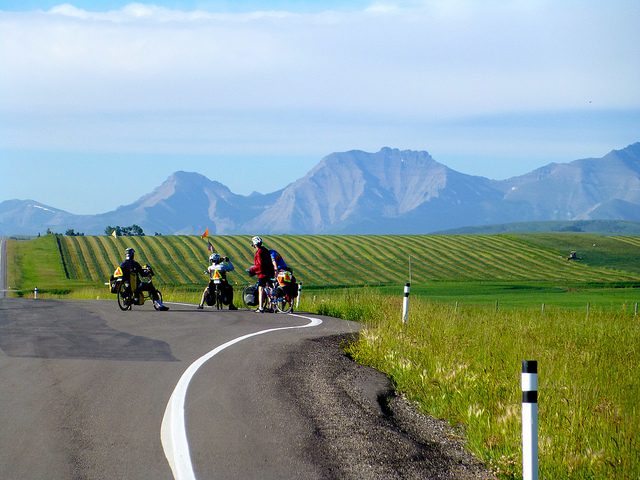 Leaving Waterton, we climbed to the US border, ascended Chief Mountain before a nice descent to St. Mary, where a night was spent resting up before tackling the iconic Going to the Sun Road. During the summer months (June 15 – Labor Day), the park has some specific restrictions for cyclists riding the road. From 11am to 4pm each day, cyclists are prohibited from riding on the stretch of road from Sprague Creek to Apgar Turnoff (essentially the length of Lake McDonald). Because this area was at the end of our day’s route, we were in no hurry to descend Logan Pass, so we spent a good amount of time exploring the sights on the pass and on the way down to Lake McDonald. 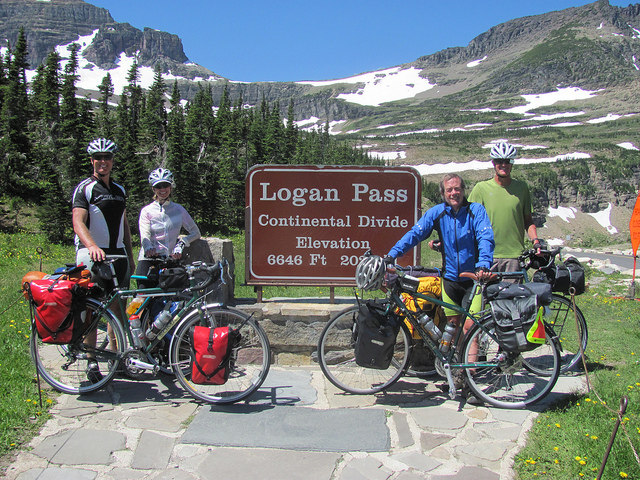 Though we took turns cooking meals for the group, no riding day was complete without mandatory stops for second breakfast, coffee, pastries, ice cream, pie and/or milkshakes at little cafés and coffee shops encountered along the way. The 3 & 93 Dairy Bar in Elko (chocolate milkshakes and burgers), Pearl’s Café in Waterton (massive, bacon cinnamon rolls) and Twin Butte Country Store & Cantina (excellent eggs and chorizo) were just some of our favorites. 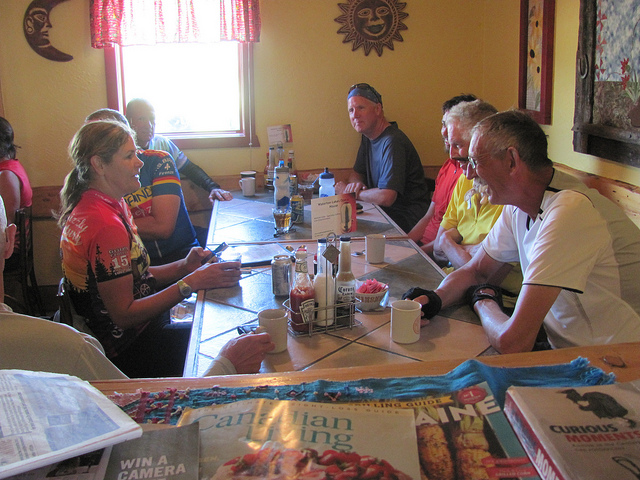 Along the way, we also encountered many other traveling cyclists, some of whom were riding on Adventure Cycling’s Great Parks North, Great Divide, and Northern Tier routes which intersected our route along the way. This gave us an opportunity to hear their stories, check out their touring gear and rigs, and for me, to meet with other cyclists who are using our maps and resources for their own cycling adventures.

This was an excellent tour filled with amazing sights and scenery. We had a great group of riders with whom to share the experience. I would recommend this trip to anyone looking for a challenging and fun self-contained bicycle tour.

Photos by Paul Osika and Ray Foss on Flickr

ON THE ROAD is written by the tours team — Paul, Madeline, and Arlen — tours specialists and intrepid bicyclists, covering all things related to Adventure Cycling's tours department. Check out our 2013 Tours!