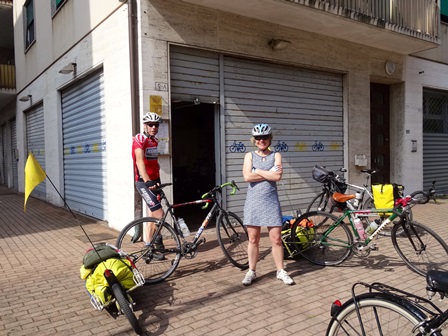 This is a series of posts by Ginny Sullivan, director of Travel Initiatives, highlighting the lessons learned from a month-long bicycle trip in Europe. Ginny, her husband Tom, and friend Neal, cycled on several different bicycle tourism routes and the journey took them through nine countries. A previous blog post provided the high points of the tour, however, nothing could have prepared them for the reality of touring through some of the most beautiful places on earth while witnessing the institutional support and high visitation on the routes. These trip reports focus on 1) big lessons learned; 2) infrastructure and wayfinding; 3) multi-modal connections; 4) tourism promotion and the role of the hospitality Industry. 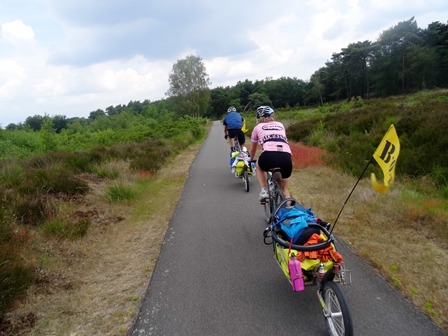 During the month of June, I had the AWESOME opportunity to travel through Europe by bicycle. Lucky me. 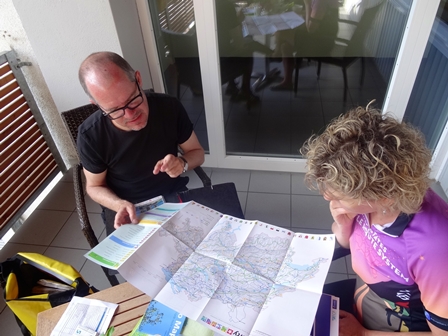 But honestly, this was work and I took notes, lots of notes. I had meetings set up with numerous people along the way. My trip from Venice, Italy, to Amsterdam, Netherlands, took me through Italy, Switzerland, Austria, Lichtenstein, Germany, France, Luxemburg, Belgium, and the Netherlands, and I met with half a dozen people either directly involved in developing or promoting the routes (coordinators and tourism officials) to those reaping the benefits (the hospitality industry). 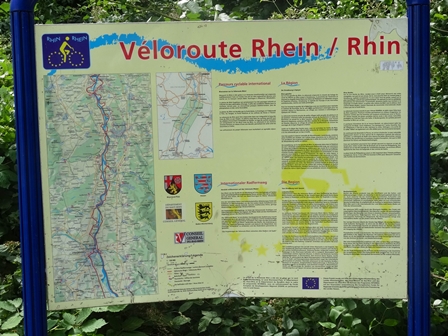 Let me back up and clarify why I did this tour. With the growing interest in bicycle tourism in the U.S., I decided I needed to see what a real tourism network looked like so I could bring those lessons home to North America. Through connections Jim Sayer made during one of his trips to Europe, introductions were made with Ed Lancaster of the European Cyclists Federation. After a few Skype sessions, it became clear that I needed to do at least part of EuroVelo 15, along the Rhine River. I also determined that I wanted to see other kinds of regional and local tourism routes that would offer a contrast to the way EuroVelo and the USBRS are developing.

Today, I’m going to focus on an overview of the trip, what the routes were like and the big moments that made me sit back and say, “Wow! Can we do that?” In some cases, we already are. 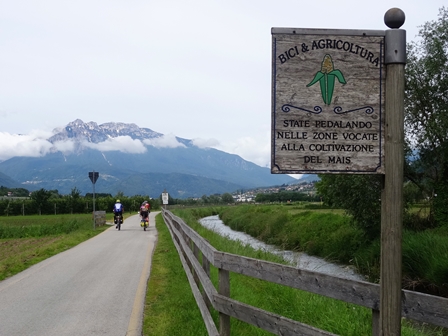 Separated bike lanes and multi-use paths are very important to growing bicycling and tourism. That said, we also rode on plenty of farm roads (particularly lovely in Italy and Switzerland, where the routes are combined with an agri-tourism theme), small village streets, and even a few busy highways. 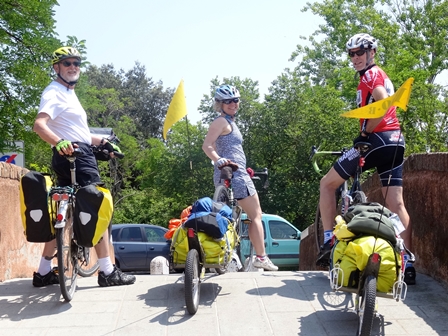 Italians are undisciplined in all things traffic related, which makes touring there a grand adventure. It is also probably the most like the U.S. of all the countries we traveled. Very little is signed for cycling and trails are not necessarily connected. Luckily we had a guide from Federazioni Italiana Amici della Bicicletta (FIAB), a non-profit bicycle advocacy organization and coordination center for EuroVelo. Voker Schmidt (pictured on the far left and yes, he’s German) used his Garmin to navigate from our starting point on the Lido Islands to the Italian Alp city of Trento. This was both tormenting (it stopped working periodically) and comforting. We never would have found the trails and farm roads on our own and we certainly wouldn’t have been able to piece it together so seamlessly. 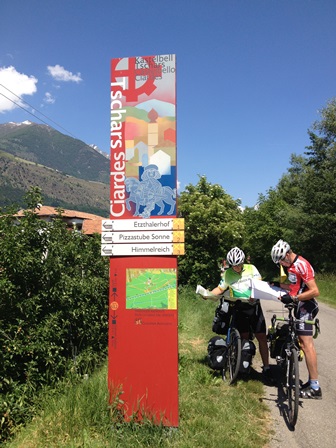 Map data in Europe is not public information. This is what makes mapping bicycle routes such a challenge for developing or poorer European countries. Unlike the United States Geological Survey (USGS), Europe’s maps are a hodge-podge with various levels of accuracy and details. That’s why Open Street Map and Open Cycle Map, an open source data mapping project, is so important there. 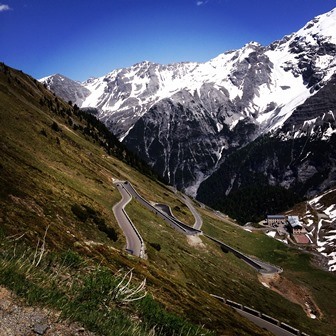 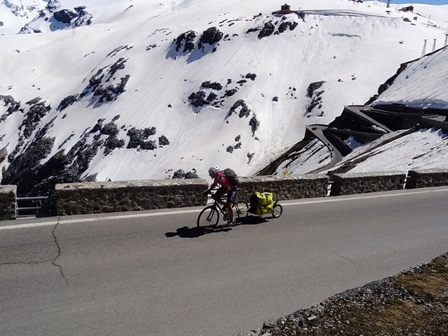 The Alps are really, really high. Going over them on a fully loaded bike is really, really hard. Thankfully, I had a trusty sherpa with me to haul my bag part of the way up. 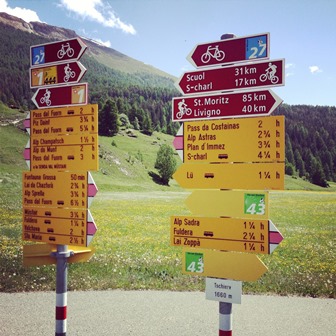 The Swiss know best. It’s true. They have route development, mapping, signing, branding, tourism, and multi-modal connections down pat. It’s awe inspiring (and might I say expensive to travel there). The Swiss network is the ultimate gold standard in people-powered mobility. I had four brief but galvanizing hours with Lukas Stadtherr from the SwissMoblity Foundaion, learning about their vision, their methods, and their 30 year goals. Take aways: dream big but remain flexible, make things easy for the user, location and communication are critical, be passionate, and follow through. 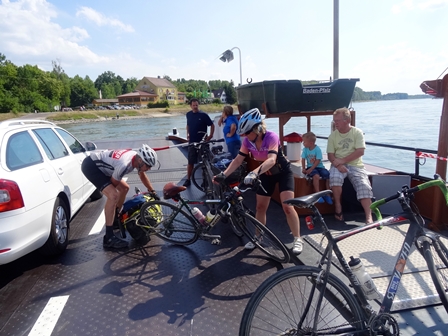 Hello! Do not bicycle tour in Europe with a trailer. Go with panniers for mobility and functionality. Think bike parking in narrow European village streets and navigating on and off trains and ferries. Brutal. That said, our BOB did save the day when there was an attempted bike theft at a train station. 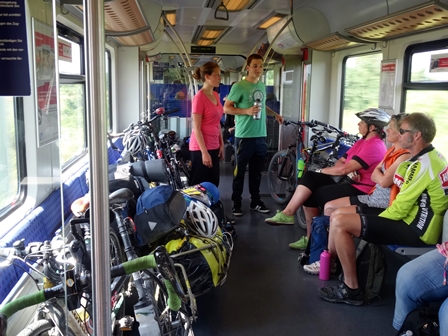 Trains and bikes go together like Nutella and croissants. Someday I’d like to say we have PBJ travel here in the U.S. I’ve got lots of stories to tell the Amtrak Bicycle Task Force about deciding to just make it work (thankfully, we are on our way to making that happen). 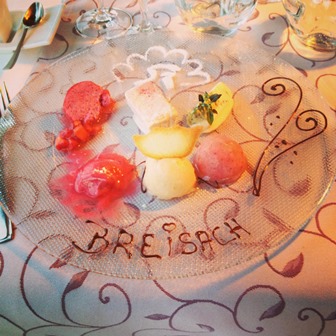 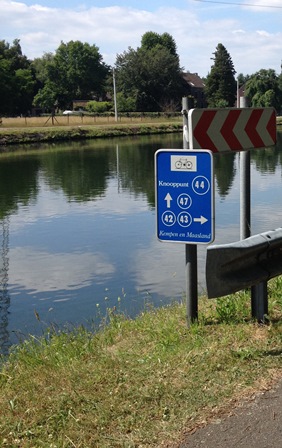 Belgium and the Netherlands have a strange bike route numbering system, but it works. Follow the numbers on your printed itinerary and get to whereever it is you wish to tour. Easy and fun. I admit, we didn’t understand it very well at first. The Tourism office handed us what looked like a printout of a Google map itinerary, but with bike route numbers that seemed to follow no set order. The strange itinerary took us from Belgium all the way to the center of the Netherlands. It’s a great system, but you might also want to bring a map (just in case). We ended up losing our route which caused a great deal of anxiety when trying to be on time for an important next meeting. 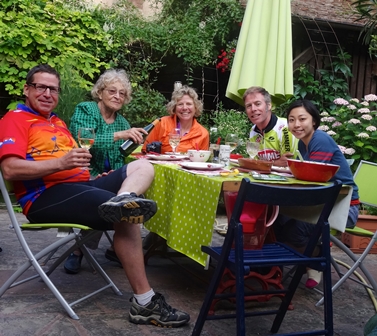 People are nice everywhere. Even and especially France. Noelle (pouring wine) hosted us in her centuries-old home, with a witches tower looming above us and a garden hidden behind the 14th century rampart wall. We enjoyed conversation and companionship in every country we visited. 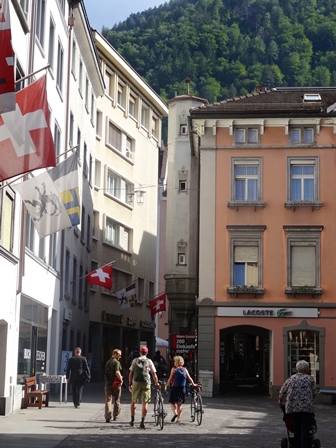 The center of almost every village and city we passed through was a car-free zone. You were allowed to bicycle and usually crowds and scenery forced you to a pace that allowed for gawking. In Chur, Switzerland (pictured here) they are planning to expand the car-free zone to encorporate the train station. 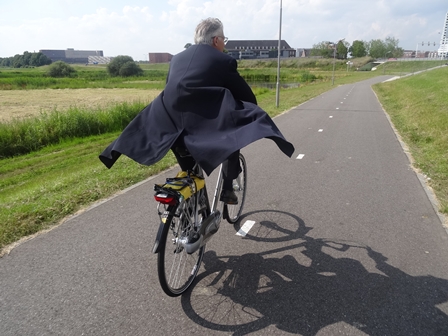 E-bikes are not a nemesis. They provide a valuable alternative for people who need a push to make the hill or finish the day. I had my doubts about these devices before Europe. I’m now a believer. 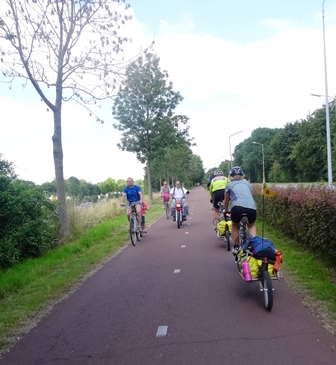 Mopeds and motorcycles ugh! I had my fill. Mopeds are allowed on bike lanes and trails in several countries. It just seemed like an accident waiting to happen. Motorcycles, while not allowed on the paths, are hugely popular for touring. They are noisy and in plentitude — like pesky mosquitos they just keep coming. I think there might be a lesson in this, but it might also just be an observation that’s bordering on complaining. 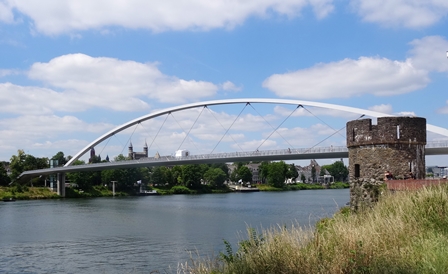 Ohhh, the bicycle facilities. The bridges, trails and protected bike lanes. They were everywhere,  and wonderful. 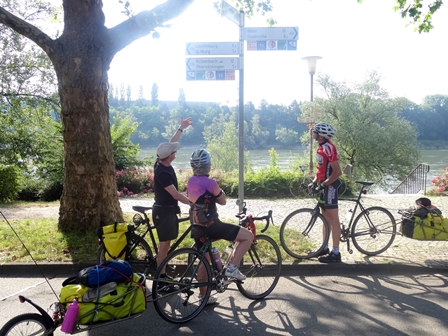 Signs, signs, signs. Europe has them and the U.S. needs them. Stay tuned for next week's post which will focus on the physical side of what makes a great bicycle tourism route.

Wish you a good luck with your quest in "civilising" the US Ginny. Your pictures and comments are beautiful. Well done. I'm leaving on Eurovelo 6-15 tour tomorrow. From Paris to the German Black Forest. along the Loire and other beautiful rivers. I guess, I won't eve sleep tonight, so excited I am :-)

Come please to Indonesia the tropical country in Asia we have alot adventure route junggle, high muontain track and ather. Since 1999 until 2013 was (Tetuko Bicycle Adventure Team) has been explore Sumatera (in West) and also Eastern of Indonesia which is beatiful island and so the beach.

Glad to hear you enjoyed our cycle network. Britain also has an extensive network courtesy of Sustrans.

Don't knock the USA too much as we have enjoyed many miles of cycle touring in your country, especially the Mississippi River Trail. Keep up the good work. We will be back.