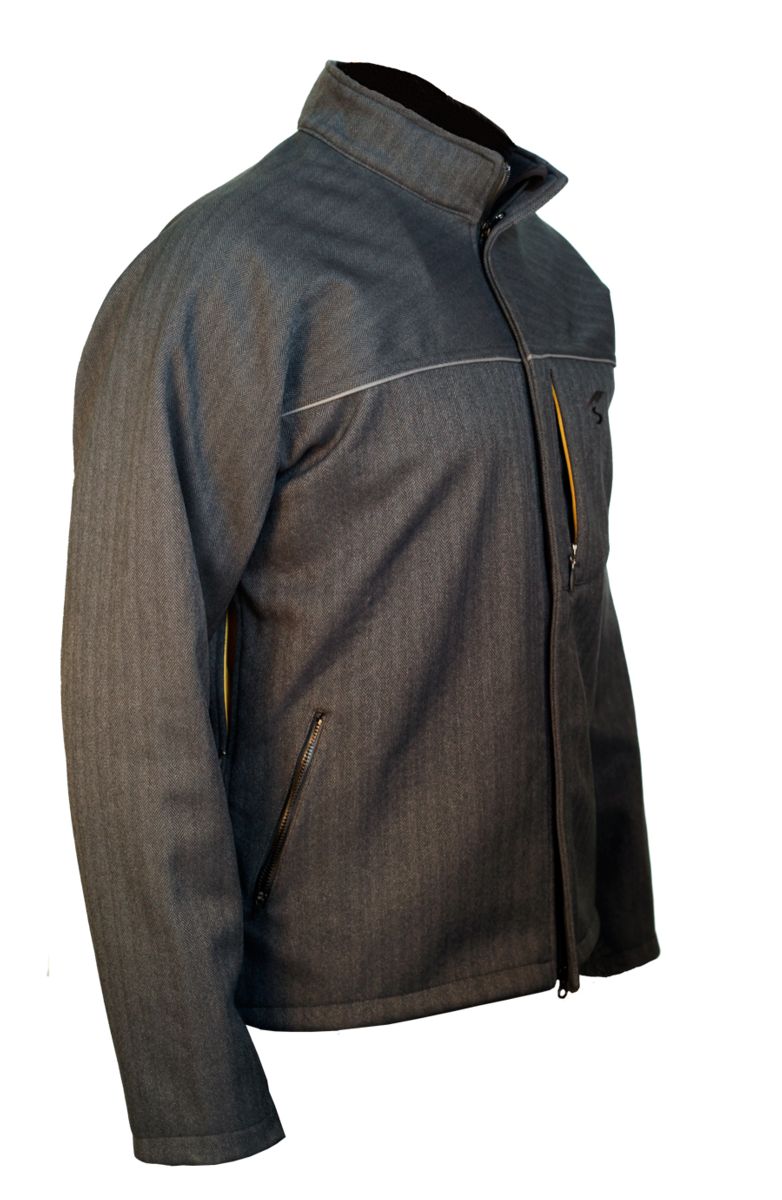 If you want a jacket made for cyclists but is an all-‘rounder, you might be interested in the Amsterdam, which is designed for the urban commuter who’d like to arrive on the scene ready for what’s next, be it a night on the town or a trip to the coffee shop. It’s waterproof soft shell exterior is a dark gray Winter Herringbone that sheds whatever nasty weather conditions you may encounter with ease and style. It features a standup collar, a two-way weatherproof front zipper, weatherproof zippered cuffs, reflective piping across the chest and back, and two pit zips. For storage, there are two zippered side outside pockets and inside there are two open-top pockets and an internal chest pocket which can be accessed by a zippered chest pocket with an audio port. The Amsterdam’s drop-down tail is long enough to cover your backside and features a reflective rear panel. When your backside doesn’t need protecting, the tail can be retracted and held in place by snaps. The Amsterdam isn’t lightweight, but if you need a jacket to cut through nasty weather, it’ll get the job done. – MD 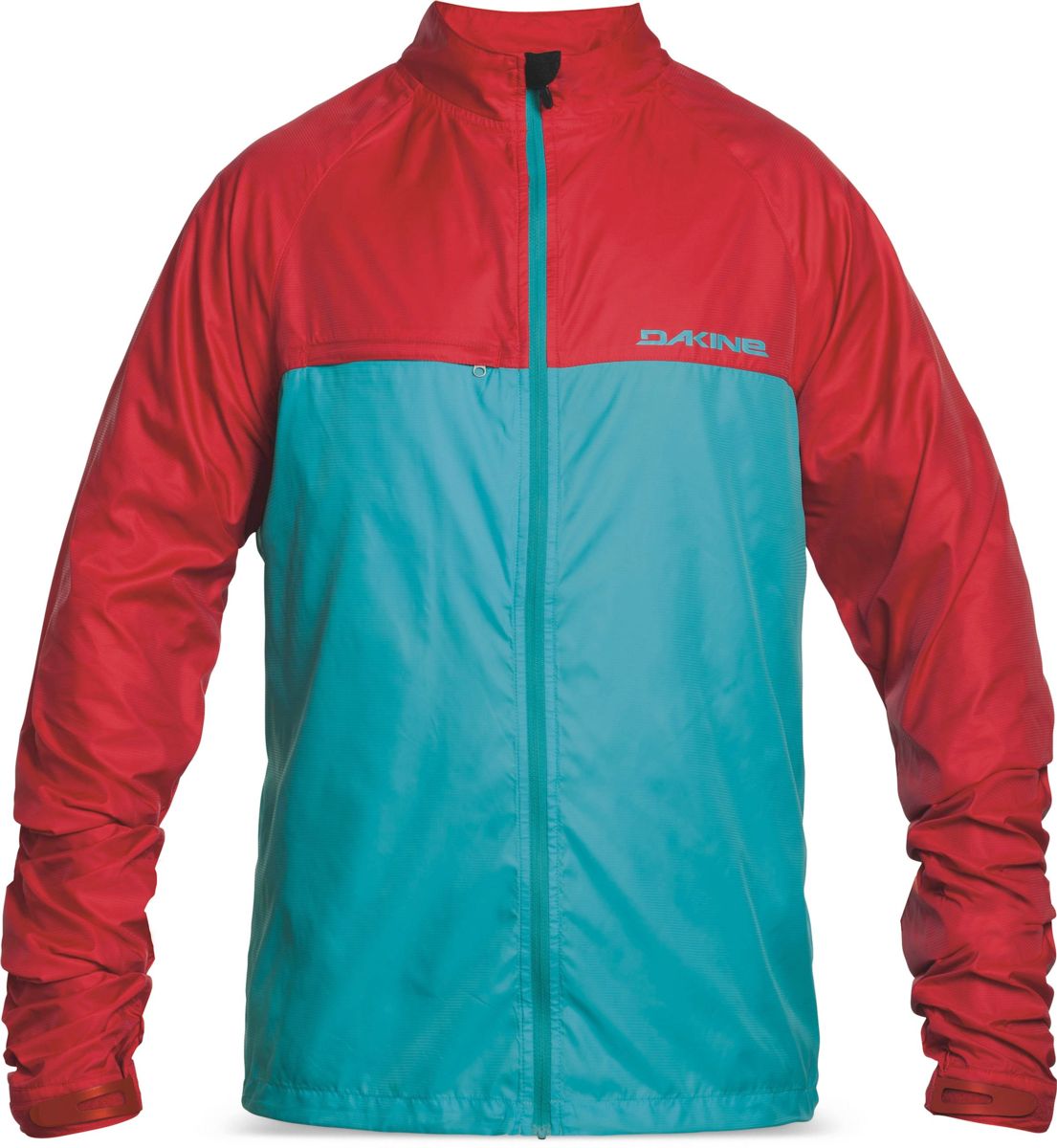 If you’re looking for a minimalist lighter-weight jacket, check out the Dakine Breaker. Weighing just over 2 oz., it’s made of super lightweight ripstop nylon and is designed to block wind and light rain, but not much more than that. It features adjustable cuff tabs, a drawcord hem, a reflective logo on the front and back, and one chest pocket. And when the sun comes out and the wind dies down, you can stow the Breaker inside the chest pocket and stash it away. The Breaker comes in black with bright blue accents or Threedee (pictured). – MD 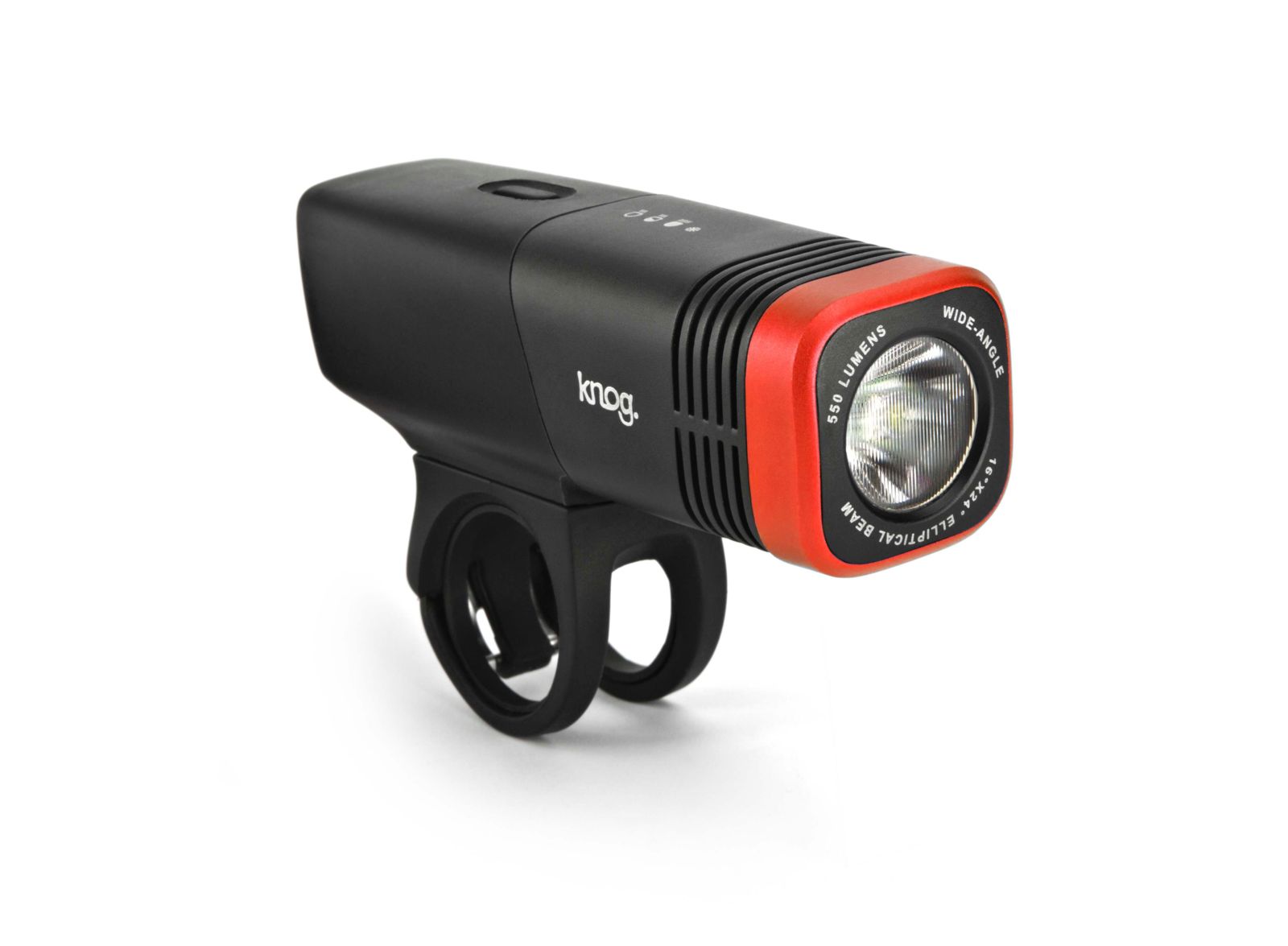 The Blinder 5.5 is a high-output 550-lumen light which uses an XM-L2 Cree LED. It features an elliptical 16 x 24 degree beam that offers excellent and consistent visibility to the rider in the darkest of conditions. The beam can be seen for 1,000 meters so other road users won’t miss you unless their eyes are closed. It has four light modes: high (2 hour runtime); medium (3.5 hour runtime); low (8 hour runtime); and flashing (17 hour runtime). The Blinder is charged via USB and comes with a handy extension chord.

The housing is UV resistant silicone rubber with an anodized heat sink to keep the Blinder from overheating. The Blinder turns on by holding the power button for .75 seconds which reduces its chances of being turned on by accident and it features an indicator light so you can see how much juice remains in the Lithium-ion battery.

The Blinder weighs 5.3 oz. and comes with 2 removable silicone attachment straps for handlebars in the 25-35 mm range. A helmet mount is also included. – MD 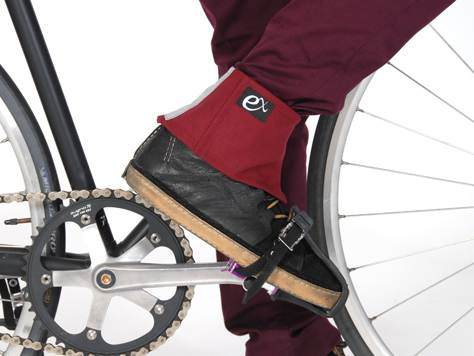 So you want to keep your right pant leg from interacting with your chain? Who doesn’t. I can’t really think of an example where that’s a good thing. There are plenty of straps, clamps, and slappy things out there that will help with this insidious problem but my new favorite is the StaySharp Commuter Cuff. These made-in-the-USA Cordura cuffs are designed with a cyclists actual leg/ankle/foot anatomy in mind so they don’t only keep you pants out of the your chain (and clean), they keep you shoelaces out of there too. In addition, there’s reflective trim on the back of the cuff and, best of all, the StaySharp fastens my jeans securely to my non-pencil-sized calves (many of you probably have these too). Exposed Seam offers the StaySharp in a variety of colors too. So, stay sharp and keep your pants clean. – MD 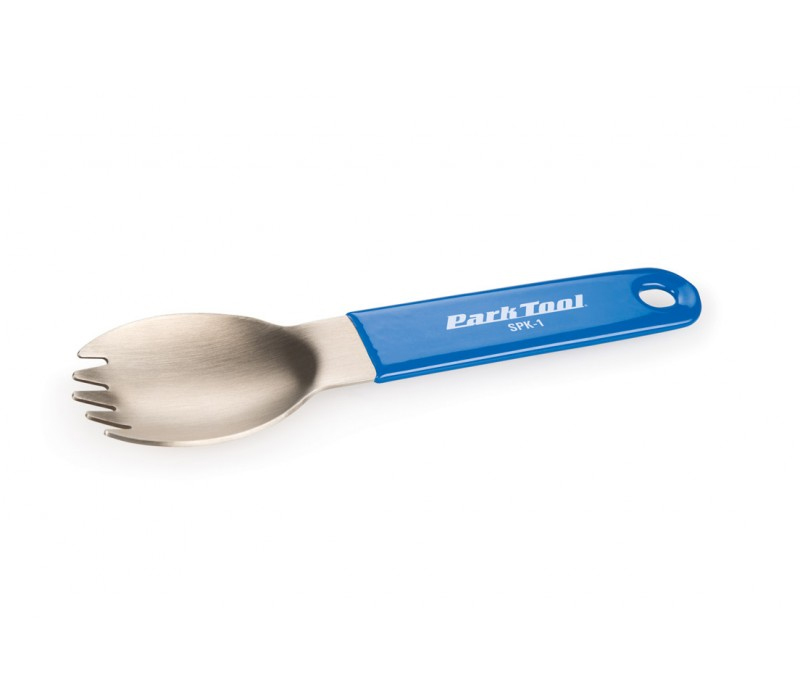 Many cyclists carry a small pocket knife with them when traveling by bike, and why not? A good knife is a remarkably handy thing to have in your toolkit. If you’re in that group, you’ve already got one third of the utensils you’ll need when camp cooking. The other two, spoon and fork, are also important, so you might want to consider the Park Took Spork. Made of food-grade stainless steel (and coated in Park Tool blue), it weighs only 1.2 oz. and, because the sides of the spoon are straight, it will double as a slotted screwdriver in an emergency. Cereal? Salad? Soup? Pasta? You name it, the Park Tool Spork will help get nearly all necessary food items to your mouth so you can keep your system fueled up for another day of cycling. – MD 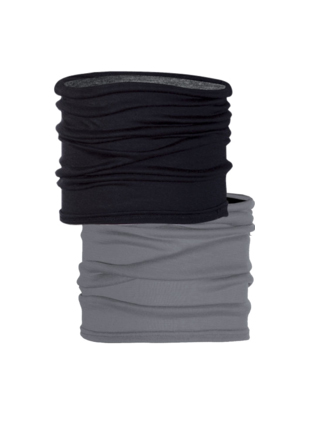 Sometimes it’s the simple things that can make or break an epic trip or a ride to work. There are all kinds of specialty products to keep out the cold or ward off the sun, but sometimes what you need is one-piece quiver stashed in the top of your bag to save your skin (literally) when conditions turn foul. The new merino headwear from Buff fits pretty much any bill perfectly. Neck gaiter, face mask, head band or some combination thereof, the tube-shaped Buff can pull whatever duty is required.

I’ve seen skiers sporting Buffs on the slopes for years but always dismissed them in favor of zipping up a shell jacket a little higher or growing a beard during the colder months of the year. Well, with the launch of a slightly shorter, super-soft merino wool version, my tune has changed. More flexible than a full balaclava in the cold, the merino Buff has been invaluable on -20° morning commutes to Adventure Cycling’s headquarters. And though it’s touted as one of Buff’s warmest models, it’s a perfect under-helmet or neck companion on hot summer afternoons after it’s been soaked in cool water.

With Buff advertising more than a dozen ways to wear the full-length headwear ranging from balaclava to pirate hat (a style choice that went untested, our neckwarmer can only pull double duty as a neck gaiter or face mask), it remains to be seen how much elasticity it retains after being pulled over this tester’s XL dome in the long term. But when the mercury drops and there’s not enough room in the pannier for a full complement of headgear, it’s an astonishingly flexible one-stop shop. – AS 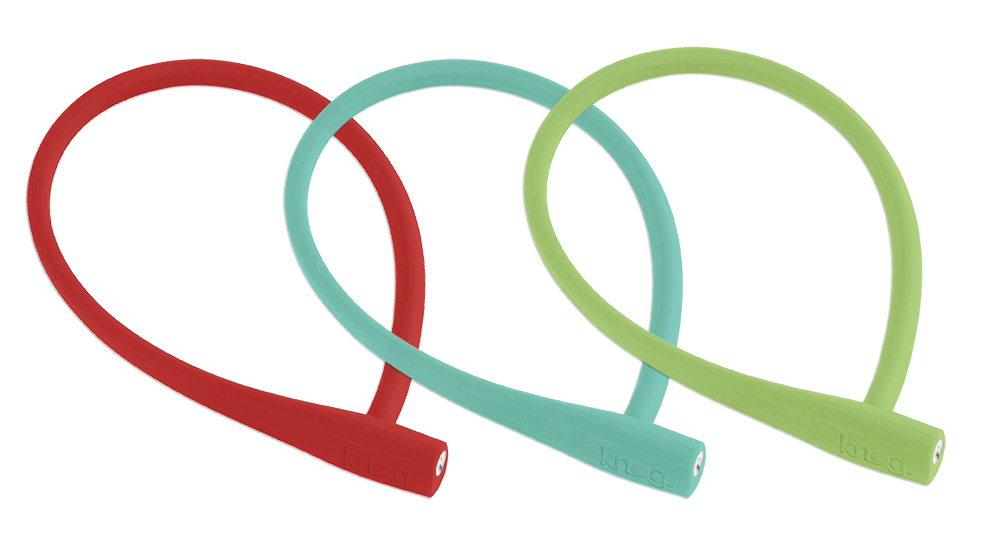 Sometimes you need a lock that can stand guard like a rottweiler in a junkyard. And sometimes a dachshund yipping from behind a door is enough to send thieves on to an easier target. And here’s the thing, a dachshund is a lot easier to stuff in a backpack.

For urban commuters and bikes messengers plying sketchy neighborhoods, industrial strength bike locks are plentiful. Big, hulking chains and shanks the size of a man’s forearm provide around-the-clock protection and weigh as much as a cinder block.

But some trips don’t require Secret Service-level protection, and Knog’s Party Frank is the perfect tool for superlight security. Weighing in at just 250g and as soft as a dog’s squishy toy (something it could be mistaken for, keep this one hidden from Fido), the Party Frank is small, light and easy to throw in a bag or just around the bars and practically disappear. A 5mm steel cable is overmolded with soft silicone to create a thin, 12mm-diameter cable ending in a stainless steel locking shackle to provide a short but sturdy quick-lock option.

About that lack of length, at just 620mm long it takes a perfect hitching post and head angle to lock both the frame and front wheel, so a sticky fingered wheel thief could leave you wheelie-ing home. Plus, it must be said that a 5mms of steel is no match for even cheap hardware store cable cutters, so if your steed is unattended for a long stretch, something a little more substantial is probably in order.

All of that aside, though, the Party Frank is perfect for around-town grocery trips, coffee shop runs or even a tour, so long as you’re not planning to wander too far from your rig. It’s tiny, weighs almost nothing and can twist into nearly any handy carrying shape to slide around bars and brake levers as-needed.

If weight matters less and peace of mind, the Party Frank has heftier siblings – the Kabana and Kransky – with thicker steel cores but the same soft overmolding. They’re neither as light nor as flexible, but the Kransky’s 12mms of braided steel cable with a fiber core should prevent more robust attempts to abscond on its charge. – AS