Gift ideas for the cyclist in your life:

Every time I go on tour, inevitably I end up at a campsite with a bottle of something I can’t open because I’ve forgotten a corkscrew. As a result, I have about five wine bottle openers in my kitchen drawer from bike tours past, and none in my panniers. I have been looking for years for a simple corkscrew-knife combination with a blade more substantial than a Swiss Army blade, that is inexpensive, but durable and large enough to make a good all-around camp knife. I was thrilled when I found this one, and I have to say it has exceeded my expectations in both aesthetics and quality. Opinels have served as the standard pocket knife of french farmers, cyclists, picnic-goers, and adventurers off all sorts for the better part of the last 123 years. Manufactured in France, in the town of Saint-Jean-de-Maurienne, Opinels are fine quality, durable, and inexpensive, often made with stainless-steel blades and beechwood handles. They come in many different sizes and styles. The corkscrew knife features a corkscrew of the quality that would be found on a more expensive wine-bottle opener — leave it to the French not to skimp on the important stuff. The blade is strong and locks open or closed with Opinel’s signature swivel mechanism. This is a handsome, well-made knife with a touch of stylish utility that’s not too pretty or costly to actually use. At $30, it would make a great gift. The non-corkscrew varieties, like the classic Opinel No. 8, sell for as little as $11. –AR 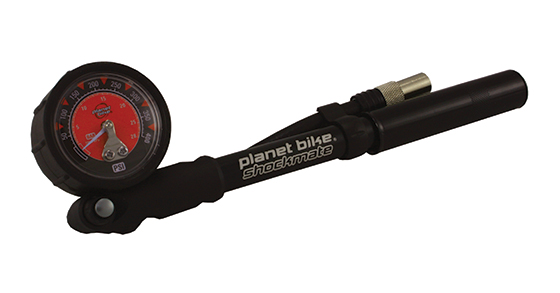 If you have an air suspension fork and/or rear shock on your bike, a shock pump is an essential item to have in your tool kit. While most people don’t fine tune the pressure in their shocks regularly, everyone will notice the need for a shock pump eventually, especially when you go to ride your bike in the early spring after letting it hang out in the garage all winter. Much like tire pumps, there are a lot of shock-pump options to choose from. One that’s worth taking a close look at is the new Planet Bike Shockmate 2.0. In its second version, the Shockmate 2.0 pump has a number of great features, starting with a sturdy aluminum construction that feels solid when in use.

You’ll appreciate the swivel hose that makes it easy to attach to shock valves, and the large pressure gauge can be read clearly from a few feet away. The Shockmate 2.0 can produce pressure up to 400 psi and, as far as accuracy is concerned, the bleeder valve is easy to control, giving you the chance to really fine tune your pressure. The pump also features a no-air-leak valve release system. Air loss has always been an issue for me with most shock pumps, and this system does a great job of minimizing leakage when removing the pump from the shock. At only 5.3 oz., and 8.5” long, this won’t be a burden if you want to pack it along on a ride. – JT 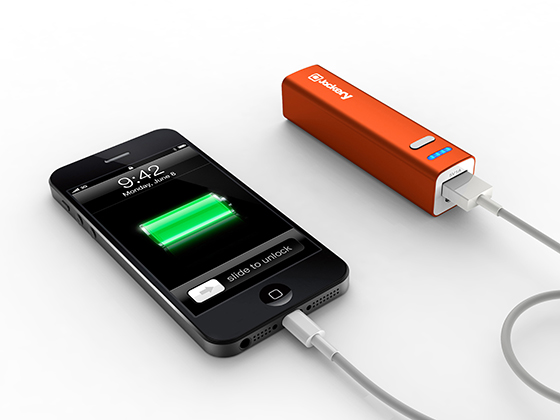 Since the inception of the smartphone, a problem immediately became obvious — how to keep them charged for extended periods. It didn’t take long for gizmos to appear on the market that would charge a smartphone on the fly but they were large and bulky, but it also didn’t take long for the modern human instinct to miniaturize things to kick in so that there are now many streamlined chargers. One of these is Jackery’s Mini. It’s 3.7 in. long, .9 in. wide, .8 in. high and weighs 2.7 oz. — very packable. With a power capacity of 2600mAh and 1A of output, it’ll charge your smartphone to full capacity before needing to be recharged itself. From full strength, the Jackery Mini charged my iPhone 5, which was at 10% capacity, in 2 hours. I can’t vouch for Jackery’s claim that it has a standby time of 6 months, but I can vouch for it’s stylishness, a feature some people will appreciate. The Mini also features 4 LED charge status indicators and is charged via USB micro using either a computer or a wall outlet. 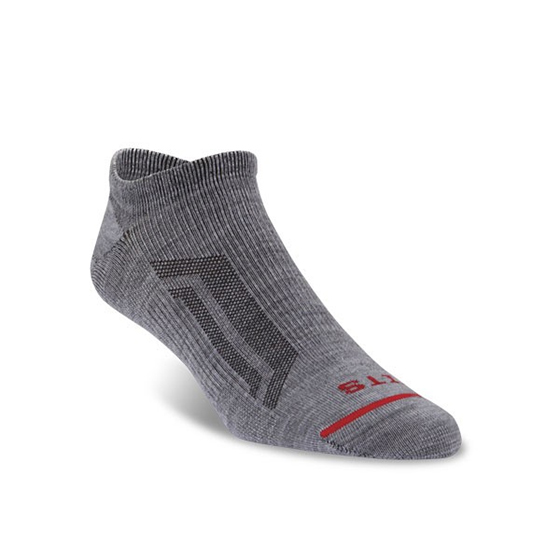 Stunned. That’s the only word I can use to describe my state when I first attended the Outdoor Retailer Summer Market and realized there was an entire wing of the trade show dedicated to socks. Socks. You know, the things that cover your feet, versions of which you can buy at big box stores for $2.99 per thousand (okay, three). But if you’d rather not contribute to the process of exploiting the cheapest labor force on Earth (currently Bangladesh) and would rather purchase socks that will make both your feet and conscience happy, forego the cheap crap and get some FITS Ultra Light Runners. Ultra Light Runners? I know, you’re a bicyclist, and FITS makes socks specifically for cycling (fitssock.com/products/biking.html), but I find the short sock for runners best for bike travel. They pack smaller and feel great. Made of 56% wool, 35% nylon, 6% polyester, and 3% spandex, they hug the foot well but aren’t bulky — and they’re tough. I’ve been wearing them for all occasions for months and they barely show any wear. And FITS has been in existence since 1902, so you know they’re no fly-by-night operation. 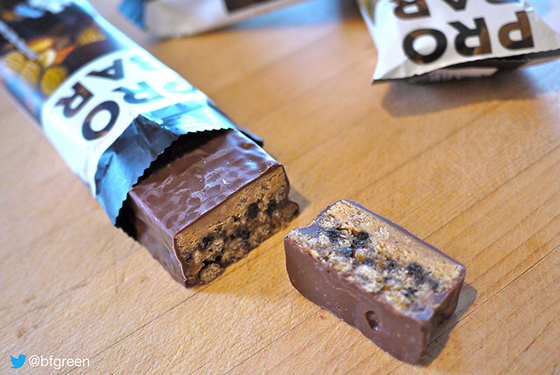 I’ve sampled an astounding number of energy bars through the years and one of my favorites is the PROBAR Core, especially the Peanut Butter Chocolate flavor. One reason is its ingredients: it offers 20g of protein, 5g of fiber, and contains flax. Based on my dietary proclivities, it’s a great combo, and they taste pretty darn good. Better than a Snickers? Nah, but the Core is created using only organic compounds. If you aren’t a protein monster like me and haven’t discovered the wonders of flax seed, PROBAR offers a variety of other bars I found equally pleasing. 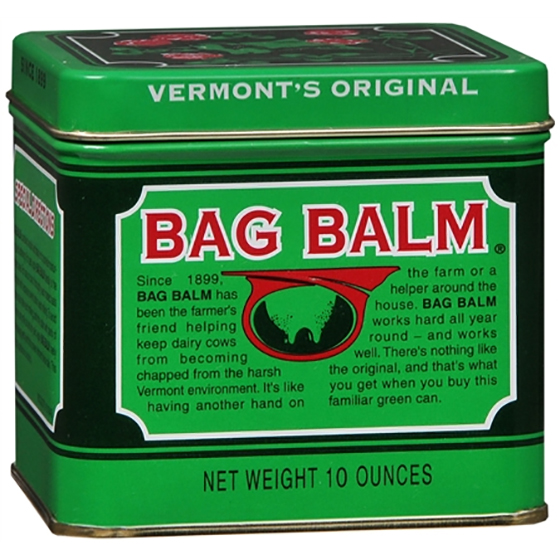 Bag Balm of Vermont was originally created in 1899 to benefit both humans and cows during the milking process, but this wonder salve was good enough for Admiral Richard Byrd and is great for cyclists too. The ingredients listed on the package are 8-hydroxyquinoline sulfate 0.3% (antiseptic) in a petroleum jelly USP and lanolin base, but I’d swear there is menthol in there too. Anyhow, whether you need something to soothe and alleviate the occasional discomfort associated with the contact points between the nether regions and a bicycle saddle, you’d like to make your milk cow a bit happier, or you want to protect your dog’s nose from inclement weather, snag some Bag Balm and slather it on. 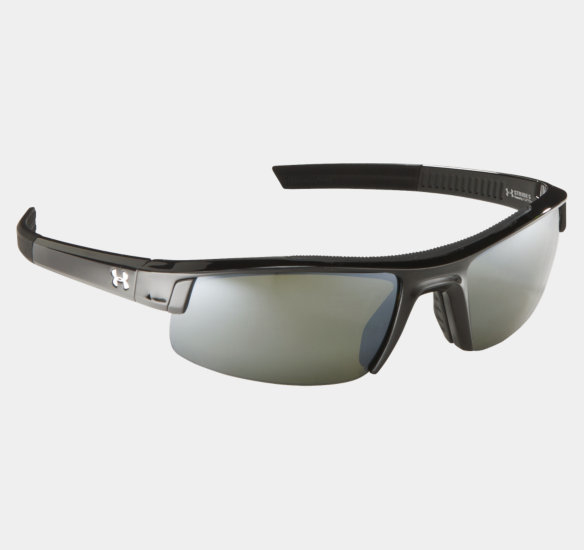 Yes, Under Armour now makes sunglasses, and one I like is the UA Stride Switch. While the style isn’t anything unusual, the lens switching system is the easiest I’ve come across. The reason? One word: magnets. The key attachment points on both the lenses and the frames are magnetized so all you need to do is apply a bit of a tug outward on the lens and they pop right out. To replace, you just slide the lens into the eye-corner slot and release — easier than baking a pie. And the fit is terrific. The nosepad is ample and adjustable and the rubberized temples make sure there is minimal slippage. I found them to only minimally fog up in cold weather and their field of vision more than adequate. The lenses block 100% UVA, UVB, and UVC rays and Under Armour claims they are 10 times stronger than “ordinary polycarbonite lenses.” Sounds impressive. The Switch comes with smoke grey lenses and the options are grey polarized, orange, blue, and Game Day, which is greenish. Oddly, I couldn’t find where to order lenses on Under Armour’s website but they are available here: zappos.com/under-armour-stride-s-lens-pack). 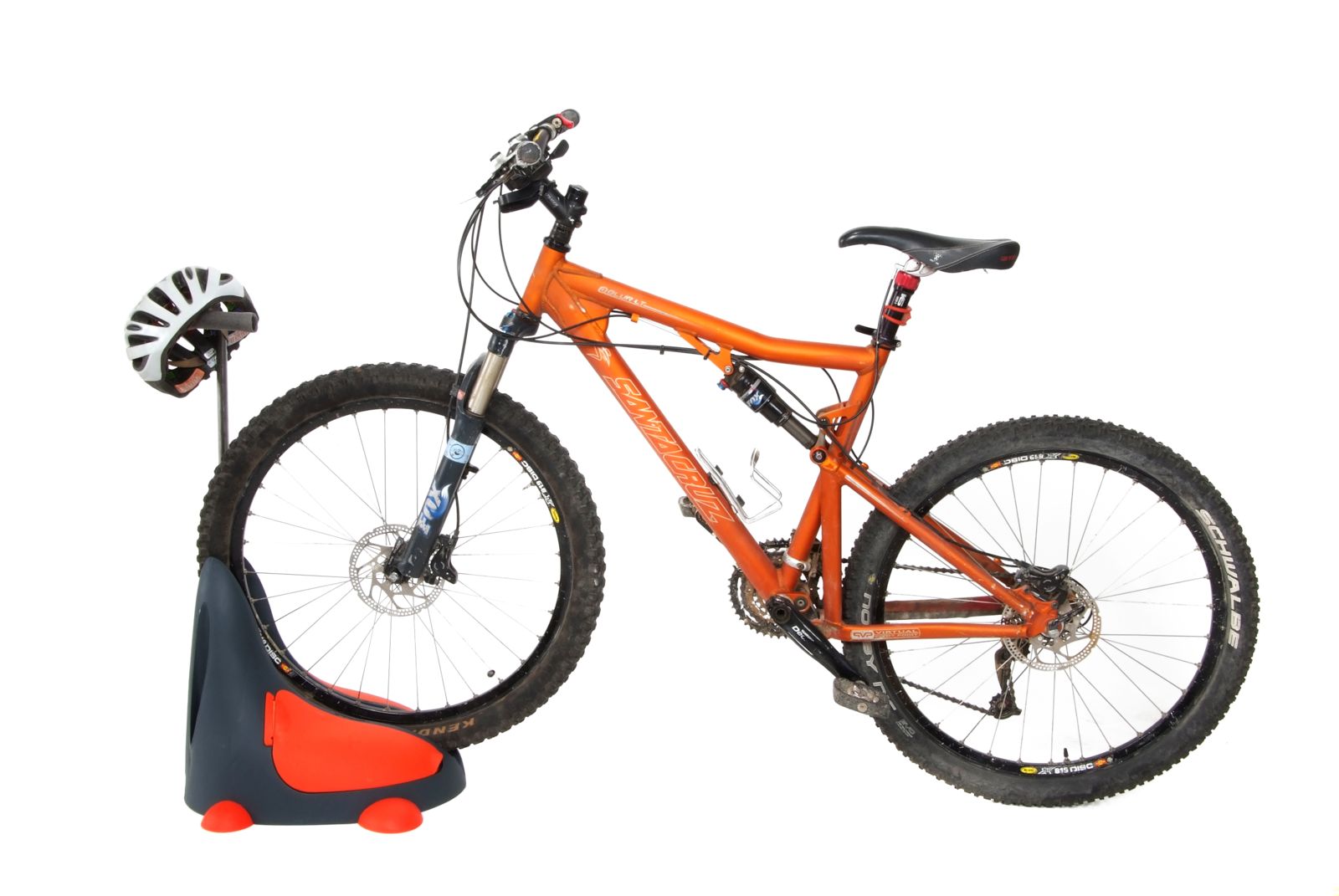 If you’re looking for a cure to the bikes-leaning-everywhere syndrome, check out the ZicTech Z Bike Stand. This simple device allows your bicycle to stand horizontally when you slide it’s front wheel into it’s center slot. You can also store it vertically by employing the adjustable pole. The Z Stand also features feet and suction cups for stabilizing purposes, two ample storage compartments, and additional materials to make it even more secure if you’ve got young children who might like to tug and pull on things. If not, at under 5 lbs., you’ll find it very easy to move around to wherever you might want your bike to stand. Another usage for the Z Stand is as a stabilizer and front-wheel mount if you’ve got an indoor trainer. And, if you’ll be using it in your main living space, it comes in a variety of colors so you can match it to your decor. 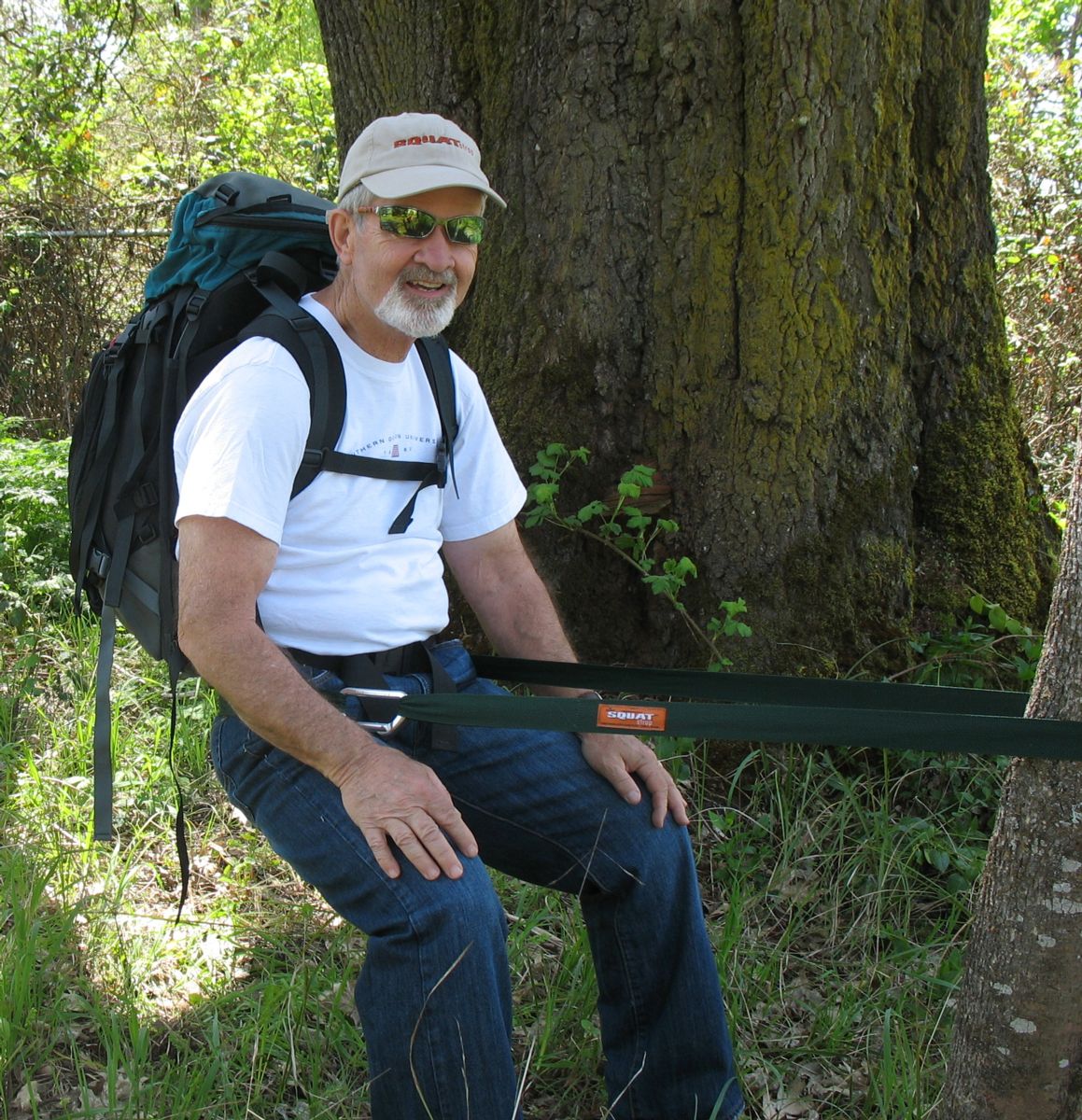 Have you ever been bikepacking and you need to, ahem, relieve yourself? You know, go number 2, but there there are no facilities for doing so? Well, some good folks in Oregon have got you covered. I assume the idea came to them while watching a technician at work on a utility pole somewhere but I can’t be sure. Anyway, if you’re tired of squatting over a log or balancing yourself against an ant-infested mound to do your doodoo (or peepee for the ladies), get yourself a Squat Strap. Yup, it is exactly what is sounds like — a strap that makes the process so much better you’ll be amazed you didn’t come up with this solution yourself. The Squat Strap has a loop at either end and a giant carabiner to connect the two while you lean back with the knowledge that you won’t go tumbling over backwards. Bonus: you can slip the Squat Strap through a roll of toilet paper alleviating that issue as well. Okay. Enough potty talk. I think you’ve got the idea. 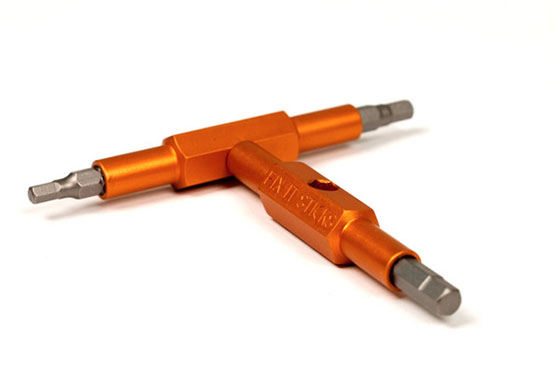 Fix It Sticks are an interesting twist on the multi-tool idea. These tools come in various configurations many of which cyclists will find useful in the shop or on the road. Options include 4, 5, 6, hex and slotted screw driver; 4, 5, 6, hex and Phillips #2 screw driver; 4, 5, 6, hex and torx 25, and more. There is also a customize option so you can create your perfect sets. The cool thing is you can insert the Sticks into one another allowing for a excellent grip for those times when you need to apply a lot of pressure. The sets are stored in a pouch made from used bicycle tubes for easy and protective storage. Each set weighs about 2 oz. 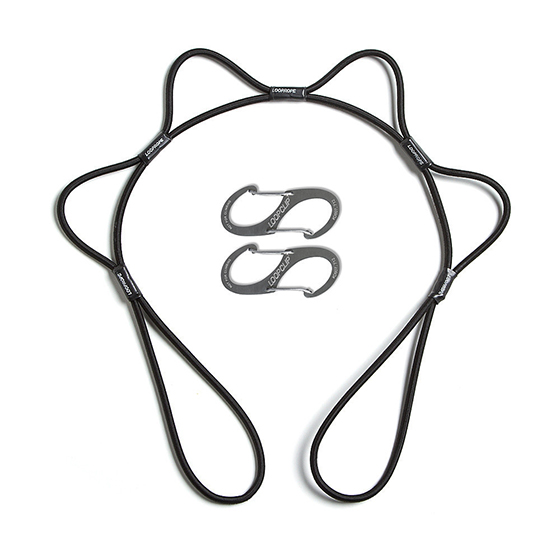 Do you find standard bungie cords to be too limiting? If so, check out LoopRope. It’s a more flexible tie-down solution that, by employing double-sided carabiners instead of a J hook like on a bungie cord, allows for much more secure connections and better stability of loads. But the real advantage is that you can create a connection to suit many situations by using the loops, which are positioned along the central cord. You can do this by clipping to whichever loop most tightly secures your load or you can slip the cord itself within loops. Videos demonstrate this much better than words so check them out here: looprope.com/videos. They come in 3 and 5-foot sizes and can be used to secure your load while touring and, if you’re bikepacking in bear country, they come in handy for hanging food well off the ground. Additionally, for that extra peace of mind when you use a car carrier, you’ll be sure your favorite bikes stay well secured.