In my former life as a software salesman, I spent what seemed like 30 percent of my waking hours working the floor in massive trade show exhibition halls. One of the reasons I became a photojournalist was so that I wouldn’t have to set foot in one of those places again. But last week, Europe’s largest outdoor gear show on the sunny shores of Lake Constance, Germany, lured me into trade-show-dom once again with the promise of a fresh batch of Euro-swag to demo on a future project.

The ground rules for my comeback 2.0 trade show gear preview: 1) review products only from European companies that sell into the U.S. market; 2) likewise, only small to mid-size companies with innovative products; 3) try not to get swayed by the Swedish booth babes or free Weißbier pints.

The following items are some of my favorite stuff from the show (please note that some of these products will not be available until 2011):

The ultra-light backpacking craze is starting to cross over into the bicycle touring community (see Aaron Teasdale’s excellent article on bikepacking here). While I love the idea of shaving off a few pounds of gear where it makes sense, I do not relish sleeping under a tarp or on top of a paper-thin mat for extended bike tours. Maybe I can have my cake and eat it too?

In 2011, UK-based Terra Nova will introduce the world’s lightest double-wall single person tent — the 495 gram (1 pound) Laser Ultra 1. What I really dig about this design (besides see-thru ULTA flysheet material) is that my 6’4” self can actually fit inside. The Ultra 1’s less expensive cousin, the Terra Nova Laser Competition, offers a larger vestibule and non-see-thru fly, and weighs in at 870 grams. For both of these models, the poles are cut to a length that allows the packed tent bag to fit inside standard-sized panniers. The inner tent can also be removed, permitting the fly to be used as a tarp. 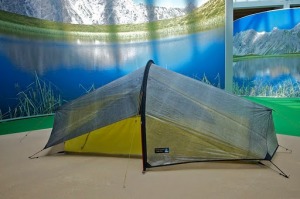 With its SynMat 7 UL 470 gram inflatable sleeping mat, Switzerland-based Exped has managed to create an insulated air mattress that nearly matches the weight and pack size of the current uninsulated lightweight mattress king, Therm-A-Rest’s NeoAir. Synthetic filling is laminated to the top and bottom of the inner wall, yet the SynMat easily rolls into a jumbo-burrito sized package. 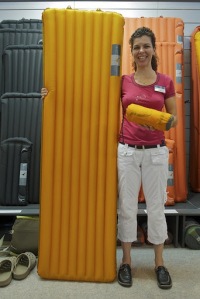 German-based Supernova had me drooling for a sample of their Airstream LED headlight. They’ve managed to design a water-resistant aluminum shell that dissipates excessive heat build-up (which can be problematic for battery-powered LED systems). What makes the Airstream really interesting are the standard USB port charger and simple quick-release handlebar mount that allows the headlight to double as a flashlight at camp. Weight: 150 grams. LED: 370 lumens. Battery Life: 2.4 to 24 hours, depending on power setting. 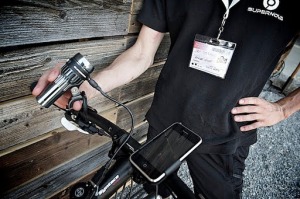 The Plug, from German bike manufacturer Tout Terrain, is a USB charger that pairs with a front dynamo hub in a neatly integrated steering tube design. The company has developed a special cable which allows finicky late model iPhones to charge directly from the system (the iPhone 3gs/4 can't charge straight from a dynamo hub). Other USB devices, like the Supernova Airstream (listed above) and GPS units, are also fair game. 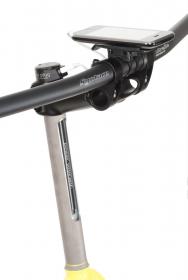 Your backside can now enjoy an organic saddle experience courtesy of Swedish Bessie. Brooks of England has partnered with a certified organic Swedish cattle farm to offer their classic lineup of leather saddles in a more earth-friendly, "SELECT" option. The marketing rep at the show told me that during his visit to the farm, some of the employees could could actually match the name of a cow to each saddle sample. 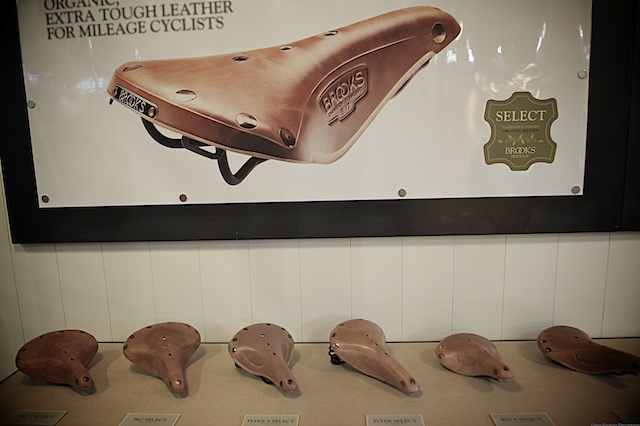 The Brooks Hamstead stood out amongst a glut of new bags designed to make urban jaunting more stylish. The carry straps are fitted with oversized carabineer-like clamps that secure quickly to a rear rack. 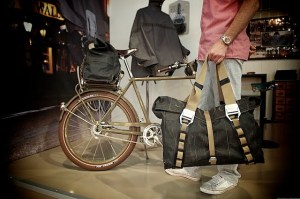 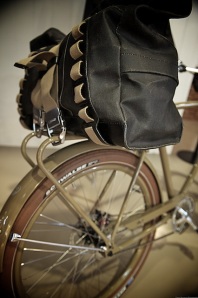 The Bergmonch (Mountain Monk) is the brainchild of two German engineering students who spent their free time between studies hiking and mountain biking in the Alps together. During one of their journeys they came up with the idea of a full-suspension downhill push-bike that folds into an integrated backpack, and they brought the plan back to the classroom as their senior thesis. The Dutch-based cycling company Koga Miyata caught wind of the project and offered to produce the Bergmonch, with German outdoor gear behemoth Vaude. The result, a creative backpacking pushbike that looks incredibly fun. 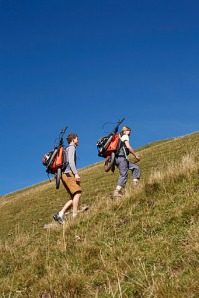 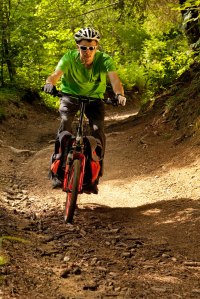 GREGG BLEAKNEY is a writer and photographer with a storage unit based in Seattle, Washington, and who is currently working in Italy. http://www.gbleakney.com/ / Twitter: gthefish

Love that trail, I'm spending a great part of the next year on my trusty two wheeler testing as much of the trail, and me, as possible. I'm combining the bike trail adventure with a fundraising effort for my favorite charity(SPCA). Anyone can combine raising money for their charity and a personal life changing adventure. More details on my website.

If you hadn't said anything about booth babes, I wouldn't have thought about them. Kinda disappointed there isn't even one pic of them. I remember for my 1980 transam ride, I bought an Early Winters Goretex tent. One person. 2 pounds. Looked like a 7-foot orange condom. Bad if you get stuck with a lot of rain and no place to sit up in while you wait it out in camp. The head of the tent was no more than 2 ft high. But it saved me 2 pounds as compared to regular 2-person tent that would have weighed 4 pounds. Between the headlight, the mat, and the tent, my 1980 trip could have used those items on a few specific days and nights, where the either ground wasn't exactly smooth to sleep on or when I was riding at night and all I had was a small pocket flashlight that just barely lit the white line on the side of the road.