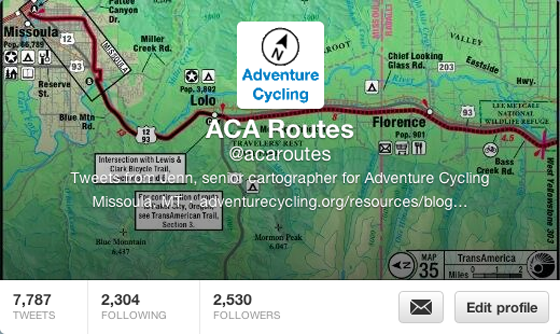 When Routes & Mapping joined the Twitter-verse in June of 2010, I had no idea where it was going to go. I've been impressed time and again with how much information can be conveyed in 140 characters.

This arena has been a nice opportunity to pass along travel planning resources, great blogs to check out, or interesting tidbits about maps and cycling that I encounter on a daily basis. Unfortunately, the feed information doesn't live forever so you have to keep up in something near real time to gather all the great comments and conversations.

I've been able to bulk up our map addenda folder a bit by filing away comments, corrections, and general feedback for future updates. Recently I was even able to receive some help from cyclists on the road and in the area to confirm information about a detour on the Pacific Coast.

Following our route-specific hashtag feeds has been a great avenue for watching people wend their way along the routes. With the launch of our new organizational website, it is easier and more visually pleasing to follow them right from the Twitter tab on a route's description page. If you have a Twitter account, you can even Reply, Retweet, and Favorite tweets right from there. (Note: You don't have to have a Twitter account to follow these hashtags, just check in on the route page regularly to see what's up.) 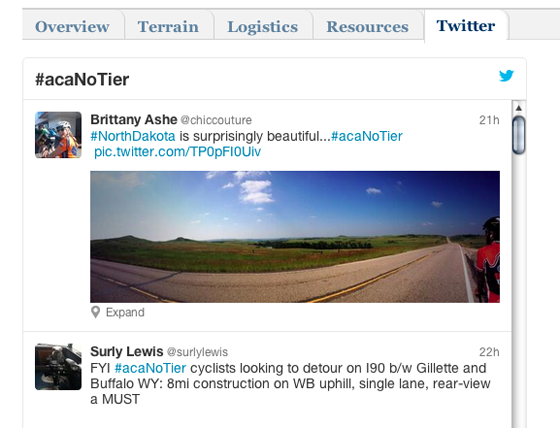 The busiest routes early on were the TransAmerica Trail and Pacific Coast Bicycle Routes. Now all the main routes see some action throughout the year. The activity moves across the country with the changing of seasons in the Northern Hemisphere.

I particularly like it when cyclists offer encouragement and advice to each other. Links to photos have been an especially nice bonus, though on occasion they have caused me to drool at my desk for both scenery and food-related reasons. Fuel for dreams for sure!

I'd love to see the route-specific hashtags used even more to answer planning questions during what is usually downtime for bicycle touring in the Northern Hemisphere. Or to relive the best moments of a tour by tweeting about the juicy red watermelon enjoyed in Missouri on a hot July day. Or ...? The options are open and so are the feeds, so tweet on!