Fatbikes are all grown up. They are more numerous in shops and magazines, and most importantly, they've become more common in the wild. Yet you may not have seen anyone riding a fatbike this year, because that rider was likely exploring the river bottoms, snowmachine trails, gravelly lakefronts, or abandoned singletrack trails where you don't yet ride. But you can change that. With the growing range of options and increased availability of fatbikes, there is, more than ever, a fatbike for every rider. 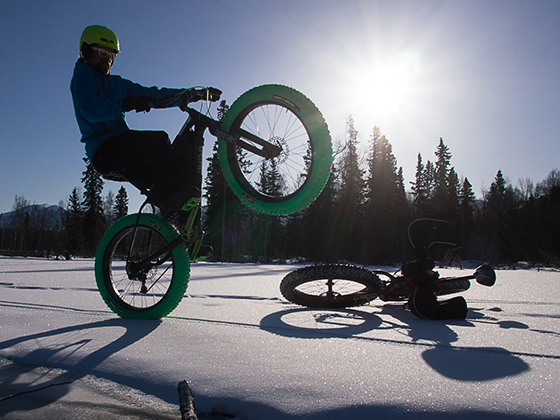 For a general discussion of fatbikes see the Fatbike Buyer's Guide published last winter. While that article focuses heavily on fatbike touring, here we speak about the entire category to reflect new technology and concepts in bicycle-based adventures.

Complete off-the-shelf options from Surly and Salsa pushed fatbikes into the mainsteam back in 2011, about six years after the first purple Surly framesets arrived on US shores from factories in Taiwan. But in the past three years many major manufacturers have released fatbikes, including a host of premium and niche models. A few major players are still absent from the market, but that may change in 2015. Over the last year, the fatbike market has diversified with the introduction of several specialized concepts. The release of a fatbike specific RockShox suspension fork is the most obvious change; several 3.0” half-fat wheel sizes bearing the “plus” moniker, such as 29+ and 27+, are gaining support; trickle down tech and manufacturing has enabled more affordable fatbikes, and lighter bikes at every price range; 20” and 24” wheeled fatbikes are available for smaller riders and kids; and finally, it is likely your LBS is now able to get you rolling on fat tires. The search for a fatbike is not much more difficult than finding any other niche bike, such as a steel touring bike.

The RockShox Bluto fatbike fork, featuring 80, 100, or 120mm of travel and a new 15x150mm front hub standard, provides controlled and tunable suspension for tires up to 5”. While a large tire does provide limited suspension, the Bluto enables safer more controlled handling over rough, technical terrain. It also reduces discomfort at the handlebars and allows riders to optimize tire pressures for traction and flotation, adjusting suspension from the features within the fork (rebound, compression, air spring). The Bluto has launched the fatbike into the mainstream all-season riding market, enabling even more advanced concepts such as the full-suspension Salsa Bucksaw, a seriously trail hungry bike by all accounts. Just last month, Turner also released details of their new USA made full-suspension fatbike called the King Khan, with a 120mm version of the Bluto.

Fatbikes with smaller diameter wheels, but with similarly wide 4.0” tires, open up the category for the entire family. Specialized recently released a 20” Fatboy and a 24” Fatboy, each with their excellent 4.0” Ground Control tire, priced at a reasonable $1000. Smaller wheels are also available from UK brand On-One, who offer a 24” wheel bike. Extra small frame options are still available from many companies with 26” wheels, which are suitable for most shorter riders.

While a lightweight fatbike sounds like an anomaly-- and it was just five or ten years ago-- it has become increasingly standard. Base model fatbikes from Salsa, Trek, and Specialized are hovering just above 30lbs for bikes priced at about $2000. The Salsa Mukluk 3 is still the most versatile platform for backcountry adventuring and touring, with a modern geometry suitable for both snow and trail riding. The Specialized Fatboy is an excellent value for a bike with a lightweight carbon fork and the excellent in-house Specialized rims and tires (the lesser priced $1500 model has an aluminum fork). The wheels on this year's Trek Farley feature the Bontrager's TLR system, bringing reliable tubeless technology to fatbikes. Several other companies are offering tubeless ready rims and tires which reduce rolling mass and the risk of punctures, and also improve ride quality. The range of tires available to the fatbike rider has grown dramatically with additions from Maxxis, Schwalbe, Kenda, Panaracer, Bontrager, and Specialized, supplementing existing options from Surly, 45NRTH, and Vee Rubber.

Mid-fat or “plus” sized wheels are well suited to adventure. For riders who aren't planning to extensively explore in soft conditions, a mid-fat wheel size can provide stability, traction and increased flotation compared to a conventional mountain bike tire. Following the release of the 29+ Surly Krampus several years ago, this concept has grown. The tubeless ready 52mm Stan's Hugo rim, available in 26”, 27.5”, and 29” wheels sizes is one recent development. Several smaller manufacturers are also offering 29+ bikes, often with an emphasis on adventure touring or bikepacking. You can expect to see more mainstream options in the next year, especially with the release of the Bontrager Chupacabra 29x3.0” tire, which is bound to be attached to a complete Trek bike at some point. Also spotted this past year was a prototype 27.5x2.8” tire from WTB, mated to a wide rim on a prototype full-suspension Rocky Mountain frame. The adventure category-- with reference to wide tires and all-terrain capabilities-- is growing beyond rigid steel bikes. The promise of early 1980's ATBs is finally coming to fruition with bikes that are purpose-built to pack some gear and explore new terrain.

The lowest priced fatbikes comes in under $1000 from Bikes Direct brand Motobecane (excluding the few Wal-Mart Mongoose models, which are excused from consideration) and also from a company called Framed, operating from Minnesota. Both retailers deal direct to consumers through their website and ship to your door, so the usual cautions about assembly and live customer service apply. Specialized offers a nicely appointed Fatboy for $1500, which gets you the support of your LBS and a reputable warranty program. Most other manufacturers offer excellent bikes from about $2000 and up, including Salsa, Trek, Kona, Surly, 9zero7, Fatback, and a version of the Specialized Fatboy with a carbon fork. You can expect anything in this price range to exceed the performance of a much cheaper bike, also weighing at least several pounds less.

The Surly ECR and Genesis Longitude (UK) bring oversize rubber and a touring sensibility together with the marriage of 29x3.0” tires and a multitude of frame mounting points for racks, fenders, and bottle cages. Several other 29+ bikes are available from Surly, Niner, Chumba, and Sarma with more trail oriented designs; the Lenz Fat Moth is a trail-munching full-suspension 29+ bike from one of the most innovative bike designers in the US. Soon we are likely to add 29+ options from Singular (UK), Trek, and others. Keep your eyes on the 27.5+ concept in the next few years as well. Alternatively, many fatbikes can be retrofitted with 29+ wheels as well.

The Salsa Mukluk and Surly Pugsley check a lot of boxes for the experienced cycletourist. The steel-framed Pugsley features more than enough attachment points to be gone for a long time, with a smart offset frame design that accepts standard width hubs, useful when fitting an IGH or relacing a wheel in a far flung destination where fatbike hubs are uncommon.

The Mukluk saves a few pounds over a steel frame with a lighter aluminum construction, and a similar range of attachment points to the Surly. The more modern “trail” geometry of the Mukluk better suits technical trail riding, and the frame is designed to accept a RockShox Bluto suspension fork, which comes standard on the Mukluk 2 (and will not fit in a Pugsley frame). The Mukluk also uses the swinging Alternator dropout system found on other Salsa bikes, which enables tensioning the chain with an internal gear hub such as the new 170mm Rohloff XL (not compatible with thru-axle dropouts or 190mm frames). Alternator dropouts also allow 29+ wheels to be used in the Mukluk frame when adjusted to the rearward position. In a similar fashion, the new Pivot Les Fat claims a unique sliding dropout design which adjusts the geometry of the bike to enable the use of 4” or 5” fatbike tires and 29+ or 27.5+ wheels, without compromise. A second headset cut adjusts front end geometry.

The Salsa Beargrease, Fatback Corvus, 9zero7 Whiteout, Pivot Les Fat, Borealis Yampa and Echo are some of the full-carbon fatbikes now available. The Fatback, Borealis, and Pivot also include a third bottle cage mount under the downtube as well as rear rack mounts. Consider a pair of tubeless carbon rims if you have any serious racing aspirations, or if you think your knees will appreciate the reduced rolling weight. If only for reference, fatbikes have been built down to about 20 lbs.

Stay abreast of fatbike tech and trends at Fat-bike.com and Bike Rumor. Share your own winter commuting stories and photos with us on Facebook, Instagram, Twitter by tagging #fatbikefeb. Submit your bike overnight stories to Bikeovernights.org.

I'm registered for my first bike tour, expecting to ride 95 miles on dirt over 4 days at the Beginner+ level. I can choose to ride either a Salsa Blackborow or original Salsa Mukluk. Which bike do you think would serve me best and which tire/rim combo do you recommend? Would it be worth the cost to build a 29er wheel set?

Robert, I'm glad you're getting some good use out of the Beast. I've seen a few in Anchorage, and a few have come in for repair at The Bicycle Shop where I worked. The bike we serviced required new internals to the 170mm coaster brake hub, an odd repair part that we happened to have in stock from some older Sun models we sold. The single speed coaster brake Beast weighed 44lbs.

For $499, a Bikes Direct brand is offering a geared fatbike with disc brakes and tires with actual tread. I assume it weighs under 40 lbs. Despite the two to threefold increase in price, for the added utility, I chose to begin my assessment with bikes in the $500-600 range. To me, and to many other riders, the increase in initial price also makes for a better investment long-term. A $189 bicycle will quickly be declared "totaled" by the LBS when it needs a new wheel, or any other involved service.

From my experience through Anchorage winters, the Beast may be less of a tool to a budget conscious rider than a standard mountain bike (with or without studs). The limited tread pattern, too-high gearing, and weight are the greatest limitations.

Enjoy the rest of the winter!

Nicholas , thanks for the good advice. I will look into Bikes Direct brand as the breast will be retired later this year. You are right about the limitation of high gearing and weight. I have changed the gear ratio to make it better for my riding. The cost of repairs verse the cost of the bike , I understand when you say you don't get a good return on your investment of $189. However, I have been lucky as l have recovered my cost in a lot of ways and feel the experience of winter riding over the past two winters in Minnesota has been well worth the purchase of the beast.

While this may be a good reference for those that would like to buy a fat bike I have to stress that your reference to the Mongoose as being "excused from consideration" as a fatbike is totally wrong. A lot of us don't have the money to buy a $1000 - $2500 and up "overpriced" fatbike. I own and ride a Mongoose Beast and have so for the past two winters. For the price, it's a great start for someone that doesn't have a lot of money to spend but still wants to experience the fun of winter riding. Let's enjoy bike riding like we did as kids when it was just pure fun!