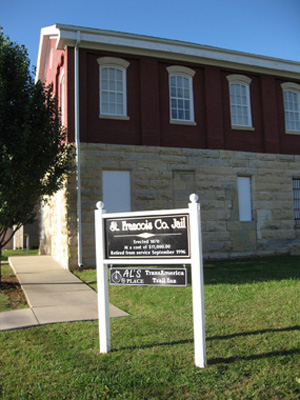 If you need further evidence about the hospitality available on the TransAmerica Bicycle Trail, look no further than Farmington, Missouri. Located on Section 9 of the TransAm, this community has extended its hand in multiple ways to the touring cyclist.

Last summer we received news that they had organized a Pedestrian/Bicycle Advisory Board for the town and that the TransAm route was at the top of their priorities. At that time, they were offering a free, hot shower at the Farmington Civic Center and free camping less than a mile outside of town at Wilson-Rozier Park. The park even has flush toilets and sinks available to cyclists, if they call ahead to the police department and ask for them to be unlocked. In downtown Farmington, cyclists will find plenty of food options and a bike shop is in the works.

The jewel in their crown of offerings is the newly opened TransAmerica Trail Cycler's Inn (also known as Al's Place), a hostel with 14 bunk beds, three bedrooms, a bathroom, kitchen, and laundry room. Interestingly the hostel building was originally the county jail! The building is secured with a keypad so again, cyclists should call the police department for the current code. (See how handy those law enforcement listings can be?) And according to Greg Beavers, city administrator, "In the spring, we will stencil way-finder signs on the shoulder of the road about 2 miles out of town to make the Inn easy to find."

All this adds to the mounting evidence that more miles in Missouri would be a good thing to consider when growing the Adventure Cycling Bicycle Route Network. With that being said, regardless of where our growth takes us in the future, today (and every day!) we're thankful to have such fabulous facilities extending their goodwill to cyclists along our routes!