Editor’s Note: In the April issue of Adventure Cyclist we published the second installment in a series about EuroVelo written by our bicycle travel partners in Europe to outline the routes, challenges in development, and solutions. Below are two additional case studies outlining the European Cyclists' Federation's efforts around Europe. 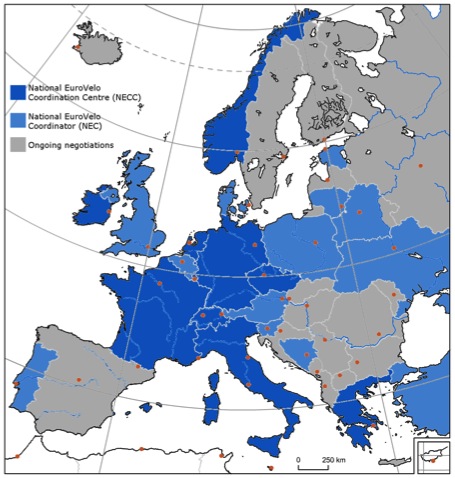 The Iron Curtain Trail – EuroVelo 13 is probably the single most ambitious route proposal in the EuroVelo network.  Stretching over 10,000 km (6,400 miles) from the Barents Sea to the Black Sea, the route retraces the entire distance of the physical border which divided Europe’s Eastern and Western blocs during the four decades of the Cold War. Zigzagging across the borders, the touring cyclist is confronted with the traces of history at every turn. However separation has left an environmental trace too — this literal no-man’s land was all but abandoned for 40 years aside from border posts and watchtowers, and the unique ecological characteristics left in its wake have given it protected status as the European Green Belt. So while there are untold treasures for tourists to discover, the development of the itinerary presents some unique challenges in providing adequate services in some of the most remote regions of Europe.

The project has attracted a lot of attention from across Europe, and won significant funding (most recently 1.4m Euro ($ 1.7m) from the European Union for the development of the southern portion of the trail between Austria and Bulgaria. With ECF providing proven methodology from other experiences of long-distance route development, the project became a test bed for developing national cycling infrastructure standards, networks of cycle friendly services, and usage monitoring systems in countries with no previous structures of this type. In the coming years the route will also start to provide key data on the return on investment for similar routes. This is expected to be quite significant, with a 2012 European parliament study estimating the annual economic impact of the trail when completed at around 355 million Euros ($ 415m).

Through relationships built during this project, negotiations are now ongoing to develop partnerships for EuroVelo coordination in Slovakia, Hungary, Croatia, Serbia, Romania, FYR Macedonia and Bulgaria.

ECF works to ensure the sustainability of European projects by setting up long term management committees along the route, with a similar structure to the French route development committees discussed in Adventure Cyclist. One of the best examples comes from EuroVelo 15 – the Rhine Cycle Route, where a European Union- funded project finished in 2014. With the route infrastructure and signposting complete, the focus of the long-term management committee is ensuring ongoing promotional and marketing activities, maintenance of the route, and providing permanent services such as a helpline for touring cyclists. As its responsibilities only cover trans-national actions, the budget required is somewhat lower than similar structures within countries. Along EuroVelo 15, seven partner organisations from Switzerland, Germany, France, and the Netherlands have committed to contribute a total of 34,000 Euro ($40,000) per year over the next three years to finance this work. Management agreements beyond the lifetime of a project provide funding bodies with evidence that cycling tourism offers not only a huge return on investment, but also a sustainable use of project funding for long-lasting benefit.

A very! interesting read, amazing projects! I am getting busy setting up some cycling facilities in Croatia's area of Gorski Kotar....