Eating Up the Miles in Georgia

"With an expectant wife, a long tour was out of the question. But a quick 20-mile overnighter seemed just the ticket -- out after Saturday morning chores and back by Sunday lunch. Plus, if anything unexpected happened, I could be home in about an hour."

That's what urban geographer Byron Rushing (he specializes in bicycle and pedestrian planning) has to say in this week's Bike Overnight's piece. It's about his ride to Georgia's Stone Mountain Park, which is part natural wonderland and part theme park -- sort of like a cross between ... Yellowstone and Disneyland? Well, maybe.

"Atlanta can be a tough town for cycling," Byron writes. "In-town riding is accessible and convenient, but big roads and long distances often preclude comfortable trips beyond the city. However, the Stone Mountain Trail provides a nearly seamless connection from the inner neighborhoods to the state's most-visited park.

"The route followed my regular morning commute through downtown Atlanta, then turned eastward toward the city of Decatur. Nearing the city, I picked up the Stone Mountain Trail, which is located adjacent to the old Georgia Railroad corridor. Decatur provided opportunities for two quick stops -- one for a cafe lunch and another at the Dekalb Farmer's Market for dinner supplies."

Dinner at his campsite in Stone Mountain Park was almost a different story, however, as Byron had grabbed the wrong fuel for his stove. "Thankfully, enough pine limbs had accumulated nearby that I was able to start a fire and get my pasta boiling with only a few extra minutes of work.

"During holidays, and in the summer months, the park hosts a fantastic laser-light show, so I was lulled to sleep by blaring pop-country hits and a fireworks extravaganza."

In closing, he writes: "Finally, the best reason for a long morning bike ride is a big breakfast. My wife was out for morning errands as I neared home, so we met for brunch at one of our favorite local spots. In only 28 miles and 22 hours I managed to get a great break from my regular routine and was still home in time to finish the weekend's chores."

An overnighter means not missing Sunday brunch with my sweetie.

Read the rest of Byron's story at BikeOvernights.org. There you can also take a close-up gander at our current Photo of the Week, which comes from The Tulip Tour: April in Northwest Washington, by Don Nordgran. 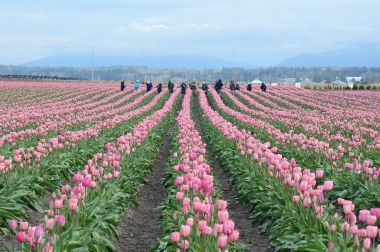