Donate Today for Your Donation to be Matched 2:1

So far USBRS supporters have contributed $26,830 to meet the initial $35,000 match. With the match, supporters have raised $53,660 of the $100,000 campaign goal. Thank you so much to everyone who has contributed to the campaign thus far. You are building the USBRS mile by mile with your support.

Planet Bike is also sponsoring today’s sweepstakes giveaway: the brand new Blaze 2 Watt Micro Lightset. It features the new 2W Micro (available in 3 colors) and the ultra-effective Superflash Turbo Tail Light. The Micro features high/low modes and the Superflash strobe and comes in a compact case. It delivers 139 lumens to light up the path and make cyclists visible both day and night. The Turbo tail light uses a 1 Watt LED plus 2 red LEDs for visibility up to 1 mile. It makes use of the attention-grabbing Turbo flash pattern and up to 100 hours of run time on 2 AAA batteries. 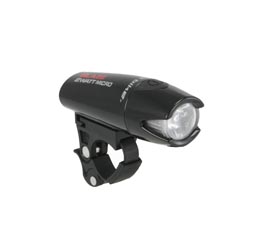 According to Planet Bike, “visibility at night is a no-brainer, but many people don’t realize the importance of being seen in broad daylight.” They’ve given us three Blaze 2 Watt Micro Lightsets to give away in today’s sweepstakes. Simply make a donation to the Build It. Bike It. Be a Part of It. campaign by 5pm today, May 13, 2013, to be entered to win. See the sidebar on the campaign page for full contest details.

I’m stoked to have Planet Bike as a sponsor of the U.S. Bicycle Route System. I’ve always admired Planet Bike’s commitment to bringing about positive change for people, their communities, and the environment. Planet Bike donates 25% of company profits to causes that promote and facilitate bicycle usage. To date, this generous organization has donated over a million dollars to the cycling cause.

“Despite being a simple machine, we have always believed that the bicycle has great potential to help improve the world and the lives of the people in it. From the start, we have embraced an alternative corporate purpose which seeks to help get more people on bicycles by making our communities friendlier places for the self-propelled. The USBRS’ goal of linking urban, suburban, and rural areas using a variety of appropriate cycling facilities aligns quite nicely with our goals,” says Mark Lalonde of Planet Bike.

Some of the cycling-related developments Mark cites as particular interest to Planet Bike include the popularization of bicycle touring, both on and off-road. “People are experimenting with equipment, making their own, and setting off for the night, weekend, or longer, and the knowledge base continues to grow.” Mark also tips his hat to Trans Iowa for being one of the first unsanctioned races of its kind. “Now gravel races and rides are popping up all over the country. These self-supported rides are only as serious as you want them to be. Enjoying the scenery and challenging your own limits are the greater goals.”

When asked where Planet Bike would like to see cycling in America five years from now, Mark replies that the organization loves to see the continuous improvement cycling ifnrastructure — dedicated bike paths, separated bike lanes, and designated bike routes, which help inspire more people to bicycle. Planet Bike would also love to see cycling as a larger part of the Transportation Bill.

*No purchase necessary. Check out the sidebar at www.adventurecycling.org/beapartofit for full contest details.