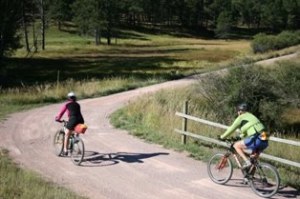 Just before Aaron Teasdale left his position in the Adventure Cycling publications department, he and I had a discussion that revealed we both perceive a need for more off-pavement bikepacking routes like the Great Divide. He and I quizzed one another: What would be a good location for such a route? Western Washington and/or Oregon? Maybe. The Great Basin of southern Idaho and northern Nevada? Possibly. Paralleling the Appalachian Trail on the Eastern Seaboard? Perhaps.

Or how about the upper Midwest? Yes! We both agreed that Michigan, Minnesota (where Aaron was raised), Wisconsin, and even hilly northeast Iowa (the state I grew up in) could be the place. The upper Midwest offers tons of rural gravel roads in farm country and if you go far enough north, plenty of logging roads and snowmobile trails that web through state and national forest lands. Add in a huge regional population base and relatively manageable terrain, and this could be a real winner.

So was it coincidental or serendipitous that not long after my discussion with Aaron, I got an email from a fellow named Rob Pulcipher asking if I’d like to receive a review copy of his new book Dirt Road Washtenaw: Biking the Back Roads.

Yes, I would like a copy, I told him in my return email.

Book now in hand, I see that Rob lines out 17 routes for mountain and cyclocross bikers, most of them totally or nearly devoid of pavement, and carrying very little vehicular traffic. They range in length from 14 to 46 miles. In the introduction, Rob writes: “I once wondered why southern Michigan, and Washtenaw County in particular, had so many dirt roads. I even thought of them, condescendingly, as routes to be avoided. My opinion has changed. Wandering these roads has brought me hours of joy. The beauty along many of them is as good as you’ll find anywhere in the state. And they’re relatively quiet. Development, on the whole, is minimal, which yields a unique window into our past.”

Now consider that the seat of Washtenaw County is Ann Arbor, the sixth-largest city in the Wolverine State, home to the University of Michigan, and situated only 35 miles west of Detroit. If the riding is beautiful and relatively free of development there, think how untamed certain areas of Michigan’s Upper Peninsula must be and likewise, places in the northwoods of Wisconsin and Minnesota.

So the idea has been put forth. Let us know what you think of it and feel free to pitch in if you know of any particularly good bikepacking routes in the upper Midwest — or anywhere else, for that matter.

By the way, Adventure Cycling does offer at least one additional great bikepacking loop in the form of the 287-mile Utah Cliffs Loop. I wrote about that route here at the blog in May 2010.

Choose one of these singletrack heavy routes and people will love you....

Great comments and suggestions, folks, thanks a lot. We'll keep you posted.

There is a vast network of gravel roads within about 2 hours bike ride from Portland OR. I'm hoping to get out with some friends this summer and do some exploration. A friend's dad recently toured from here to Mexico along the Cascades/Sierras almost entirely on dirt/gravel roads.

I think it would be great if there were more dirt routes. I'd especially be interested in one along the sierras here in California.

Within a short driving distance from Minneapolis/St. Paul, there are miles and miles of gravel and dirt roads begging to be ridden.

A crew from Hiawatha Cyclery has established an almost entirely gravel route around Lake Pepin, along the Mississippi River. It involves some short but epic climbs, beautiful scenery and best of all -- mostly traffic free riding.

As J. Meiser indicates, the number of riders looking for alternatives to riding the pavement is exploding, particularly here in the midwest.

I'd be happy to help scout some of those back roads routes in WI, MN, IA, and MI. There is already a budding scene of gravel road events happening in the upper midwest that just keeps on growing. There are a few key people that if involved would develop great things.

I think ACA had better get on the ball and address the growing number of riders who want to explore country void of cars, improved roads, and perhaps even other people. The divide is a monumental effort and it is time to add more routes like it.

One thing I have learned on my big round the US tour this year is that I LOVE going off road. I've always been a road cyclist/ commuter, but on my journey this year had a couple of great off road stretches that were a joy to ride.

NOTE: These were canal path/train grades and not nealry as strenuous as the mountain bike routes, I rode them on a Novara Randonee with 700x32 touring tires without trouble, but they were a great experience - both in terms of scenery and car free travel.

The first was the Hennepin and I&M trails which run nearly 120 miles from Moline to Joliet Illinois. There were very few cyclists on this path until I got close to Chicago, Most of it was roughly maintained towpath, though a few places turned into singletrack better suited for a cyclocross bike. There was ample camping along the entire trail which passed through several small towns perfect for picking up supplies of my main source of sustenance - the five dollar footlong from Subway.

The second trail set - one of my favorite rides of the year so far - was the 350 mile stretch of the GAP and C&O trails the run from Pittsburgh to downtown Washington DC. The GAP/C&O stretch features dozens of towns with affordable prices, free camping with water, fire rings, and port-a-johns right off the trail - many with beautiful views of the Potomac, friendly people, and a 4000 foot long tunnel -with no lights in it! While the riding was certainly not challenging it was one of my favorite rides because of the scenery the diversity of people, and again, the car free travel.

I would love to see more off road routes established in the future. One of the reasons for riding a bike is to go places where cars can't go. Trails whether groomed or left rough are a great option for the long distance cyclist to see parts of the country that we would otherwise miss out on.