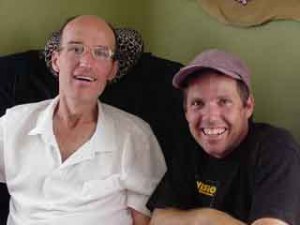 As much as I love bicycles and cycling, it is the connections with people on my travels that I treasure most.

In 2001 Kat and I cycled through the Deep South. Our 2,000 mile journey aired as commentaries on public radio station KUOW in Seattle. The commentaries were written in the form of letters to my friend Bob Nadir.

I'd known Bob for many years. We shared a love for theater, running, and really, really hot Thai soup. In 1998 Bob contracted ALS (Lou Gehrig's disease). When Bob's condition reached the point that he could no longer turn the pages in the books he was reading, I offered to come by his house and read for him.

I have often kept my travel journals in the form of letters written to my brother. For this journey, I asked Bob if I could write to him. Days before we left I asked Bob if he would mind if I shared those letters with the listeners of KUOW.

Bob and I read thirteen books together before ALS ended his life. I have traveled all over the world, but I have never come close to exhibiting the courage and compassion of Bob Nadir. Robert Jamieson of the Seattle Post-Intelligencer wrote three columns about Bob. They are a touching tribute to an amazing man.

Win Puts M's Closer to Wish of a Special Fan

A Passion For Life is Celebrated in Death

Who's Vera: What does the Southeastern United States have in common with a Ford Taurus?