In last year's December/January issue of Adventure Cyclist, I wrote a bit about David Byrne's book Bicycle Diaries ("Byrne's a Writer — and a Rider"). It was a brief overview of the book and I mentioned that Byrne has been an avid transportation cyclist since his early days in New York City and that he's taken a bicycle just about everywhere with him when he's traveled around the globe. But he doesn't just take them with him, he actually rides in these places. And when he rides, he thinks — about a lot of things. 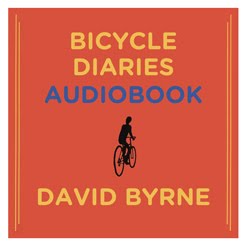 This is the first audio book I've ever listened to and, even after reading the book over a year ago, I found the audio version fascinating. The difference between reading words and listening to words is substantial. When reading, you can't help but assign your own voice to the words and this action in itself influences how you comprehend what you're reading. When you listen to an audio book, the voice is already supplied, and when the voice is that of the author himself, you're listening to their thoughts as if you were having a one-sided conversation. And for this reason, and the included background music, I found the audio book version of Bicycle Diaries more enjoyable than the written version. (A couple of other benefits are that you can do other things while listening, which, in my case, prevents dozing.)

To be clear, Bicycle Diaries isn't really a book about bicycling. It's a book about many issues and subjects that affect the way human beings interact in physical settings, particularly cities. That's not to say it's devoid of specific cycling thoughts but these are most prevalent in Chapter One: Introduction and Chapter Two: American Cities. It seems that, for Byrne, the Steve Jobs quote that “… the computer is the equivalent of a bicycle for our minds,” couldn’t be more appropriate. You can just see him toodling around all of theses cities on his bicycle and thinking … hard, meanwhile I kept thinking, “Watch out for that pothole Dave!”

The other chapters cover the cities of Berlin, Istanbul, Buenos Aires, Manila, Sydney, London, San Francisco, New York, and include an epilogue. Some of the of the topics, amongst a myriad, that Byrne hits on are culture, politics, art, music, history, religion, transportation, architecture, philosophy and economics, although not necessarily in that order. He even manages to weave in one of the most chilling comments made by Adolf Hitler, as asserted by his secretary Traudl Junge: “In order to make an omelette, you first have to break a few eggs.” (Did it just get really cold in here?)

During the Istanbul chapter, Byrne seems bemused with himself as he states, “A million thoughts run through my head as I sing.” Thanks goodness he doesn’t try to share them all!

A thread that kept running through my head as I listened: "Someday, humanity will look back on late 20th/early 21st century cities with a strange fascination. They’ll shake their heads and wonder, 'How the hell did they live like that?' I guess we’re in transition (aren’t we always?), and these periods are usually ugly, nasty and dirty, as traditionalists and the powerful fight progress tooth and nail to maintain their advantages. Regardless, unless the topic of human overpopulation is addressed, not much that’s being discussed will matter.”

But it's not all gloom and doom by any stretch, there's quite a bit of good natured banter. On the whole, I found this listening experience to be enjoyable, despite the fact that at times it seems Byrne is simply reading from the book (although at other times the passion and intensity for the subjects discussed is clearly conveyed in his voice.) He asks a lot of questions but doesn’t offer any answers, which is good, because the questions are meant to make the listener think, not be told what to think. I’m glad for this because I get enough of being told what to think from any assortment of American media and political outlets.

Warning: If you don’t like the occasional cuss word, are somewhat of a closed-minded person, think the George W. Bush administration was good for America and the world, are a bit of a puritanical prude, or aren’t much interested in non-American subjects, Bicycle Diaries might not be for you. After all, David Byrne was a key member or the Talking Heads, not The Carpenters.