Membership Director Julie Huck shared this piece of correspondence from a renewal notice with me:

"As you may know we provide a camping area for bicyclists traveling across country. You have our information on your maps. We have about 70 campers every year."

The writer was Jim Gregg from Barn Bicycle Camping located in the Methow Valley of Washington State on our Northern Tier, Sierra Cascades and Washington Parks routes. 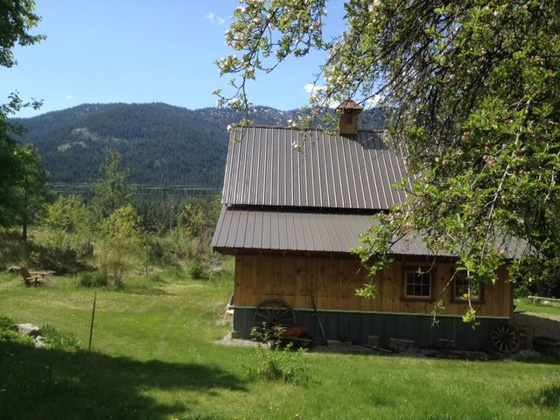 A wide, grassy expanse serves as a base for campers at Barn Bicycle Camping.

Barn Bicycle Camping falls into the category of Cyclists Only Camping — a type of service listing you'll find nowhere else. Popular locations for this kind of service include the long established Community Center in Monroeville, Indiana, the Cycle Camp in Twin Bridges, Montana and Bicycle Bunkhouse in Dalbo, Minnesota. 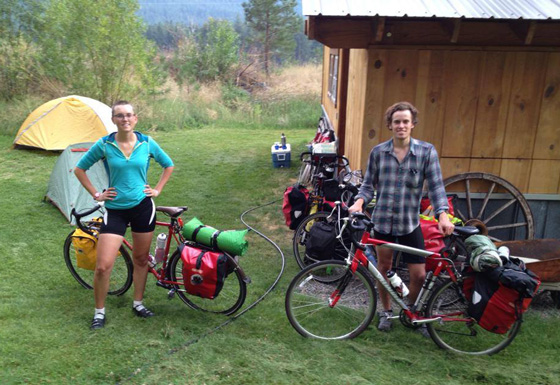 Nora and Joe settled in for the night en route to Yellowstone National Park.

Jim, and his wife Jan, are bicycle travelers themselves and opened Barn Bicycling Camping in 2008 as an experiment. Jim and Jan are supported by their dog, Stout, who is learning to be the camp host. In further conversation with Jim, he revealed the key to Stout's training, "When cyclists arrive he hears them say the word 'camper' — campers are instructed to say the word via a posted sign — he then goes and greets them and leads them to the camping area." Brilliant!

However, this can have some challenges for Stout, too, keeping him on his toes. "The first time we tried it the camper was from Australia and Stout just looked at him because he could not understand his accent. With another camper, I found Stout in the driveway barking madly. Turned out the camper had a 30 pound pitbull strapped in his trailer. Stout and the pitbull got along fine once they met each other!" Jim recounted. 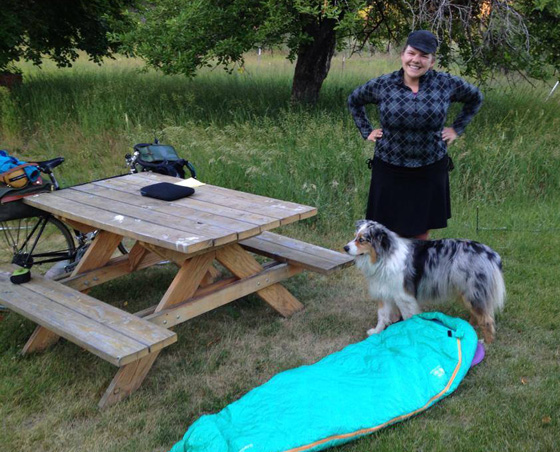 Stout in action as camp host showing Ally the best spot to lay out her sleeping gear.

They request a $10 donation to help defray their costs, 20% is also set aside to support an annual bicycle cause or individual. In 2014 they have selected Adventure Cycling as the recipient of this donation. Last year the donation went to the widow of a cyclist killed in an accident. 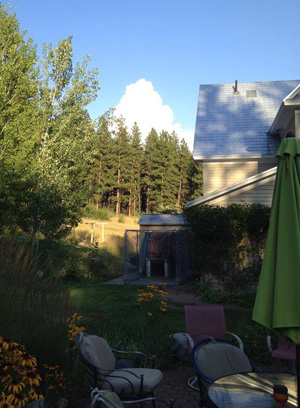 Smoke plumes from the 2,500+ acre Carlton Complex Fire as viewed from the property.

On July 14, 2014, a fire was sparked by lightning in the area. This incident known as the Carlton Complex Fire become one of the biggest of the 2014 fire season. Though they could see, smell, and taste smoke, their property was uneffected beyond power outages. Throughout the fire, they continued to support the traveling cyclists who made it through the multiple road closures. 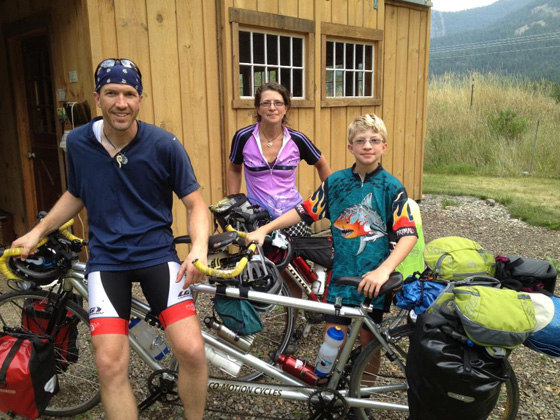 Keith, Anita, and Taylor arrived at camp via Whitefish, Montana.

You can follow the activities at the Barn Bicycle Camping and see the happy campers they are hosting on their blog and Facebook page. Based on all the photos I saw, I find it quite easy to believe the Facebook post that said, "Nothing finer than a welcome by the Gregg family after a long day of biking!"

If you encounter a cyclists-only camping or lodging loction that is not listed on our map or addenda, tell them to call 800-755-2453 and ask for Routes & Mapping or fill out an online Map Correction Form. We love being able to add facilities to our maps that have been designed with traveling cyclists in mind.

Wow, hosting 70 riders per year, sounds like fun. As members of warm showers we've hosted a few folks but as we are located south of the southern tier near the coast we don't have as many ACA folks stopping by. Glad I found this post, beautiful country there. Enjoy.