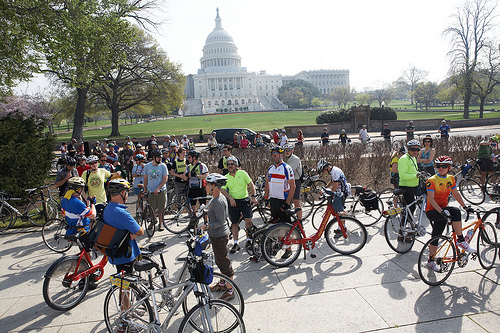 This is the second in a series of guest blog posts written by Zach O'Connor of the American Association of State Highway and Transportation Officials (AASHTO), the organization that provides standards and guidance for state and local transportation agencies. AASHTO is responsible for cataloging and numbering U.S. highways, interstates and U.S. Bicycle Routes. We asked AASHTO to tell us why they support the National Bike Summit taking place in Washington, DC this week.

AASHTO is proud to be among the many supporters of the 2013 National Bike Summit. This week, the premiere advocacy event for cycling brings more than 800 enthusiasts of all types to the nation's capital. If you haven’t participated in the National Bike Summit before, I highly recommend you do. The summit provides a solid voice for bike advocates and their allies, as well as a space for seminars on advocacy and the benefits of cycling. I'm sure you already know the health and economic benefits of cycling, and AASHTO does too.

AASHTO's continued support for cycling is more than words and talking points. We support all modes of transportation, and understand the need for a safe and robust bike system. The AASHTO Bike Guide was updated last year to provide up-to-date standards and information for state DOTs while they respond to the growing need for bicycle infrastructure. Methods and standard practices are always evolving, and we will be sure our Bike Guide evolves as well.

In fact, Secretary Ray LaHood announced last week that the AASHTO Bike Guide will be a starting point for helping establish standards for the modern roadway, standards that are expected to consider all users of the roadway. AASHTO is also a supporter of the U.S. Bike Route System, which will revolutionize the way we think about bicycle travel in the United States while creating a system for cyclists across the country.

We will continue to sponsor the National Bike Summit because AASHTO believes in all modes of transportation, and that a multi-modal system is necessary for success in the future.

Zach O'Connor is the Communications Coordinator at AASHTO. A graduate of American University, he is a proud self-proclaimed transportation nerd. You can follow AASHTO on Twitter @aashtospeaks or on Facebook at facebook.com/aashtospeaks.

Photo by Chris Eichler of the League of American Bicyclists

BUILDING THE U.S. BICYCLE ROUTE SYSTEM (USBRS) is posted by Ginny Sullivan, USBRS coordinator at Adventure Cycling, and features news and updates related to the emerging  U.S. Bicycle Route System. The USBRS project is a collaborative effort, spearheaded by a task force under the auspices of the  American Association of State Highway and Transportation Officials (AASHTO). Members of the task force include officials and staff from state DOTs, the Federal Highway Administration, and nonprofits like the  East Coast Greenway Alliance, and  Mississippi River Trail, Inc.

Does a poster exist with the USBRS graphic which appears on the website (lone rider on road with map of US in sky field above? If so, are they available for sale? I am interested in distributing to friends and local sport and cycling businesses.