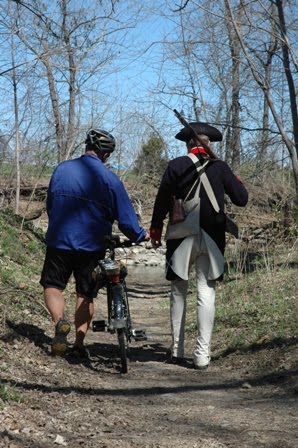 In 1781, at the height of the American Revolution, allied French General Rochambeau marched his Army from Newport, Rhode Island, through Connecticut and into Phillipsburg, New York, where he met up with George Washington and the Continental Army. Together, they marched across New York, New Jersey, Pennsylvania, Delaware, the Washington DC area, Maryland, and into Virginia--specifically to Yorktown, where they defeated the British Army and General Lord Cornwallis in the Battle of Yorktown.

Two years later, the War for Liberty was over.

In 2009, Washington’s and Rochambeau’s original route was designated a National Historic Trail by the National Park Service. It is called the Washington-Rochambeau Revolutionary Route, aka "W3R."

I first learned of the W3R in September 2010, 229 years after the historic march, while I was having coffee with neighbor, Dave Fagerberg. Dave is an 18th century reenactor who will be walking the full 600+ mile, nine-state route on its 230th anniversary. He, along with two others, will wear 1781 period clothing as they walk the route this summer.

In our first meeting, Dave explained the historical significance of the W3R. He then asked me if I would be interested in walking all or part of route with them. I told Dave I was not interested in walking the route, but asked him if there was a bicycle route for this National Historic Trail. He said there was no through bike route; the trail, although well marked, is very diverse and follows all sorts of roads, including sections of major highways--which, Dave said, are “far too dangerous for someone on a bicycle.”

I then asked Dave if he thought a bike route was needed. "Yes," he said, adding that he thought the National Park Service would be interested in a bike route to promote use of the W3R.

Dave was right, and a revolutionary idea was born. 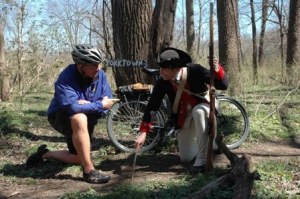 I contacted the Park Service's Joe DiBello, superintendent of the W3R-National Historic Trail (W3R NHT). Joe was excited to speak to me about my idea of mapping out a safe bike route for future users of the trail. “This is great, and in line with what the NPS would like to see more of," he said; "people cycling in the national parks and on the National Park System of trails. With the high cost of gas, and traffic congestion, bicycling is a great alternative way for people to see our parks.” Joe himself regularly commutes by bicycle to his NPS office in Philadelphia.

The upshot: On July 1, 2011, I am leading a small cycling expedition on the W3R. Our missions are to 1)find and map a safe bike route for future users of the W3R; 2)promote cycling for transportation and travel; 3)share how individuals, the environment, and communities can benefit when people bike for travel and transportation; and 4)commemorate the sacrifices made by the soldiers and civilians of the American Revolution so that future generations could have the freedom and liberty we now enjoy, but sometimes take for granted.

Beginning the expedition on the island of Martha’s Vineyard, we will take a ship to Newport, Rhode Island, then bicycle up to Providence and onward to Connecticut. After crossing Connecticut, we'll head to Phillipsburg, New York, where we plan to meet up with Dave and the small band of reenactors known as The Marchers. Then we'll roll across the Hudson into New Jersey, continuing on into Pennsylvania. In Philadelphia, we'll meet up with Superintendent DiBello, who will ride with us for a ways. Delaware is next, then Maryland, Washington DC, and, finally, south into Virginia to Yorktown via Williamsburg.

While following the W3R we will visit original 1781 campsites, and meet with historic associations that maintain the W3R. We'll also ride with local cyclists to enhance our understanding the areas the W3R is located in, and to learn about alternative routes that may be more practical and/or safer for cycling. This expedition is not supported, so most nights we will camp, but we'll occasionally bed down in private homes if they are offered.

Though this is my first trip of this sort, I live a car-free lifestyle and have pedaled more than 60,000 miles in the past ten years for transportation, exercise, day trips, and S24Os. I am very excited. Unlike some of my Adventure Cycling friends who go to exotic places around the globe, I will be exploring one of the most densely populated regions of the U.S. to identify a safe bike route tracing a National Historic Trail. There's an element of fear, but that's okay; I understand fear and embrace the feeling it invokes, and look forward to the expedition as the Revolutionary past comes alive and folds into the uncertain present.

You can follow along with the Cycling W3R Expedition. We are documenting the expedition and will be blogging about it before, during, and after, using Facebook and Twitter for real-time updates for our followers.

The past meet the present, as Bill and Dave sample the route. Photos and map courtesy of Bill Poindexter.

Bill Poindexter lives car-free in Prairie Village, Kansas, a suburb of Kansas City where he is an executive recruiter, alternative transportation advocate, blogger and writer, youth lacrosse coach, and animal rights advocate. Bill writes the popular blog www.carfreeamerican.com, where he promotes the benefits of living car-free or car-lite, and profiles others who live similar lifestyles. He plans to write the Cycling the W3R Guide once the expedition is finished. He's also pitching the expedition to PBS for a documentary.