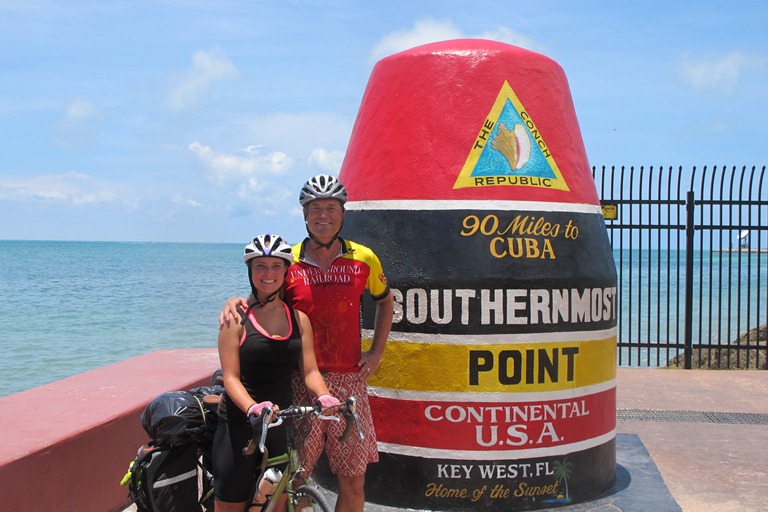 My 14-year old daughter Lucy and I just completed an epic self-contained bike trip from Charleston, South Carolina, to Key West, Florida. Having never cycled in the south, I was wide open to the experience — and it did not disappoint. I came away enthused about the riding, especially on the coast, and the communities we passed through.

Altogether, we did 1,062 miles over 19 days. The first part was actually Adventure Cycling’s new Southern Sampler tour, from Charleston to St. Augustine, FL., which we did with eight other hardy (and fun) souls. The second part was from St. Augustine to Key West. Here’s a “top ten” list from our experiences riding down south. Y'all come along now, hear? 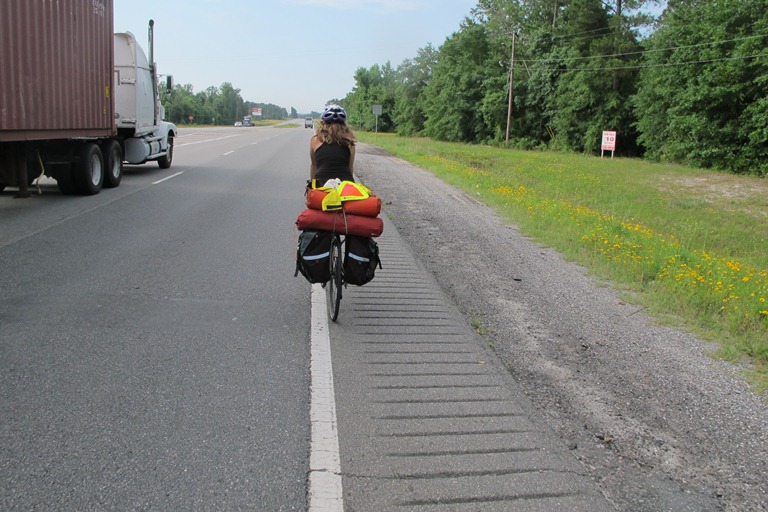 1. Bad Roads: We were able to ride some pleasant country roads in Georgia and South Carolina, and the bike lanes and other facilities in coastal Florida were generally first-rate. But in the first two states, we also had to endure some awful highways (there was no other way) with little or no shoulder and often rumble strips from hell (see the Georgia example above), which forced you into the travel lane. As part of our ongoing campaign for better bike travel conditions, we'll be contacting the Georgia and South Carolina departments of transportation to urge them to do a better job accommodating cyclists.

2. Good Drivers: For all the bad roads, we were astounded by the awesome drivers in Georgia and South Carolina, who invariably gave us wide berth — as much as a full lane! Even the logging trucks would play chicken with oncoming traffic to give us enough room. Amazing — have any of you had similar experiences in the South? 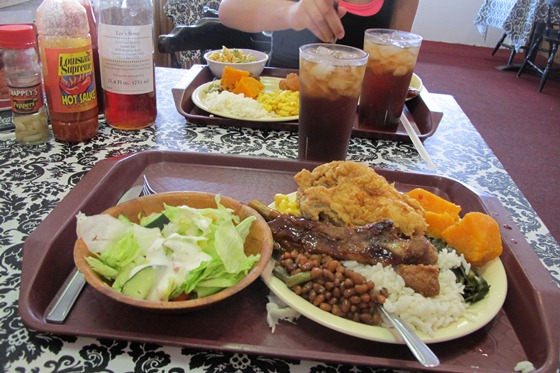 3. Good Bad Food: Oh man, what can I say? I try to eat healthy at home. But on this trip, I gave in to a deep-fried, high-fat diet that I rationalized with my many-mile, heavy-load, self-contained riding. Most tempting of all was Krispy Brown, a soul food place we chanced upon in Reidsville, GA — an $8 all-you-can eat buffet (less for seniors!) — so bad for me, it was great. After two plates of it for lunch, I even got my cycling friends to come back for dinner. There was more: Angels BBQ in Savannah, Nippy's Fried Seafood in Beaufort, SC, Dave's (Fried) Seafood Take-Out or Martha Lou's Kitchen in Charleston ... OK, I'll shut up. 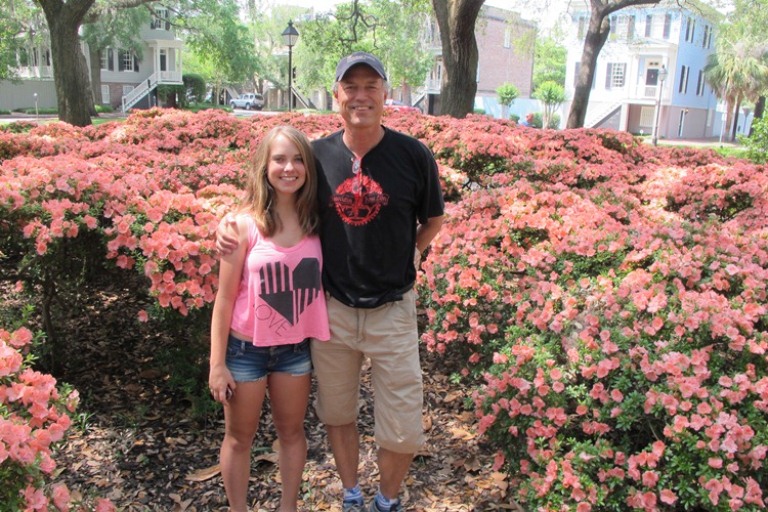 4. Great Towns: There are few things in life as lovely as the old heart of a Southern town. Lucy and I were especially taken with the squares, parks, and boulevards of Savannah, but we enjoyed so many of these gracious towns, with their sinuous oaks, colorful gardens and walkways, and fantastic architecture. 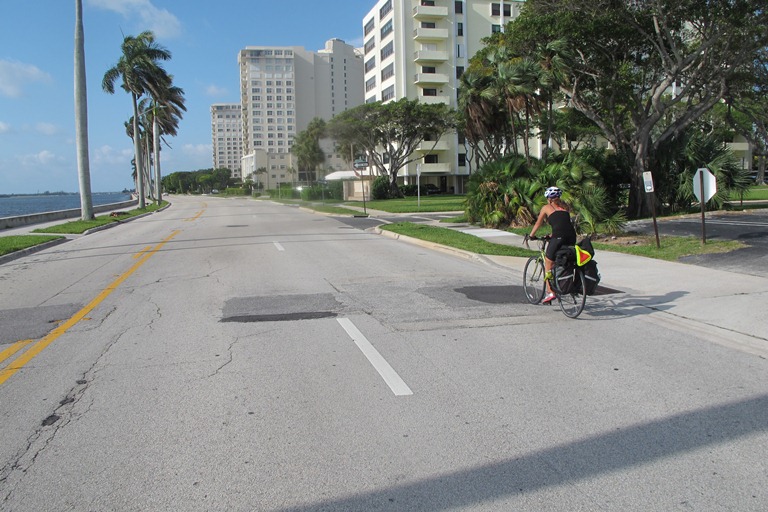 5. Disappearing Snowbirds: We didn't realize it at the time, but we picked one of the very best times to ride in Florida: just before the stifling heat of summer, before the bugs, and especially after the disappearance of "snowbirds," the folks who live in Florida for winter and spring, and gravitate back to the north for summer. We discovered they all leave en masse following easter, and it meant a drop in traffic volumes of 60-70 percent. Check out the photo above. That's Lucy riding on a waterfront arterial through busy West Palm Beach mid-morning, nary a car in sight! There were still enough cars and trucks, but overall it was a terrific time to ride.

6. Simmering Swamps: For a mountain boy from the arid West, swamps are exotic. And southern swamps are really exotic. We saw lots of black water, old cypress, gators, and waterfowl, from wood storks to hawks to ibis. One of our favorite side-trips was a ride through the majestic Okefenokee Swamp (by motor boat, we didn't see any pedal boats). Make sure to check it out, and kayak if you can.

7. Flat Ain’t So Bad! For a mountain boy used to lots of ups-and-downs, I thought flat terrain would be boring. But I was wrong, most of all when I was hauling 60 pounds of gear as many as 109 miles in a day. Shamefully, Lucy and I even started to whine a little bit about the only topography around, those drawbridges over the Intercoastal Waterway. Anyways, I stand (or cycle) corrected. Sometimes, flat is where it's at! 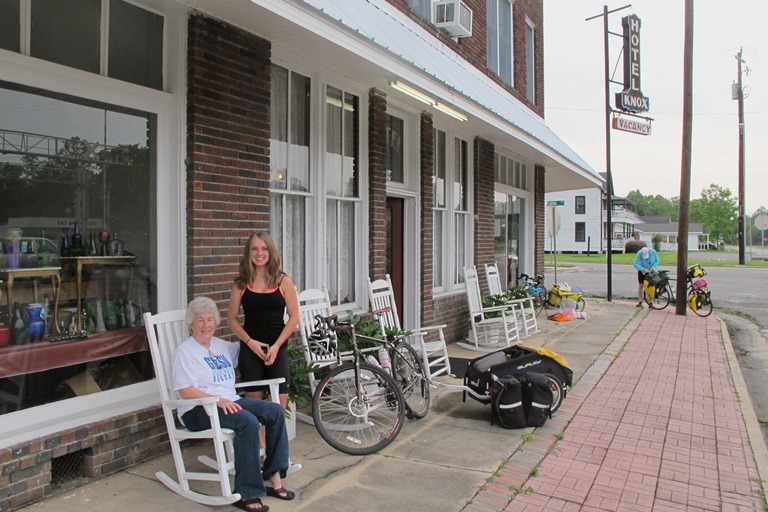 8. Southern Hospitality: Yep, it'a cliche, but oh so true. People were friendly and inquisitive (and astounded) about our journey. And when we got hit by adverse conditions, they jumped to our aid, especially Blanche, the 75-year old proprietor of the Knox Hotel in Nahunta, GA. During a massive thunderstorm, she helped us open up a room behind her husband's barber shop, so we could have a place to cook, dine, and get organized. She did laundry for us (we didn't ask, she just did it), served us some nice treats, and made us feel so good about ourselves and her humble little town. Head to Nahunta (and Blanche, pictured above with Lucy) if you want to feel that way, too. 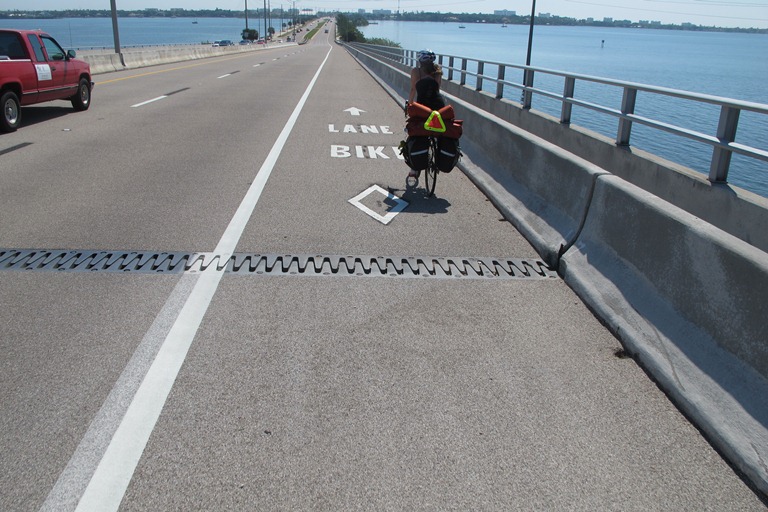 9. Southern Advocacy: Decades ago, Florida was derided as a generally dangerous place to ride. No longer (though it still has its danger spots). Advocacy and investment have produced some stellar places to ride on the coast, like Amelia Island near Jacksonville, with lots of bike lanes and other facilities. The intercoastal bridge pictured above in Melbourne, FL had 11 foot wide bike lanes! And there's hope for Georgia and South Carolina too. We had two Adventure Cycling member gatherings in Charleston and Savannah, and learned about all the good projects under way, thanks to groups like Charleston Moves and Savannah Bicycle Campaign. 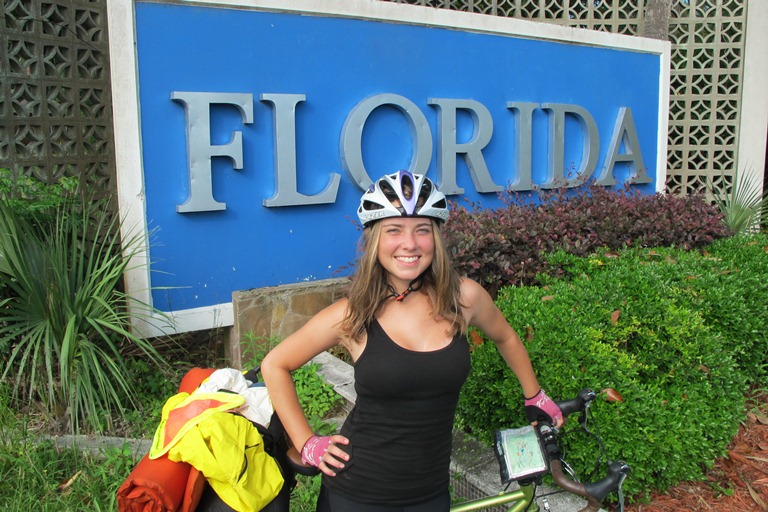 10. Southern Surprise: I have always been curious about the South, but the real reason I did this ride was Lucy's desire to experience Florida. So we built the ride around her passion, and less around my enthusiasm. But here's the rub: I came away really enjoying the South and all its pleasures. I am a native westerner and will probably always remain out West, but I now know there is another place full of cycling surprise and delight, from Hunting Island in South Carolina to the relaxing Coconut Palm Inn on Key Largo. Don't be surprised to see me pedaling back down South. 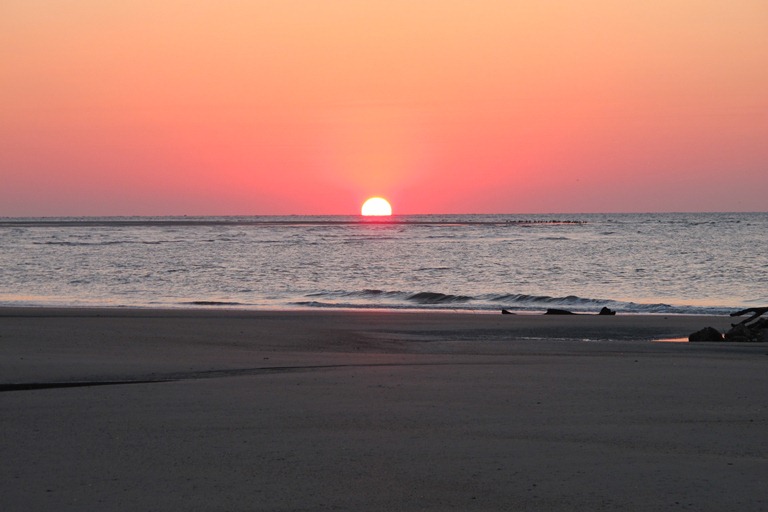 I am so glad you came through our small southern town and had the opportunity to meet two of our local citizens and be a part of our local hitory at the Knox Hotel. Also glad that you got the assistance that you needed at the time of the thunderstorm.

How easy was it to find a place off the highway to camp out? I guess I should also say, legally. I am considering finding a way to travel and camp when needed and not be a bother. I am thinking south/middle Georgia and Florida.

Reading through this after Natalie linked to it from BTD...what a fun trip! I loved reading about the adventure as a Top 10 list.

we live at wrightsville beach, near wilmington, nc, and would welcome any cyclists. hosting is a privilege, the experience of hearing the tale is the prize! safe passage to all.

we live in and ride all of eastern NC, technically wilm. i am so impressed (as a mother of teen girls who do all sports) that your girl did this with you. ya"ll are always welcome here!

Jim, I am interested in cycling the Jacksonville to key west route.

What time of the year did you travel in fla.( dates)

What areas on the trip is best to stay clear of.

I will be traveling alone. Any tips would be helpful.

Thanks for the comments - it was really interesting to me the behavior of drivers -- and the fact that the roads were so open in FL, compared to what Tim describes.

I'm astounded that you cycled over 1000 miles, and especially your daughter. That is a great achievement and what a way to spend 3 weeks.

Debbie and I rode much of ACA's Atlantic Coast tour last summer as part of our "Mom-to-mom" tour from Naples, Florida, to Houlton, Maine. We live in a beautiful country and, as New Englanders, it was great to experience the South from the seat of a bicycle, notwithstanding some of the roads Jim referred to. We felt the most vulnerable on a stretch of route A1A north of Jacksonville, Florida, where four lanes of fast traffic kept our eyes glued to the narrow shoulder and our rear view mirrors, and our hands clenched to our handlebars. It's best to avoid roads like this during rush hour! We were also struck by the distance between services from Georgia through the Carolinas, as the Atlantic Coast tour takes the inland route through much of these areas.

I live in North Florida and when I ride over the border into Georgia I'm always struck by how much friendlier the drivers are. It seems just crossing the state line changes everything. I've wondered if there's a difference in driver education. Of course, South Georgia is very rural, and maybe people are more patient. Things may change around Atlanta.

I grew up in the south and started cycle touring seriously as a student at the University of Georgia. I recall that on our first spring break trip to Savannah Beach we noticed that the logging trucks were slowing down before we could see them. We then realized that they were using the CB radio to warn each other about us. This was 1978, so I picture the message as following: "We've got three crazy bicyclists eastbound at mile marker 24. It looks like they're loaded down with camping gear!"

Over the years I have found that most drivers everywhere are reasonably polite... it's the few jerks that you tend to remember.