Cycling the Length of New Zealand

The idea of cycling the length of New Zealand, a country marked by volcanoes and glaciation, wasn’t actually something I’d ever had ambitions to do — I hadn’t done any long, multi-day cycling trips. Then I stumbled across Craig Harper’s record attempt in late 2016. Craig rode 1,300 miles (2100 km) in four and a half days, slept on the side of the highway, caught a helicopter from the North Island to the South Island, and rode predominately on Highway 1, New Zealand’s main and most dangerous highway.

While Craig’s efforts were impressive, record attempts were never in my contemplation. However, riding the length of New Zealand on the other hand — at a solid but doable pace of roughly 125 miles (200 km) per day over the course of two weeks — became my fascination. 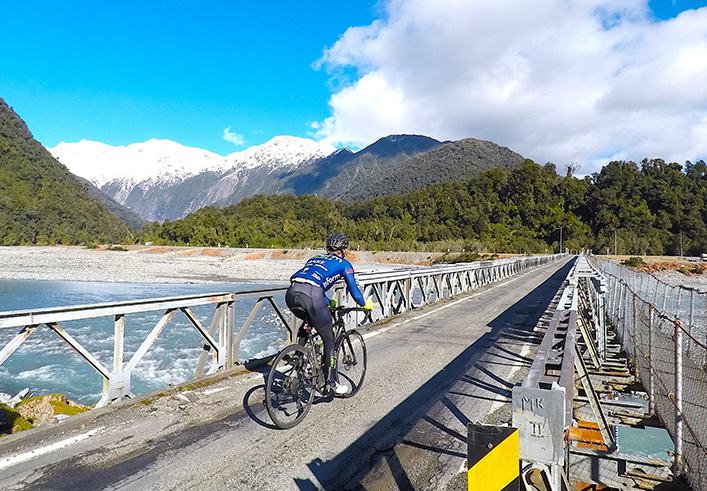 While it has become a little cliché to ride your bike for a cause, the “CanTeen effect” provided motivation over the course of my 13-day journey and proved more profound than I could have ever imagined.

A young cousin of mine, Lachy, was going through treatment for a blood cancer called Hodgkin’s Lymphoma. It was a real shock to the family when Lachy was diagnosed earlier in the year at the young age of 13.

Lachy was just coming out of what became a successful treatment, and the signs were positive that he would recover at that point in time. During his treatment, CanTeen New Zealand, an organization focused on supporting young people living with cancer, supported Lachy and the entire family in their time of need.

One of the earliest signs of cancer is changes in the body like lumps and bumps. For teenagers, they may not feel comfortable talking with their parents about changes like this. My ride was about raising awareness and inspiring youth to feel safer opening a conversation up if they notice unexpected changes. Catching these things early vastly improves the likelihood of effective treatment, as in the case of my Kiwi cousin, Lachy.

With permission from Lachy’s mother, I approached CanTeen about my upcoming journey, and from there, my successful fundraiser was born.

Here’s a snippet from my social post on day four of my journey:

I rode all day through rain, hail, and a thunderstorm. My knee was throbbing — I couldn’t get out of the saddle at all today, but I found ways to manage the pain through the pedal stoke rotation, while seated. My day however, was easier in comparison to those young people out there dealing with cancer.

The full story of my 13-day adventure in New Zealand isn’t complete without explaining my discovery of survival mode.

As mentioned above, I’d never really done any adventure cycling before this trip and this scenario was a little unique, as I was doing it with my wife, motel hopping for 13 days. I would see Alice drive past me late in the morning, and we’d try to have lunch together. So, this was a little different from packing all your gear on a bike and taking off, but this was originally a planned husband and wife romantic getaway! Read the full story for the details on that! 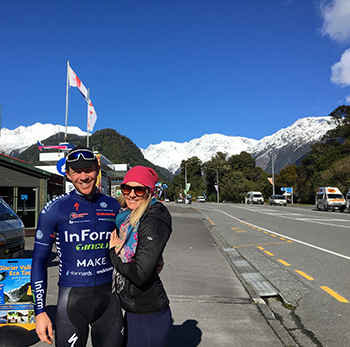 I was very naïve and underprepared for what I was really about to encounter. Having said that, day one had gone exactly as planned. I started and finished the ride within daylight, had no unplanned stops, and rolled into the first destination in time to have a shower, get dressed, and go out for dinner with my wife.

Day one may have put me into a false sense of security because day two was the polar opposite.

Let me paint a little picture for you. It was late in the afternoon on a day of flat tire misfortune. At roughly 4:00 PM, with just over 125 miles in the legs, I had two mobile phones on me (one with an Aussie number and the other with a New Zealand number). Unfortunately, they’d both died due to accidentally leaving the phones on the energy-sucking hotspot mode hours prior.

I’d gone off course in an attempt to avoid the logging trucks on Highway 1, but somehow missed a turn. The map feature on my bike computer was taking me to Auckland, my day’s destination, in a very unorthodox way.

I found myself on a gravel road in farming territory, hungry like never before, and I hadn’t packed enough food and hadn’t seen a shop or anything for roughly three hours. I started to look for fruit trees on the rural properties I passed, but nothing edible appeared. Farm dogs were barking in the distance and the sun slowly disappeared.

I was lost and just as the sun completely disappeared, a dog popped out through a hole in a fence and charged straight for me as I climbed a steep country road.

I yelled and kicked and managed to scare the dog away, but my cycling shoe remained cleated during an attempt to kick outwards. This left me with a severe twinge in my left leg, which would turn into a ligament injury I would carry for the rest of my journey.

The dog attack flooded my body with adrenaline which disguised my hunger, but only for a while.

With some light still in the sky, I decided to approach a farmhouse — one that was dog free and close to the country road I was riding. I had to find out exactly how long I had to go until the next town in addition to seeing if I could kindly have some food.

I knocked on a door and a lady approached with a strange look on her face. Who is this strange lycra man on my country-house doorstep?

She offered no food despite my gentle request, but I learned that I had 11 miles (18 km) to the next town. I continued in distress.

I rode dark, unfamiliar country roads with cars and trucks flying past. Surprised to see my presence on such roads at that time of the evening, many motorists honked as they passed, heightening my emotions and keeping me on high alert, despite having no energy stores. The roads happened to be incredibly undulating at the time. Given the dark conditions and the cars making their presence felt, I would struggle up each climb and come down each decent with immense caution.

I can’t recall the last time I’ve feared for my life. I was in survival mode. I can’t help but reflect on this epic day as a cultivating moment in my life.

While none of my days reached the fear-for-my-life heights of day two, I had a number of survival mode periods for the remainder of the ride. The cold, winter conditions, the injury, the ice and snow, all made my journey incredibly tough both emotionally and physically.

When I got back to Melbourne and had fully recovered from a serious bout of post-ultra-endurance fatigue, I started searching the Internet for “cycling adventures”. I found a previously unknown world of ultra-endurance cycling athletes who live and breathe their next cross-country adventure.

While I don’t currently have the appetite for the extremities of what I went through over my 13-day New Zealand journey, I’m certainly keen to do something of a similar ilk in the not-too-distant future. Next time though, I would like to go completely solo and pack everything I need onto the bike. That would add an exciting new dimension and perhaps lead to deeper a level of survival mode — a natural instinct we all need to bring back into our lives.

Adventure cycling is my new connection with road cycling.

Cameron Nicholls, @10hourcyclist on Instagram, is a co-founder of Bike Chaser and a passionate amateur cyclist. He shares his insights and ideas on how to get the most out of your cycling performance with less than 10 hours of training per week. Your donation to CanTeen is greatly appreciated. 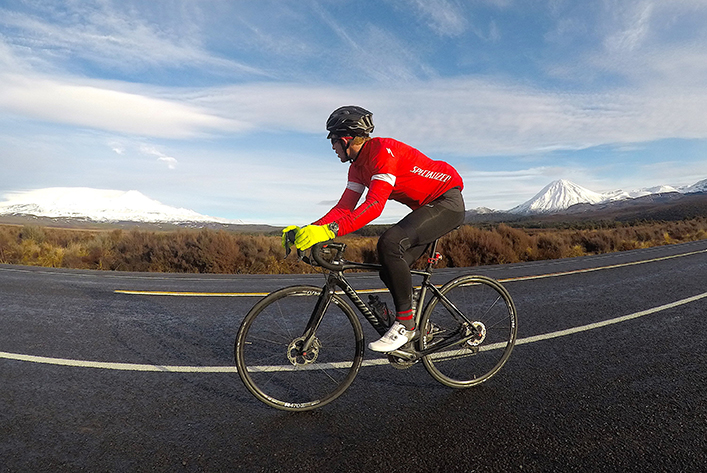