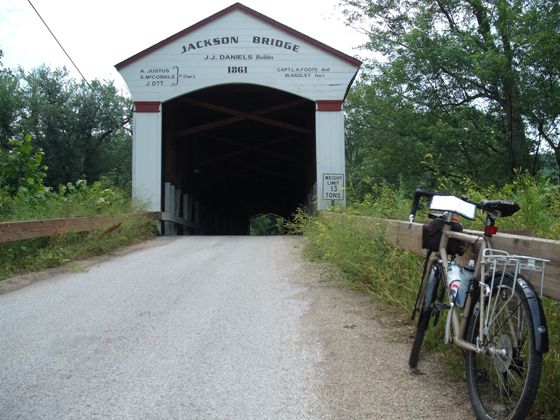 These may be the slow-going days of summer, but they're bringing in some lively stories to BikeOvernights.org. Take, for instance, The Covered Bridges of Sugar Creek, a story about riding in Indiana by Alan Gossard, published on July 22.

"It looks different today ... much different," Alan writes. "This cool water flows by me now on its long, slow amble to the Gulf, first meeting the Wabash River, and then joining up with the Ohio River, and finally the Mississippi. This is Sugar Creek as I see it today, spanning perhaps a couple hundred feet as it nears its confluence with the Wabash, after carrying canoes and kayaks through a couple of state parks and draining 807 square miles of farm fields and other land of excess water. It certainly didn’t look like this yesterday when I left my home in Sugar Creek Township of Clinton County, near the headwaters of Sugar Creek and only one good day’s bike ride to the northeast."

During his journey, Alan encounters a total of five covered bridges, and learns a bit more about his home territory: "As the final day draws to an end and I’m racing the sun home, I make the final crossing of Sugar Creek, only a few miles from my driveway. It’s worth stopping on the bridge and reflecting on the journey for a moment. I don’t suppose many can claim that I’ve been riding through the most beautiful of American countryside. Productive, yes. Drop-dead scenic? Not always, but sometimes. But, it’s home, and following the course of Sugar Creek was both meaningful and enjoyable. I look down now to a stream that I could almost jump across, and I watch the slow-moving water for a moment, water that in a few days will be crossing under the same covered bridge at Turkey Run from which I watched canoeists and tubers floating along." 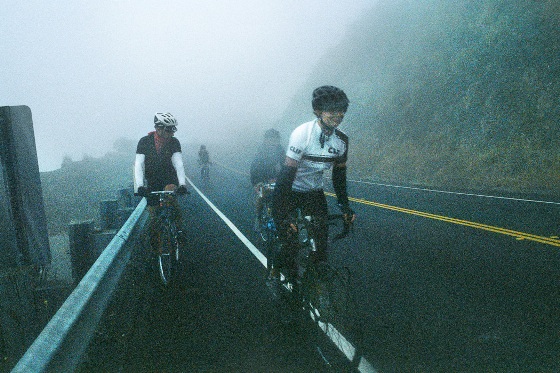 A week later, on July 29, we published Strawberry Moon, a story by Becca Book with images by her boyfriend, photographer Brad Wenner. It had us all California Dreamin'.

"On one particularly warm and sunny Oakland morning we gathered up a group of six friends to strike off across the Golden Gate Bridge toward Bolinas. After passing through the quaint, if overly touristy, town of Sausilito, we met up with the Bay Trail. This ambitious project provides 330 miles of prime cycling paths that loop around the entire San Francisco Bay, mostly separated from roads. We followed just a few miles of the trail, across boardwalks that run through the Bothin Marsh Preserve and into Mill Valley. From there, we followed Marin County Bicycle Route 20 through shady (and less trafficked) neighborhood streets to San Anselmo.

"With six people, four of whom weren’t familiar with the area, there were always reasons to stop for a bathroom break or to wait for someone to catch up. The entire time people were yelling back and forth among our group, trying to guess the name of the small suburbs and little towns we were cycling through. Luckily, there is copious signage on this route, and we followed the well-marked paths that led straight to Gestalt Haus in Fairfax. This little pub has become a favorite watering hole for cyclists to hit before their climb up the north flank of Mt. Tamalpais."

Strawberry Moon, Becca later explains, is a reference to the full moon of June, "because it once informed Indian tribes it was time to harvest strawberries. For us more urban folk, it was a sign that it was time to throw a party and enjoy running through the moonlit countryside without headlamps." 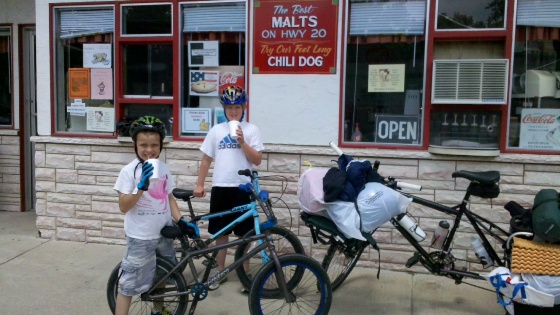 In the July 17 edition of our email newsletter Bike Bits, I wrote this about BikeOvernights.org: "... although we have around 150 tales posted representing a majority of states in the Union (along with a handful of foreign countries), we’re still missing stories from Delaware, Arkansas, South Dakota, Nebraska, and a few other states." Well, that brief mention helped solved the lack of stories: Glen Houts sent in the highly entertaining tale No Better Father's Day: Bicycles and Ice Cream, which posted just yesterday, August 5th.

In opening, Glen writes: "What did I want for Father's day? Only two things (clearly, this dad is a selfish, demanding, and specific kind of guy): Ride my bike, always a given; and go camping. The ten- and eight-year-old sons had been hearing since March that camping at least one night per month April through October was a goal for the year. Between spring 2013’s refusal to let go of its less desirable elements and the boys’ participation in the Great American Pastime, we hadn’t so much as driven a single tent stake. This weekend, however, would not get away."

And it did not. Here's what Glen writes in closing: "Not often does someone get exactly what they want and come away with even more than they expected. I'm counting my blessings as a father right now, and realizing how truly happy all my days should be."