Closing the Book on Volume 42

Adventure Cyclist’s publishing schedule is such that the December/January issue becomes an odd beast. On the one hand, it’s the issue sitting on your coffee table (or, let’s be honest, bathroom shelf) when the New Year arrives. On the other, it’s the final issue of its volume — in this case Volume 42.

Over the past year, we’ve published more than 30 features, 12 Road Tests, and dozens of columns, reader letters, news briefs, Adventure Cycling updates, and more, not to mention nine Open Road Galleries. Looking back over all that content a few pieces rise to the top — I definitely play favorites. 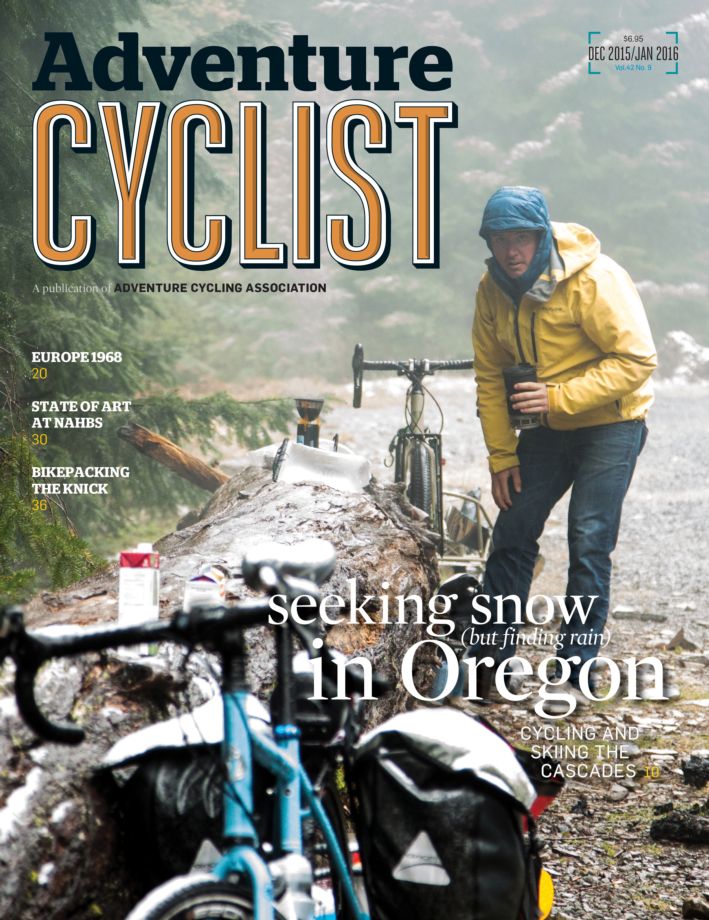 But before I get to those, let’s talk about the December/January issue, Adventure Cyclist’s first-ever 60-page edition. Frequent contributor (and former Adventure Cycling cartographer) Tom Robertson gets the cover with a shot of fellow Missoulian Phil Grove making coffee in the soggy woods of Oregon on an extremely ambitious bike and ski trip from Portland to Bend. It’s a great shot — someone at work called it “gritty” — and captures a unique bicycle touring moment despite the fact that no one’s on a bike. A perfect winter cover in my mind.

The longest feature in the issue — possibly the volume — is Co-Founder Greg Siple’s story of touring Europe by bicycle in 1968. Despite working side-by-side with Greg each day, this story was still a surprise. Accompanied by photos he shot on Kodachrome and a beautiful illustrated map by John Roman, the piece is a classic travelogue with all the drama and successes of a long tour. But it’s also an incredible glimpse into a Europe not all that far removed from the second World War and in the midst bicycle racing’s golden years. That Greg met (and photographed!) some of the most famous riders of all time only makes the story better.

Finally, former Bicycle Times editor Karen Brooks’ dispatch from the North American Handmade Bicycle Show is a fascinating look into the art of custom framebuilding and the folks who both make and buy these works of art. Gorgeous studio-style shots from Brad Quartuccio make the feature sing and have me ready to open my wallet and pay whatever it costs (a lot) for some of these rides.

A short but sweet photo essay from Alaska shooter Dan Bailey adds a mid-winter flair to the issue with some icy-blue shots from a bikepacking trip on the Knik Glacier near Anchorage. There’s an extraordinary amount to see on those four pages and I have high hopes that the format will be the first of many such looks through the lens of talented photographers around the globe.

The December/January issue also marks a distinct visual shift we’re feeling under new Lead Magazine Designer Cassie Nelson. She took the reins from Greg in the middle of the year and has really hit her stride in the latest issue, with great use of images and more modern layouts throughout the magazine. Volume 43 should bring a few more design changes to make Adventure Cyclist even better looking and present our talented contributor’s stories in ever more thoughtful and impactful ways.

But the future is for another day — closing out 2015 and Volume 42 has me looking backwards to my favorite stories and images of the year.

Favorite Piece: (Tie) The Rest of the Story by Joelle Buffa and The Drivetrain Dilemma by Dan D’Ambrosio

A bit unexpectedly, my two favorite pieces of the year are from the same issue, despite the fact that the April issue overall isn’t at the top of my list. I love Final Mile essays and the soundtrack to many memories is the pause-filled cadence of Paul Harvey’s voice. Joelle’s ride and recollection of her father — with the added benefit of some great news clippings — is a great story well-told, and that’s about the best we can ever hope for. Dan’s story, on the other hand, digs into the technical instead of nostalgia and examines a trend that helps explain the gearing spec on many touring bikes today. As road and mountain components continue to advance (and advance they have, they’re truly incredible) the drivetrain compatibility and availability for the needs of a touring cyclist have seemingly decreased. We’ll be tackling this topic again in April 2016, and probably far beyond.

Brendan is an old friend, but I had some concerns when he and his partner Hilary Oliver (who ended up fixing a flat on the October/November cover) headed to Norway for a bike tour. Would it be too “gnarly?” Would the photos be good enough? Would it end up feeling like such an unattainable trip that it wouldn’t resonate? I should have trusted more, because the piece that came back was approachable, funny, and a new angle on a bike trip story. Oh, and beautiful. Big hat tip to Cassie for this one, as the opening spread to this story might be the best-looking opener in Adventure Cyclist. Ever. 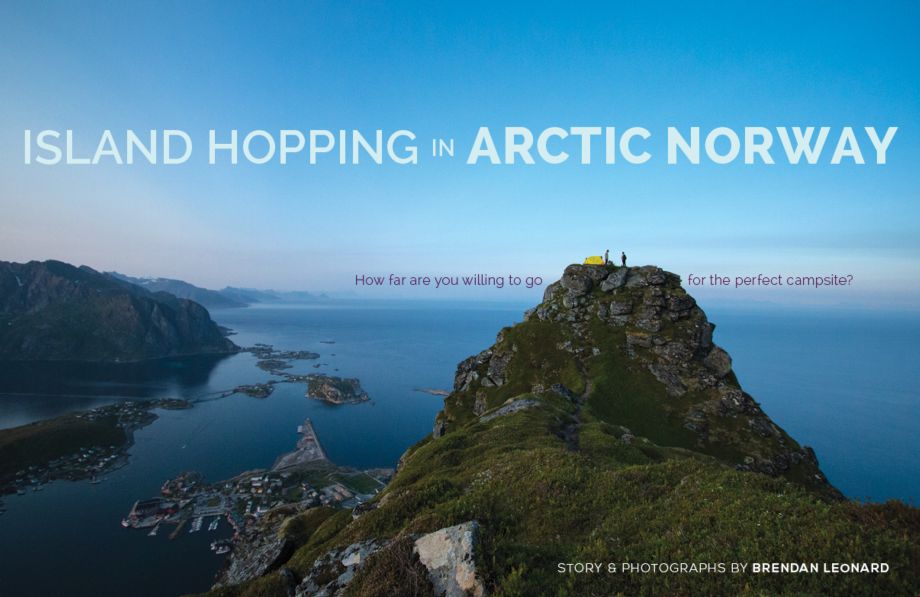 Spread out over two columns and a feature, Willie’s journeys with Zeke Gerwein — from initial out-of-the-blue email to the last leg of a cross-country tour — combine for a tale that unspooled over the course of a year and captured everything great about travel by bike. I’m extremely happy to be running a special Final Mile from Zeke in December and an interview Willie conducted with Zeke’s folks, almost certainly the coolest parents on Earth. 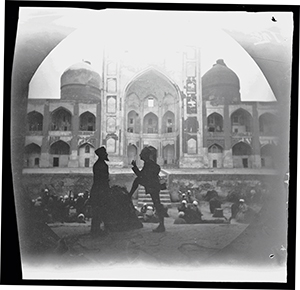 Favorite photo: Madrassa Silhouettes, William Sachtleben (via Bicycling Across Persia and Into the Russian Empire in 1891 by David Herlihy)

Hands down, it’s the photo that William Sachtleben took in 1891 on he and Thomas Allen’s round-the-world ride while passing through Persia. The two men silhoutted against the beautiful middle eastern building, one leaning in and the other standing straight with beard in full profile, grabbed me the first time I saw it and it remains my favorite shot of the year. A runner up here is probably the opener of Chuck Haney's National Parks article in the August/September issue taken just outside of Big Bend National Park.

Can’t say it any better than that. A close second is from Zand Martin’s feature about circumnavigating the Altai Mountains of Central Asia. I love Zand’s literary, sometimes-unusual writing (his Final Mile from 2014 might be my favorite piece from Volume 41) and the opening paragraph from his August/September issue story is a great one: "We stared in amazement at the forces on display and with a shrug laid down our bikes, retrieved a duffel of dry bread and waxy Russian cheese, and sat beside our disappointment." 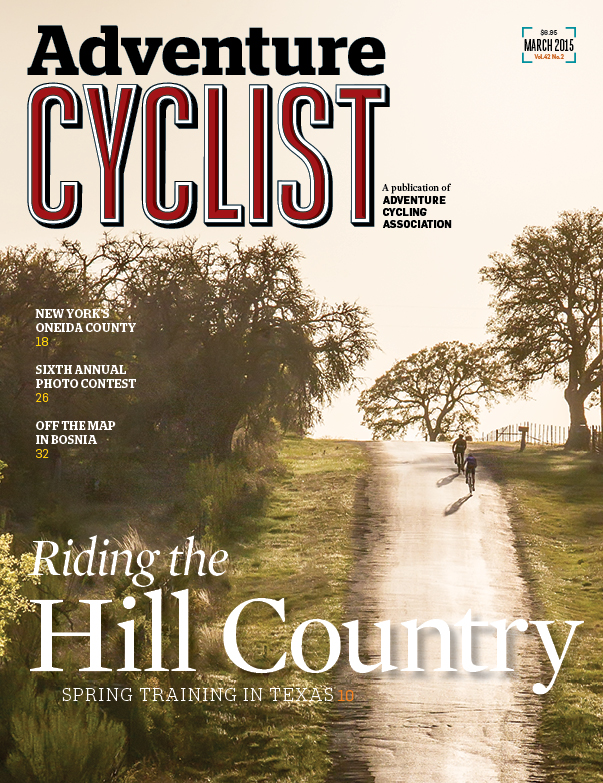 Though some late-coming challengers gave Chuck’s March cover from the Texas Hill Country a run for it’s money, there’s just something about this golden-hour road behind the red Adventure Cyclist logo that I love. Ironically, it was another frame only a click or two of the shutter before, processed as a moody black and white that Chuck loved, saying “I think it is one of my better road bike shots ever.” I was bummed not to use it, but it was too similar to the cover shot to run inside and I couldn’t give up the gorgeous cover.

We’ve got great stuff in the hopper to celebrate our 40th anniversary year in 2016 and having already seen some of it, I’m confident Volume 43 will be even better. Thanks for reading.