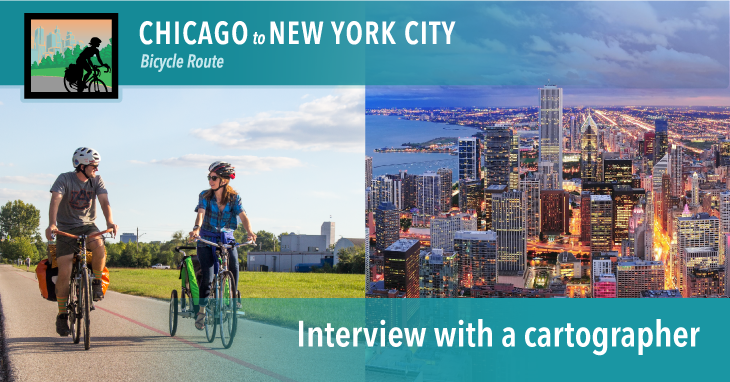 I recently had a chat with Nathan Taylor, Cartographer and Senior GIS Specialist in the Routes & Mapping department, about Adventure Cycling’s newest route, the Chicago to New York City Bicycle Route.

The Chicago to New York City Bicycle Route, in combination with the Philadelphia Alternate, is a study in bicycle travel contrasts. Along the 1,160-mile journey, you’ll pass through towering cities, forested mountains, Midwestern farm fields, historic railroad passages, and flat coastal lowlands punctuated by beach towns. You’ll do so on smoothly paved lake- or riverside bike paths, winding country highways and roads, crushed stone or gravel decommissioned railroad beds, expansive bridges or viaducts, wooden boardwalks, and, in one case, sharing a tunnel with an active railroad! This route, in particular, makes it possible for cyclists to connect several major metropolitan areas of the Midwest and the Eastern Seaboard and the historic corridors of an industry that bound them together.

The Chicago to New York City Bicycle Route fulfills the long-time desire of our members for a New York City to Los Angeles bike route, which is now possible by following this route in tandem with Bicycle Route 66. We began planning this project back in 2012 and were pleased to get major support from our members, especially Howard and Sara Metzenberg. They provided major financial support for route development, and Howard also gave us some excellent route ideas based on his extensive riding experience in the Midwest and Northeast.

How long did it take to make/map the Chicago to New York City Bicycle Route?

Route research occurred during May and June of 2016, and route data processing started in earnest in the fall of that year. Cartography efforts, including integrating route data with other basic map data layers in graphic illustration software, occurred over this past winter. Also during this time, research service data was being processed for entry into our Route Services Database for the creation of map service directories and, later on, the Chicago to New York City GPX data release. By April, map layouts were complete and finishing “style” touches were being made. So there was less than a year turnaround from raw data research to finished product, which strikes me now as pretty unbelievable!

What State or National Parks are on the route?

How many pizza joints are on the route?

Ha! A lot. I don’t know offhand though. We collect very general information for restaurant services; oftentimes not even the name of the establishment or address is being stored in our RSD. You can imagine the overhead if we were trying to find that information for all restaurants in New York City and keep it current for future map updates. So for all service cities/towns in general, we identify if a restaurant exists but then it is up to the cyclist to find it. However, we are much more explicit for a restaurant that is out of town or in rural areas. Also, we don’t categorize the restaurant by the type of food they serve (Italian vs. Mexican, pizza vs. sub shop, etc.), but perhaps it would be worth it for ice cream shops!

Do cyclists need to be experts to ride and enjoy this route?

For any of our bicycle routes, we recommend that cyclists be experienced, 16 years of age or older, and possess a current driver’s license. This route is no different, though it should be advised that this route follows many miles of unpaved surfaces in some remote areas. A cyclist wishing to explore the GAP and C&O trails on the Philadelphia Alternate, and even some shorter rail trails elsewhere on the route, should have adequate provisions, a method for treating water, proper bike repair tools, and maybe a pair of wider tires.

Is it safe for touring cyclists to ride through big cities?

As I don’t live in a big city, I am not an expert on city riding. But in many big cities on this route we have tried to identify separated bike paths or municipal bike routes that will make for safe passage. As always, exceptions exist, and riding defensively in heavy traffic will likely become necessary for short durations. Be prepared and more attentive when entering any city.

A standard touring setup should be fine, although cyclists might entertain the idea of slightly wider and puncture-resistant tires for several areas, especially the Philadelphia Alternate.

The frequent climbs in the steep Allegheny Mountains of Pennsylvania will induce fatigue in any cyclist, although perhaps the largest change of elevation occurs in the five miles between Harriman State Park and the town of Haverstraw, New York, in the Hudson River Valley. Don’t be fooled by the elevation depictions along the GAP of the climb up to the Eastern Continental Divide, as the percent gradient along that trail rarely exceeds three percent.

Depends on what you’re looking for. Want a remote journey through the past on a flat and famous dirt track? That would be the GAP/C&O. Are you a city lover/avid cyclist visiting friends or wanting to survey the latest advancements in multimodal transportation in urban landscapes? The top attraction would be New York City, Philadelphia, Pittsburgh, Columbus, Dayton, Indianapolis, or Chicago. Are you a fan of the more kitschy stuff? The world’s largest basket and also the International Circus Hall of Fame are right off the route in Indiana and Ohio. All good candidates.

Any of the major cities along the route has an international airport, and the route closely parallels Amtrak lines in several states. The Capitol Limited, Piedmont, and Vermonter routes all offer carry-on bike service.

What is the best time of year to ride the Chicago to New York City Bicycle Route?

The route hovers due north of the Mason-Dixon Line and the 45th parallel, so November through March would likely be cold and snowy in parts. Any other time of the year is fair game, but expect heat and humidity in eastern mid-Atlantic states in summer. 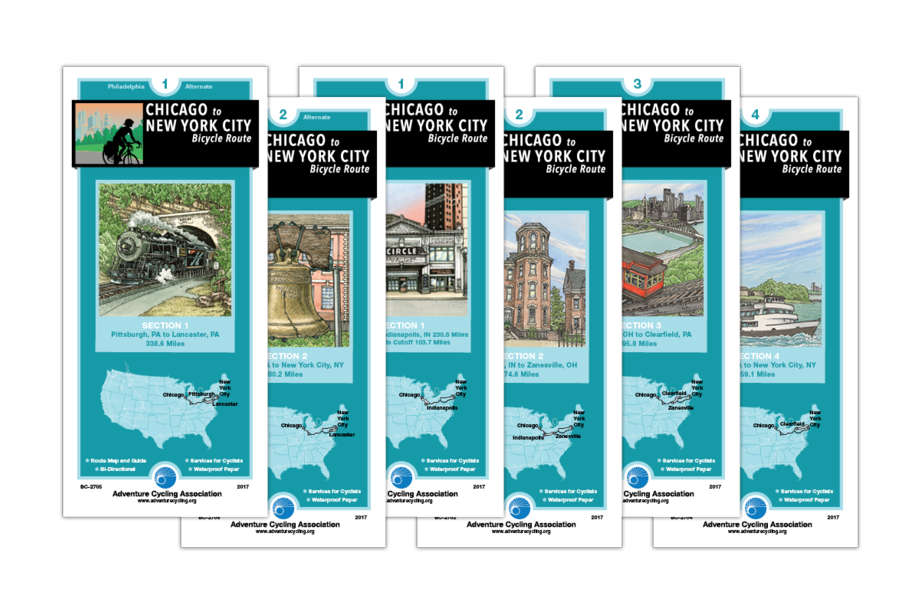 Section 1: Chicago, IL to Indianapolis, IN

I ride a recumbent trike. Is the GAP and C&O rideable with my wide front track?

The route looks great. The best option is to get all the maps, ride to Phila. first, up to NYC, then back to Pittsburgh following the northern route.