Celebrate America: Ride the TransAm & Get Pie at Cooky’s 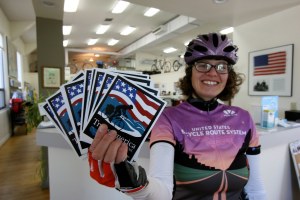 In December this last year, I made an offhand comment about riding from Eugene, Oregon, to Washington, D.C. Less than a month later, the plan moved off my “joke” list onto my “actively pursuing” list, coupled with a research project on bicycle tourism as an economic development vehicle for rural communities. Then, Adventure Cycling Association offered me an opportunity to hand deliver window decals to businesses along the TransAmerica Bicycle Trail as a way to bring awareness to the route, and to provide me with a way to engage community businesses.

In Golden City, Missouri, I stopped at Cooky’s Café on a recommendation from a friendly man in a truck who took my picture at the Missouri state line.

Cooky’s stands as an institution for hungry cyclists. As I looked through the cyclists’ logbook (Cooky’s has an archive of these logs going back more than 20 years), one entry caught my attention, “Here I thought I was the only one who ever rode a bike across the country.” We think that, don’t we, until we get out on the road and the trail and encounter other cyclists every day. 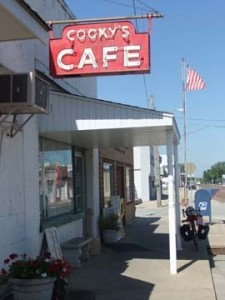 At some point the Cooky's crew came to understand that cyclists went through their town, cyclists like to eat, and cyclists talk to other cyclists. Now, you may be climbing Lolo Pass in Idaho (on your way to Yorktown, Virginia), but the cyclists you encounter on the road will not only offer you a break from the climb, they'll tell you specifically, “When you cross into Missouri, go to Cooky’s Café in Golden City. They have the best pie on the whole route.” You just have to ride to Missouri to get it.

I had one route decal left. Cooky’s needed it.

I left Cooky’s pleased to bursting. The decal glowed in the morning light, its red, white, and blue reminding me again that the TransAmerica Bicycle Trail celebrates America. Riding the trail has a unique way of bringing us home to our country. We find it by being out in our country -- on a bike. We find it in a place like Cooky’s.

I had to laugh reading this post as I have a friend who did a very similar trek last year and mentioned Cooky's as a great place to stop! Thanks for sharing.

If you head north a bit and visit Chicago, feel free to visit us! We have many bikey people that would be happy to host you. www.thechainlink.org. And feel free to post pictures and updates on your trip!

I love knowing you're doing this, Heidi. Thanks for sharing your journey and spreading the word about Cooky's and the TransAmerica Bike Trail. Safe journey to you.