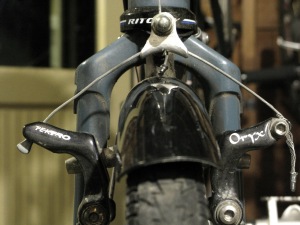 Purchasing new rim brakes for your touring bike isn't something you will need to do very often. More likely, you will blow through a few sets of brake pads before the thought of new brakes even enters your mind. However, sooner or later the day will come when your brakes aren't putting out the stopping power they once did, which is often due to worn out springs.

The vast majority of touring bikes are built with cantilever brake bosses, which as the name suggests, are designed to take cantilever style brakes. The reason for this style is that they allow you to run wider tires, and provide a lot of space for fenders.

As far as cantilever brakes go, there are two styles available, and this is where you want to be careful. Cross cantilever brakes are often found on cyclocross bikes, and offer a lot of braking power. Over the past few years, they have rapidly increased in availability, but aren't always the best choice for touring bikes. While their braking power is certainly appealing, their brake arms are positioned almost parallel to the ground, which can easily interfere with front and rear racks. To get an idea of what I'm talking about, check out the Paul Neo Retro brakes.

For a more upright brake that doesn't get crowded out by your rack, and is also easy to reach for service, there are other traditional cantilever brakes available that provide more than enough braking power for loaded touring; some examples include Paul's Touring Canti, the Tektro Oryx (Pictured above), and Avid's Shorty 4. These will all give you great stopping power, provide room for wide touring tires, and space for fenders.

For the easiest replacement route, if you liked what you had before, stick with it.

i had the cantilever brakes(TEKTRO ORYX BRAKES) on my Surly LHT 2008 Touring bike and the Tektro Oryx had verypoor stopping power on fully load touring and in Aug,2012 i added the (V-BRAKES) Avid single digit 7 with Avid Shorty Cyclo-cross brake shoes that take road pads shimano dura type and Cane Creek V-Brake levers and i now have 100% more stopping power then the Cantilevers brakes

A safety point maybe worth mentioning(?) is the use of a front reflector arm or fender under the straddle cable. All bikes have something from the factory but people have been known to remove them.

If the main cable happens to break, the straddle cable can come down on the tire and trigger an 'over-the-handlebars' spill.

Some sort of straddle cable 'catch' would have been nice in that event.

I find my bike which has shimano br-r550s stops a bit better than my bike with paul touring cantis. Both work very well. However, the br-r550s have a deep groove for the straddle cable, which can make popping it loose difficult without a quick release in the path somewhere.