Chances are, if you’ve done a bike tour, you’ve developed an affinity for maps.

A good gander at the map does much to quell pre-trip jitters. If you’ve traveled with a partner, you might have spent the last moments before sleep sharing pillow-space in the tent as you both gaze up at a map illuminated by headlamp beams while discussing the next day’s route. At the end of the ride, that map becomes a souvenir, the guide lights of your journey’s story.

Maps are the illustrations of possibility, the places we haven’t been but would like to go. Spread out a map of Alaska and start dreaming about Resurrection Bay, Kukaklek Lake, Naknec, and Quinhagak. Maps record history as borders are established, fought over, and redrawn. Each map tells us about its maker, what they deemed important enough to include and what they selected to leave out.

Maybe your love affair with maps started with the thick manila elementary school map of the USA that unfurled from above the chalkboard, the squeak of spring rollers announcing its descent. Or was it the map of Tolkien’s Middle Earth while reading Lord of the Rings? Maybe it grew slowly out of planning your own voyages over the years: road trips and river trips, high-mountain backpacking adventures, and navigating a new city before the advent of the GPS. Every map offers new possibilities and demands a new way being folded.

So, who is gonna make the map?

When Adventure Cycling was just a seedling known as Bikecentennial and the dream of over 4000 people cycling across the country was just taking shape, the question of mapping a route was forefront: Where would the route go? Who would do the leg-work of researching it? Who would test-ride it?

Since co-founders Greg and June Siple were on Hemistour, and Dan Burden was sick with hepatitis, the momentous task of planning the route fell to Lys Burden. Dan D’Ambrosio wrote about it in Adventure Cyclist’s July 2006 issue:

Lys had found an extraordinarily well-paying job in a Columbus beer factory. In one month she earned $1300, enough to finance her initial research of the trail, which she began in November of 1973, traveling from the Williamsburg area to Missoula. She was determined to stick with the research for as long as it took, which turned out to be quite a while.

"Lys Burden was the architect of the Trans America Bicycle Trail," said Stuart Crook, Adventure Cycling's former Leadership Director. "When I joined Bikecentennial in the summer of 1975, she had been working on it, designing it, for two years." 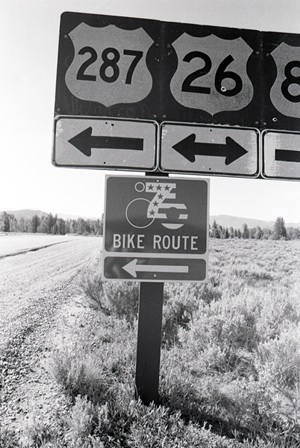 In late 1973, Jim and Es Kehew, an active middle-aged couple from Pennsylvania, had written to Greg, offering to help by riding the trail in the summer of 1974.

Dan also heard from Jim Richardson and Linda Thorpe, a young California couple who had read about Bikecentennial in Bike World magazine. Jim and Linda announced that they were going to ride across the country on a tandem, courtesy of a sponsorship from Weight Watchers. They wondered, did Bikecentennial have any suggestions for a route? Suddenly, Dan and Lys had two route-testing teams. 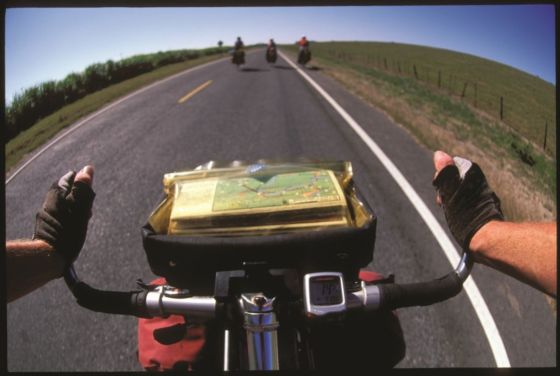 If you’re a map lover, help us create the latest Adventure Cycling maps by donating now. 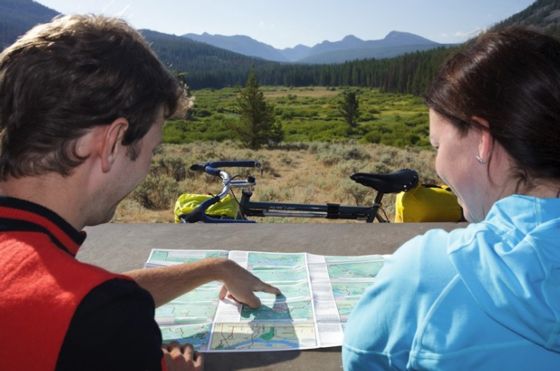 Donate $250 or more to have your dollars matched by a generous donor AND you’ll receive your choice of either first edition mapset: Texas Hill Country or Chicago-New York and a mapcase. All donations over $100 receive a mapcase.

You Are Here: Personal Geographies and Other Maps of the Imagination by Katharine Harmon

A History of the World in Twelve Maps by Jerry Brotton

The Power of Maps by Denis Wood

From Here to There by Hand Drawn Map Association

Leave us a comment and tell us about your favorite map or book about maps.