Many state Departments of Transportation use rumble strips as a way to improve safety on highways with high numbers of run-off-the-road crashes. Due to the relatively low cost to apply, some states are beginning to apply them to rural roads as well. When properly implemented, rumble strips can improve safety for bicyclists by providing a protective (though only auditory) buffer between them and automobile traffic.

However, many rumble strip applications cause bicyclists more harm than good. They are uncomfortable, if not impossible to ride on; they can cause damage to a wheel as well as increase numbers of flats; and they are often located such that they reduce the shoulder to an unrideable width, forcing cyclists to ride in the traffic lane. It is also important to note that once applied, they are at least nine times more expensive to remove after the fact.

Some states such as Alaska , Colorado, Wyoming and Washington have implemented policies that ensure cyclists needs are considered in the decision to apply this solution.

Properly applied rumble strips on US 20 in Wyoming.

Montana Department of Transportation (MDT) is in the final stages of updating their rumble strip guidance, and while they are working with us and Bike Walk Montana to ensure that bicyclists are represented, when it comes to actual implementation of rumble strips they are still making decisions to install rumble strips that are unsafe for bicyclists. This directly contradicts MDT’s adoption of Vision Zero, an initiative to improve safety for all road users with the end goal of zero traffic fatalities in Montana. The interpretation of the policy as it stands today, values motorists’ safety over cyclists’.

We have voiced our concerns that cyclists needs and safety have not been adequately addressed in two roadway construction projects planned for May 2015 that include rumble stripping that would negatively affect our TransAmerica Trail and Northern Tier routes. They encompass the following stretches: 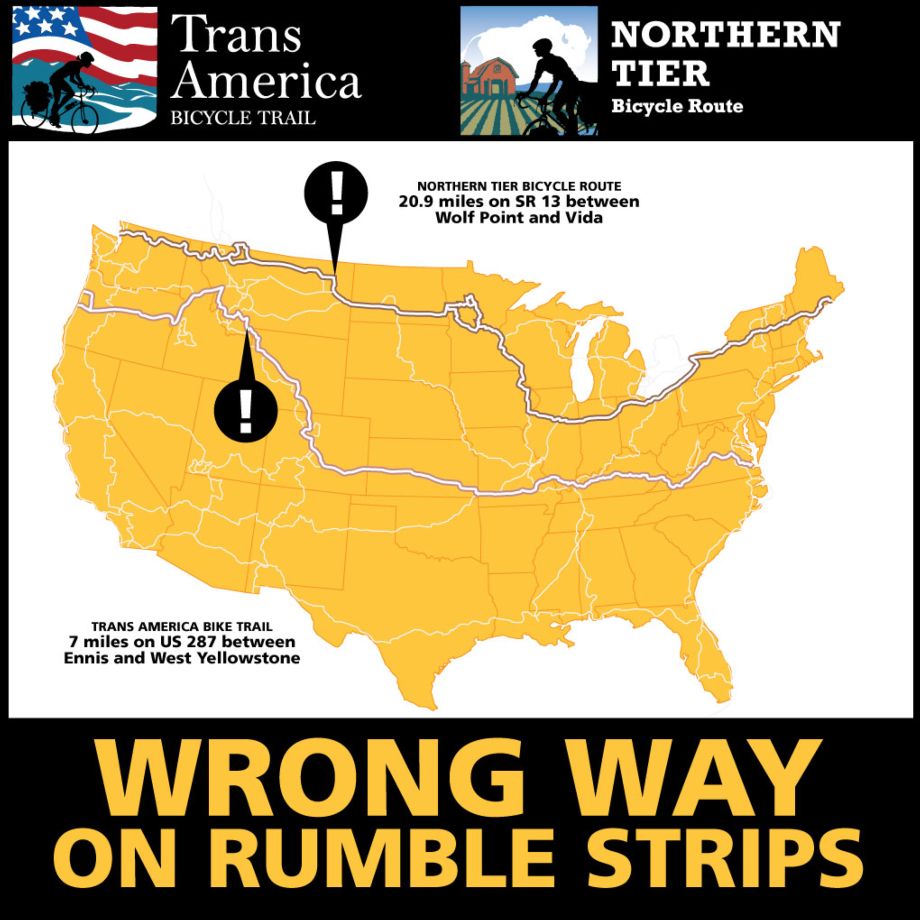 The rumble strip application on the Northern Tier section will provide 1-1.2 feet of remaining shoulder – not enough to actually be useful to cyclists and this road sees quite a few trucks, almost 20% of the traffic. 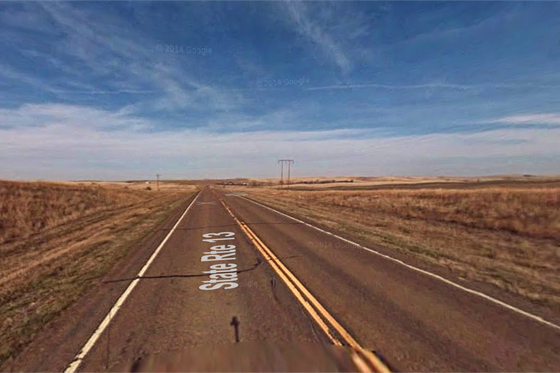 The section on the TransAm has low traffic numbers but does have RVs traveling along the corridor alongside high bicycle use with shoulders of varying width. In this case, MDT originally determined they would put the rumble strip along the edge of the pavement – forcing cyclists to ride on the white line or in the traffic lane. Neither of these scenarios is safe for cyclists and we question the true need for the rumble strips based upon the crash data they have provided.

After further conversation, MDT changed the project to narrow the travel lane by .5 feet and plans to rebuild the shoulder to a maximum of 3 feet. However, this still doesn't meet the Federal Highway Administration's minimum standard of 4 feet of clear shoulder after installation to be safe for cyclists – especially those with a wider profile due to panniers.

When Melissa Alder, co-owner of Freewheel and Wheel in West Yellowstone and resident very familiar with the stretch of US 287/TransAm Trail slated for construction, learned about the planned rumble strips, she went out with her camera and measuring tape to take a closer look. 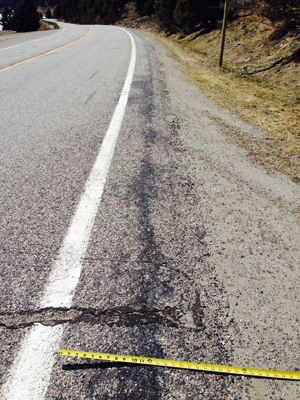 Eastbound on US 287 before Hebgen Dam showing narrow shoulder conditions.

“As a local bike shop and route resource, we find ourselves sending visitors looking for an experience outside of Yellowstone National Park on that very stretch of highway on a frequent basis to enjoy on a bicycle,” Melissa told me. “I’m concerned that adding this rumble strip will put a lot of people at risk.” 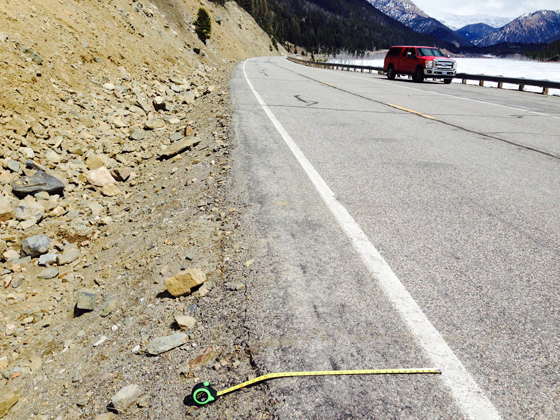 US 287 on Quake Lake roughly near mile marker 3. (Tape measure is extended 3 ft.)

If these two projects move forward as planned, both stretches of highway will become unnecessarily dangerous for the thousands of cyclists who ride the TransAmerica Trail and Northern Tier routes each year. If MDT is serious about Vision Zero, they will not implement rumble strips along these popular bicycle routes and trade motorists’ lives for bicyclists’.

In the short term, our aim is get the rumble stripping portion of these projects removed.

Our long term goals are to continue building our relationship with MDT to ensure they adhere to the following guidelines in the future:

1) to consistently gather and use road-departure data for the safety of all users;

2) to gather bicycle use data and consistently consider safety along potential and known bicycle tourism routes;

3) to conduct in-depth analysis of this data that clearly shows justification for decisions to install rumble strips and make it available to the public;

4) to stop putting in rumble strips on roads with narrow shoulders;

5) to widen shoulders instead of, or in addition to, placing rumble strips; and

6) to hire a MDT bicycle and pedestrian coordinator that will be involved at a higher level in the decision making process and consult with/involve bicycle representatives when implementing the rumble strip guidance.

Your voice will help put needed pressure on MDT on both these fronts. Contact MDT by Wednesday, April 29 to ensure that they accommodate cyclists in their rumble strip project plans. Visit our Call to Action page for more information and an email template, and be sure to share this alert with other cyclists.

Non-cyclist DOT and law enforcement employees around the country have been known to install rumble strips and implement other hazards and impediments to legally penalize and plague bicyclists. Stopping Montana DOT will be like stopping ball capped pick up drivers buzzing you along the Northern Tier. I'll do what I can but I'm not optimistc about changing inbred hatred toward cyclists.

I actually like the rumble strips IF done correctly because they can warn you, as a bicyclist, of a car crossing the line due to the noise the car makes. Problem is the road builders don't do it right, those strips should be on the line and not as wide leaving enough space on the other side for a cyclist to safely ride.

Rumble Strips get worse as you cycle into the apex of a curve where the shoulder and white stripe usually get narrower. Extremely dangerous because you are riding along, to the right of the rumble strip with room, and suddenly the shoulder narrows. You either have to ditch, stop, or try to cross the strip into the roadway with a bone jarring rattle. I rode a 20 mile section of poorly implemented rumble strip on tour between Warrensburg and Clinton, MO that forced us into the road on corners, the most dangerous spot.

In addition to "rumble strip", Ohio has a practice of "rumble stripe" that cuts narrower grooves in the space used for the white edge line. Narrower. Doesn't eat up my berm. And warns drivers earlier of their wandering.

why not lobby congress, that if these roads must be rumble stripped separate bike lanes well away from the road or alternative lanes be rerouted. I'm always apprehensive about sharing the road with motor vehicles. There's always some nitwit falling asleep or not paying attention. It seems to me that anyone on the shoulder is like a magnet for one of these drivers. There could be no one around for miles and one reads about some hitch hiker, cyclist, or some motorist broken down is hit and killed.

If there's any Federal grant money behind these projects, take it up with FHWA directly. Federal law prohibits using many grants for rumble strips that endanger cyclists, but oversight is very lax and many state agencies say this is just advisory.

(B) Inclusions.--The term "highway safety improvement project" includes a project for one or more of the following:

What's the funding source for creating these hazards?

Any grant funding behind them that would make compliance with FHWA guidance mandatory? e.g., High Risk Rural Roads Program has statutory language allowing funding of rumble strips only when they do not impair bicycle access or safety.