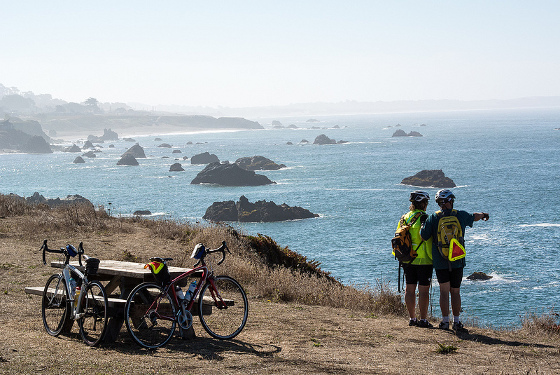 America’s rising interest in active travel and the recognition of cycling as an important cog in the travel industry is by no means a small factor contributing to the boom in bicycle tourism. Cities are starting to take advantage of the dollars doled out by the increasing number of bicycle travelers. Portland, Oregon immediately comes to mind when exploring cycling-centric destinations. Even Washington DC's Capitol Bikeshare provides tourists the opportunity to meander around the Capitol’s attractions by bicycle for the day. But cities aren’t the only places changing the landscape traveled on or with a bicycle.

I had the good fortune of chatting with Gary Helfrich, the executive director of Sonoma County Bicycle Coalition (SCBC). Let me begin by outlining Gary’s massive amount of street cred. As if being a founding member of Merlin Metalworks and an inductee into the Mountain Bike Hall of Fame isn’t enough, Gary’s experience as an acclaimed frame builder, tenure as an elected official, degree in transportation planning, and stint as a county transportation planner ought to round out his bona fides. This mosaic of experiences imparts Gary with keen insights on bicycle advocacy and how to attract two-wheeled tourism.

Gary shared what he felt the Sonoma County Bicycle Coalition is getting right, and how others can do the same. Sonoma County has a vast array of resources elevating bicycle tourism to the second-largest tourism draw to Sonoma County, second to the infamous wine industry. The county's resources spawned the area's popularity as a winter training ground for professional cycling teams. Some of the stats include 1,400 miles of quiet, rural, paved roads (roughly enough to stretch from the Sonoma Coast to Colorado Springs if laid end-to-end), the county’s location at the confluence of several state and national bike routes, the Pacific Ocean, two mountain ranges, the red woods, and wine country. Leveraging these resources is where Gary’s organization steps into the fray.

Many of the secrets behind Sonoma County’s bicycle tourism success lies within the SCBC. Here are Gary’s six steps to attracting bicycle tourism to your neck of the woods.

2) Share the wealth: Partnering is always a great idea. The SCBC really shines in this category. They work closely with their bureau of tourism, elected officials, wine makers, hotels, and several other stakeholders to make sure everyone is getting a piece of the pie.

4) Share local stories: Find stories of local shops, hotels, restaurants, and cyclists and share why bicycle tourism is important to them.

5) Identify the brand: What is your area’s brand? What do you want people to take away from your area? How can you leverage your area's resources? In a way, this is a wrap up of all of the previous steps.

6) Document what you are doing: Perhaps the most difficult step or the most tedious, but one of the most powerful. When Gary explains that Levi Leipheimer’s Gran Fondo, based in Sonoma, brings more money into the county than the sporting giant NASCAR’s Sears Point race, people tend to listen.

Beyond these steps, Gary also offered up some advice to which he attributes much of SCBC’s success. He says always be a partner and never an adversary. Build trust with your elected officials. And finally, always have fun. “If you aren’t having any fun, why do it?”

Love this! I'm already a member of Adventure Cycling.