Bridges, Trails and Signs – Oh My! 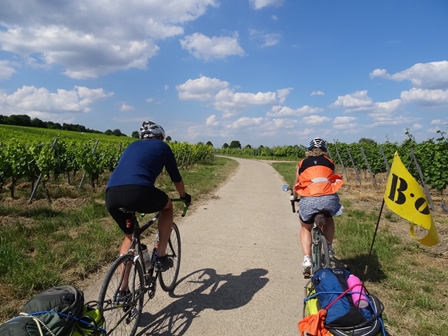 This is a series of posts by Ginny Sullivan, director of Travel Initiatives which highlight the lessons learned from a month-long bicycle trip in Europe. Ginny, her husband, Tom and friend, Neal cycled on several different bicycle tourism routes and their journey took them through nine countries. A previous blog post provided the high points of the tour, however  nothing could have prepared them for the reality of touring through some of the most beautiful places on earth while witnessing the institutional support and high visitation on the routes .These trip reports focus on 1) big lessons learned; 2) infrastructure and wayfinding; 3) Multi-modal connections; 4) Tourism promotion and the role of the hospitality Industry. 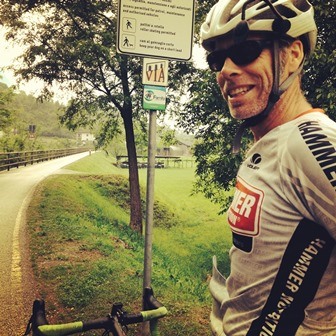 Essentially in the United States, we have a system in place that allows cyclists to legally ride on the roads, unless prohibited by a state law or local ordinance.  While this is hugely important, it doesn’t ensure that roads will be maintained for cyclists (think poor shoulder pavement) or that the routes and trails will be signed or connected to multi-modal hubs (next week I’ll talk about what I learned about trains and planes). These were some of the major reasons I wanted to experience bicycle travel in Europe. How are they doing it? What can I transfer to the US?  How can this experience make me a stronger advocate for improvements?

Well, I found out there are some things we can do, must do, to make bicycling more accessible to all. Because in northern Italy, Switzerland, Germany, Belgium and the Netherlands – bicycle travel is made easy. It’s better if I show you.

Let’s start with the big one – the routes themselves.  Granted, I picked areas of Europe that were high bicycle tourist designations. My routes included: 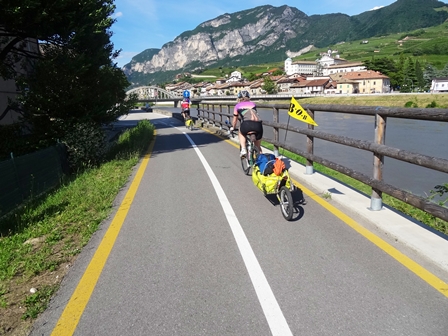 The Via Claudia Augusta and regional bike trails in the South Tyrol region of Italy, near Trento and Bolzano/Bozen. 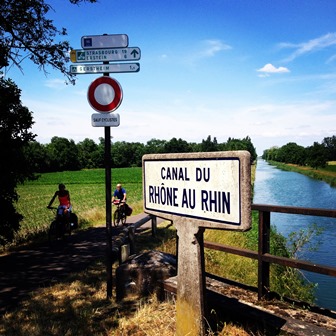 The Rhine River Route/EuroVelo 15 through Switzerland, Germany, France, and the Netherlands (it also touches Liechtenstein and Austria). 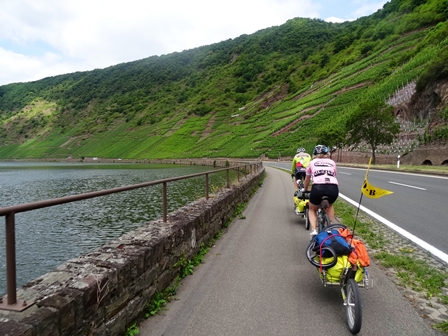 The Mosel River Route in Germany. 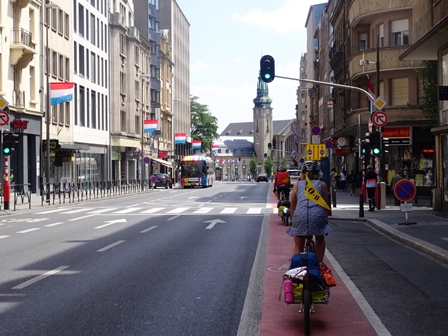 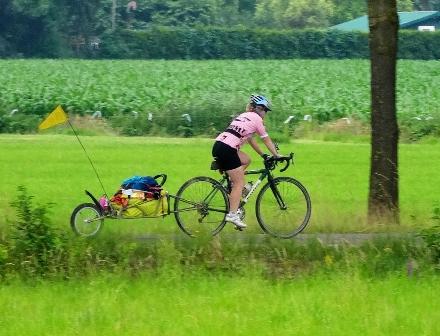 The numbered bike routes in Northern Belgium and the Netherlands. 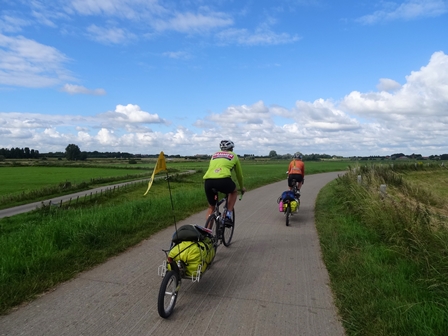 Tell me, why do we fight over putting in bicycle infrastructure in the US? We balk at the price tag of a trail, but don’t blink an eye at the cost of a highway or a signalized intersection. My friends in DC will tell you it’s become a political hot button. 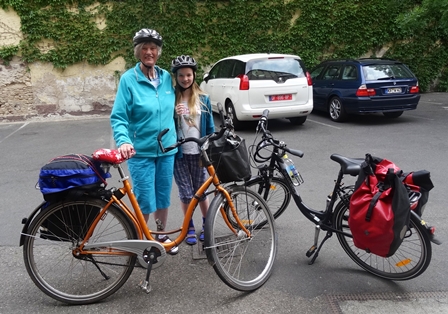 I wish I could take everyone on this bike trip. I wish they could see the health and well-being of the people of all ages on the trails, the financial impact cycle tourism is having on the local (and in many cases stressed) economies, the mobility created by connections to rail and air, and how FUN it is to see the world at the human-scale.

Short of this. I can demonstrate through a few pictures what I found to be absolutely key to making the tourism routes work.  Of course, they include wayfinding and signs, which are not necessarily the same thing. 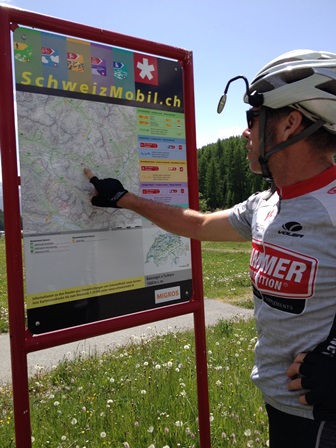 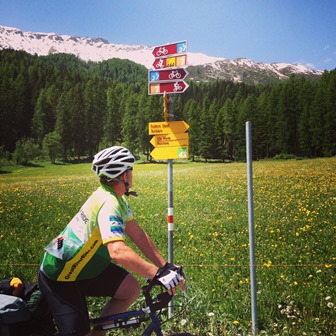 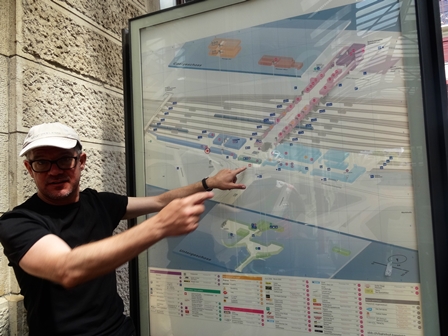 In Switzerland, the SwissMobility Foundation ensures every citizen has access to information for locating key destinations. To them, bicyclists, rollerbladers, hikers, mountain bikers, train passengers, motorized drivers and walkers are all important modes. They provide wayfinding information at key hubs, like train stations, at significant intersections, in city centers, and have an easy to use mobile app. 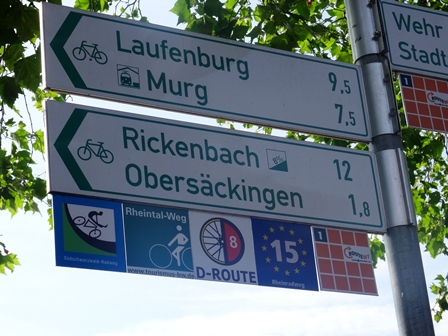 All along the routes I followed, the trail signage was amazing. Using what we call “fingerboards” they provide a single sign post with destinations listed  in multiple directions. While in the US we don’t recommend fingerboard signs on highways and streets (that might force a cyclist to have to stop and read the signs) these are perfectly acceptable on trails – and more importantly, the signs were abundant and allowed for multiple routes to co-designate (or brand) the facility. 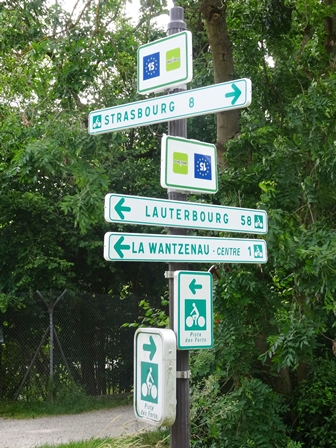 Any time we were a bit hesitant we were off, we’d see a confirmation sign.  In addition to thinking in terms of what the user needs to navigate sufficiently,  the other lesson is to work collaboratively across the transportation – recreation – tourism silos so that no matter what the facility, you can find your way. By the way, can you spot the problem with one of these signs? Goes to show, no country is perfect. 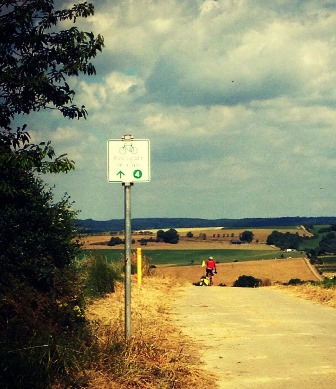 In Luxembourg, though the tourists weren’t as plentiful, the routes were scenic, low traffic and well signed. 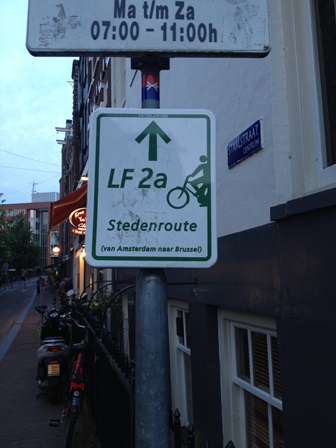 The Netherlands, along with their numbered system (which we followed for two days), there are several longer, regional and country-wide routes that worked excellent for us. 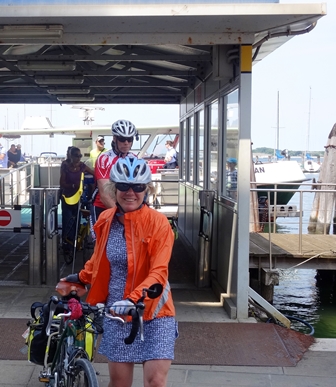 As you can see from the routes I traveled, there was a great deal of water and a large number of cities with a lot of traffic, industrial sections and people. Thus, bridges and ferries were very important to our navigation. 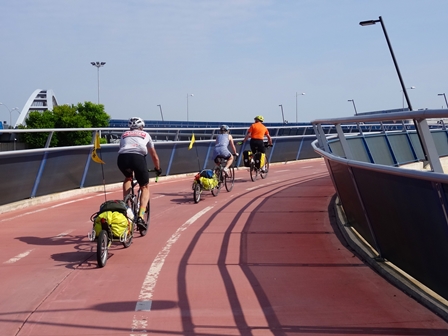 In Italy we island hopped on the ferries and made our way through Padova via an impressive bicycle bridge. 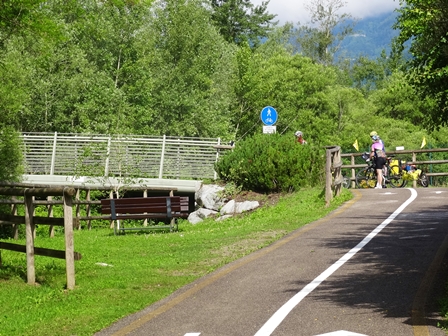 As we traveled through northern Italy and along the Rhine River Route, we crossed the river continuously and almost always on infrastructure for bicycle and pedestrians or with a designated space for bicycles. 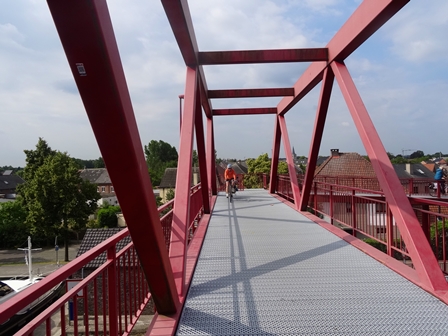 Through the Netherlands, we had so many bodies of water to cross that we lost count of the number of bridges and ferries.

And by chance, we came across the most amazing piece of infrastructure every built - the Hovenring in Eindhoven, Netherlands. A suspended bicycle roundabout - this was pure heaven (take a ride via YouTube).

All in all, we can do better in the US at providing information to people and facilities for people. Whether traveling on foot or by bike, in the city or out on a scenic byway, I think there is a bar we need to reach for and I’ll be doing my best to work toward safe, inviting facilities that include helpful wayfinding across North America.

Don't be too disparaging of the cycle trails in the US. I've cycled the Katy Trail and the Allegheny Passage/ C&O Canal Trail and they are excellent. I'm from the UK and our cycle paths are rubbish.

The Dayton, OH area has some wonderful bike trails. When we pedalled through in 2007 we could not figure out where the MUP connected to the "share the road" route, or when to come up off the path to a bridge to cross the river. There were NO signs letting an out of towner know where anything was. The map we had from the county was about useless; we knew there was a trail that crossed the one we were on, but no idea of where, or how to get to it. Nobody we asked knew anything. We tried three bridges before we had the right one, then we couldn't find the bike route. I hope they have improved it!

Slowly the US is making progress in select cities, but progress is slow. Linked is a post and an image gallery of alternative transportation infrastructure in Strasbourg, France