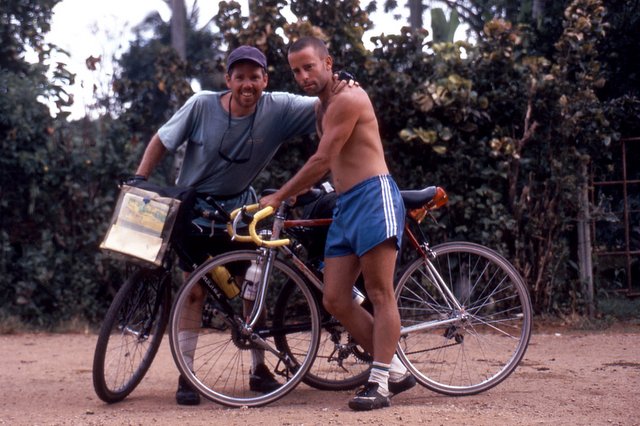 One of the few racing cyclists I met while I was in Cuba was a young man named Alexie. He came over to chat with me in a small town in the province of Pinar del Rio (west of Havana).

He explained that he dreamed of painting his bike white and blue. But the water bottle he owned was yellow. Water bottles in Cuba, like everything else, were in short supply. He had searched for months and couldn’t find one to match his dream bike.

It just so happened that I had the coveted white-and-blue water bottle.

He held up his old, yellow water bottle with the black cap next to mine … assuring me that they both carried the same amount of liquid. Then he asked if I would be willing to trade.

I didn't hesitate. I just handed it over.

Alexie beamed. And I thought, "What an easy goodwill gesture."

Soon after, I learned that there is a difference between drinking from a white-and-blue bottle versus a yellow one ... especially if the yellow one is filled with rum.

I took a huge swallow and almost passed out from the unexpected rush of alcohol. Alexie and his friends couldn’t stop laughing. I laughed, too, once I’d caught my breath and wiped the tears from my eyes.

That journey was a dozen years ago — and to this day, if I hold that yellow water bottle up to my nose, I get the faintest whiff of Cuban rum. I imagine a bike racer in the hot Cuban sun, pedaling in cadence with a pace line. He reaches down and grabs an old white-and-blue water bottle.